Guy Dangerous is the tough flame red hair, action man and adventure Indiana Jones of the Temple Run video gaming world. Here's how to get a Guy Dangerous Temple Run Halloween costume look for yourself.

Guy is strong, athletic, tough and fearless; he is pretty much everything that I want to see in a real life man! The main hero character Guy runs off on his adventure style escapades, traveling over rapids, racing over many obstacles and picking up a load of gold and treasure along the way.

I don't get much of a chance to sit and play games but the second game in this series is my favorite way to relax and wind down in an evening or odd moment. So his is the costume I'd personally pick for my husband to wear at Halloween, although he doesn't know it yet. 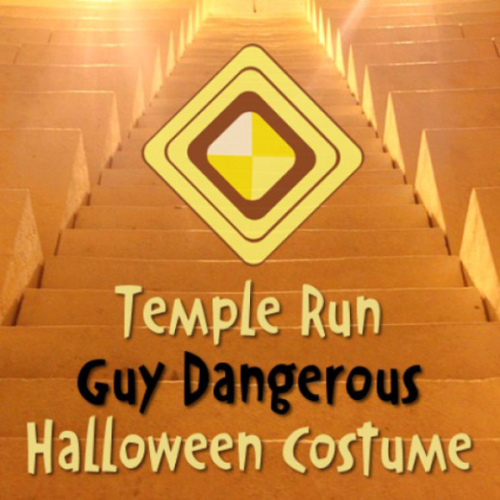 Image Credit: Original image shared by PixelAnarchy on Pixabay with a CC License

What a character and what a name. What man wouldn't want to dress as a gamer hero with danger in his surname for either Halloween or cosplay? He looks a little bit like a cross between Indiana Jones from The Raiders of the Lost Ark and Jack T. Colton from Romancing the Stone.

The main difference here is that there is no cool hat or a bull whip but some very memorable and bright red hair instead. Either way this character really rocks as a sexy male icon that is worth dressing up as. 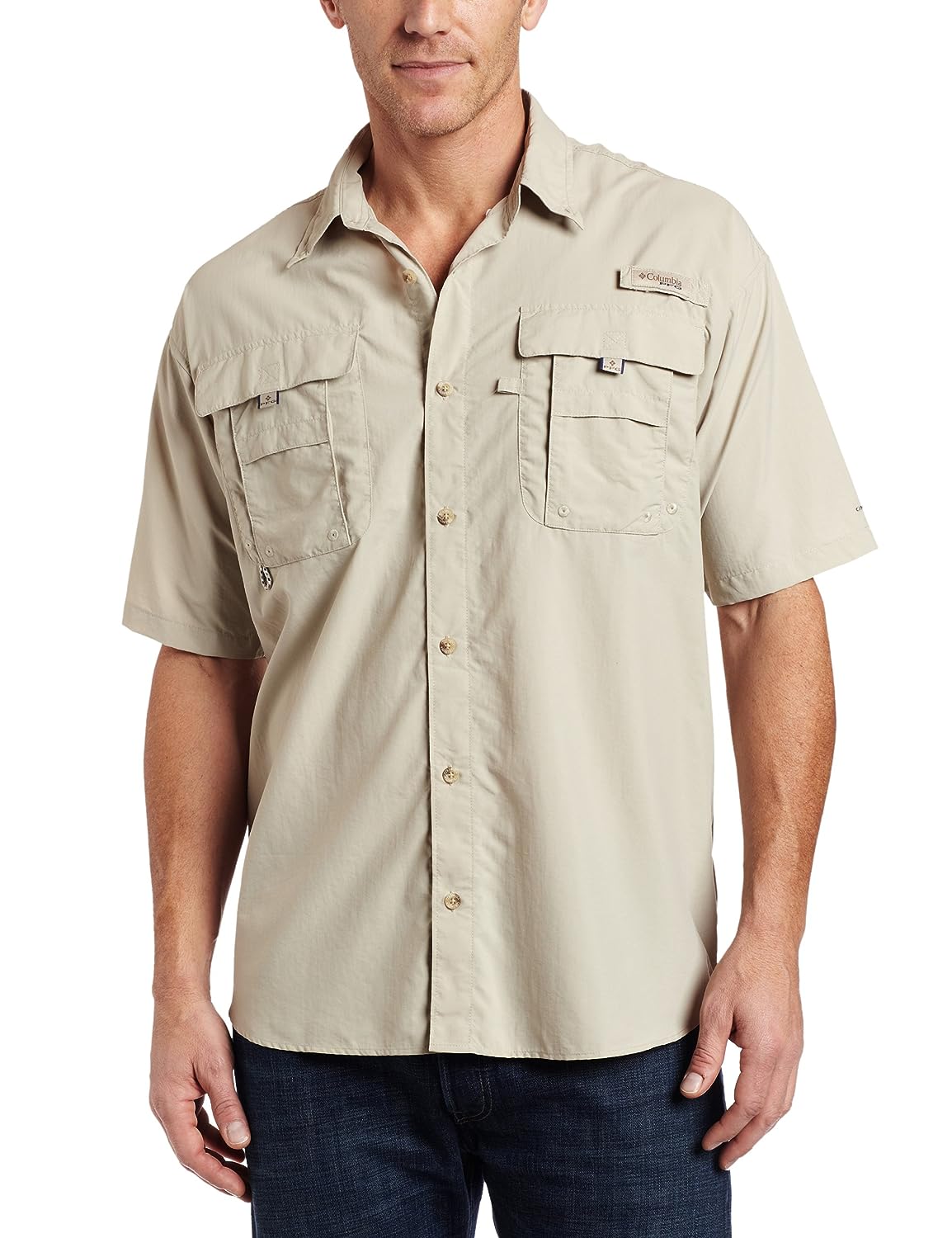 Get a Men's Shirt in a Fossil Color Choice on Amazon.com

UK Readers get a Mens Travel Shirt from Amazon.co.uk

You need a short sleeve shirt which is practical for adventure. So pick out a natural color camping or hiking shirt in a creamy tone. Guy actually wears a tan color, sometimes it looks more like a rather pale green, shirt with a collar.

He wears this left slightly open at the neck and it has with buttons down the front. His has short sleeves but they are ripped off and ragged around the edges. It is worn tight against his upper body so you might want to go down a size if you can to get that same effect and show off your own bulging pecs.

This shirt has the right kind of adventure look but I'd rip off one of the sleeves while turning up the other and cut in some ragged edges with scissors to give it a real worn in look.

This is a good looking example of an adventure shirt. Although this character doesn't have front pockets in his shirt, I'm thinking how handy the pockets would be for storing extra little items that he picks up on his journey.

Alternatively, you could also get a long sleeve shirt and cut the sleeves short to show off your muscles! Then fray the edges to get that real explorer look. It really needs a few rips and tears and a bit of dirt to look pretty convincing and well-worn.

Maybe you could also add in a few old blood stains too for further effect. There is no need to use real blood though since fabric paint offers a much safer method.

Add on the Grime and Dirt!

Guy will not look realistic if he is all neat and clean. He's been on the run for like forever you know. His clothing should look worn, stained and ripped and he will be covered in dirt and grime from all his numerous escapades.

After a while, all the running, climbing, jumping, swimming and leaping over shooting flames is going to take its toll on this character. So use some clever make up to get that real action explorer style.

Fake Blood at Amazon.com. Look for some fake blood that you can use but be sure to check whether it is suitable for skin if you want to put some on yourself.

Some of these are only recommended for use on fabric or other materials such as plastic and glass. It can be very useful for Halloween in general and look good to add a few splatters to Guy's shirt at least. 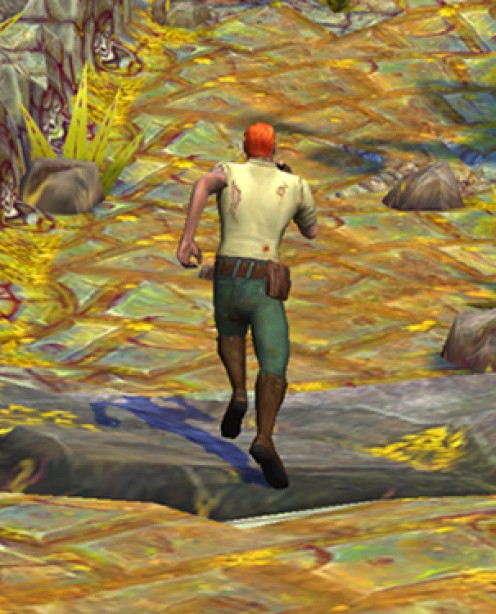 The shirt of Guy Dangerous is ripped and torn at the back and you can also see his belt pouch too. This character makes the Temple Run game really cool.

2: The Guy Dangerous Costume Lower Half!

This character normally wears a very dark shade of emerald green pants or trousers which of course are pretty nice and tight fitting. These don't look new since he's too busy running and exploring dangerous terrains all the time. So try and make them look well worn. Maybe add in a few tears or little rips here and there.

His footwear choice are some sturdy but sleek long brown boots which sit a little way under his knees. These boots were made for running, exploring and for keeping his lower legs safe from snakes and any other unpleasant things that may bite or sting on the way. Make sure your pants, trousers for UK readers, are tucked into the boots in just the same way that he wears his.

The most awesome and eye-catching point about this particular Hero is his really intense and bright color short red hair. He's certainly no shrinking violet. The hair actually has a practical use because it really helps you to keep your eyes on him as he speeds through the game.

Short hair wigs for men in this vivid shade are really hard to find so you might want to use a semi-permanent dye or a red hair spray to make your hair that color instead. 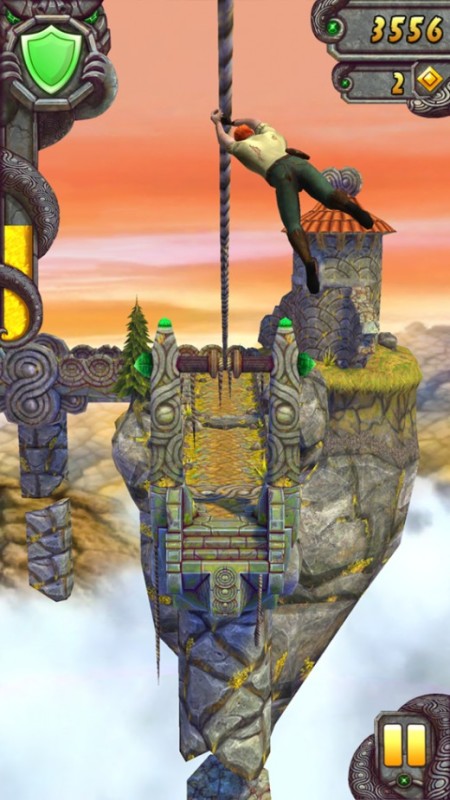 One of my favorite activities was to take this character on the rope zip line and swing him from side to side as he speeds down although you now get a luge to ride on.

Though his muted and natural tone look costume is ideal for him to blend into most of the surroundings, his bright red hair allows you to easily keep your eyes on him as you race him through the app. His hair is a really cool, stand-out feature that if you missed off, well you could be just about any action adventurer then!

First up is the brown pouch that Guy wears which is slung around at the back of his belt. I get a pretty good view of this pouch while he is running. I'm guessing this is where he keeps some small and essential man supplies tucked away.

The pouch is less bulky than a backpack and this tough explorer doesn't need much to be able to survive. You only see the belt pouch when actually playing the game and then it's a little hard to get a great view of it due to the speed at which you're running. I wonder what he keeps in there?

The other main item of note is his brown leather fingerless glove which he only wears on his right hand. So, you just need one of these gloves to look convincing. Unfortunately you'll need to buy two since they normally get sold in pairs but they look really cool for wearing anyway. 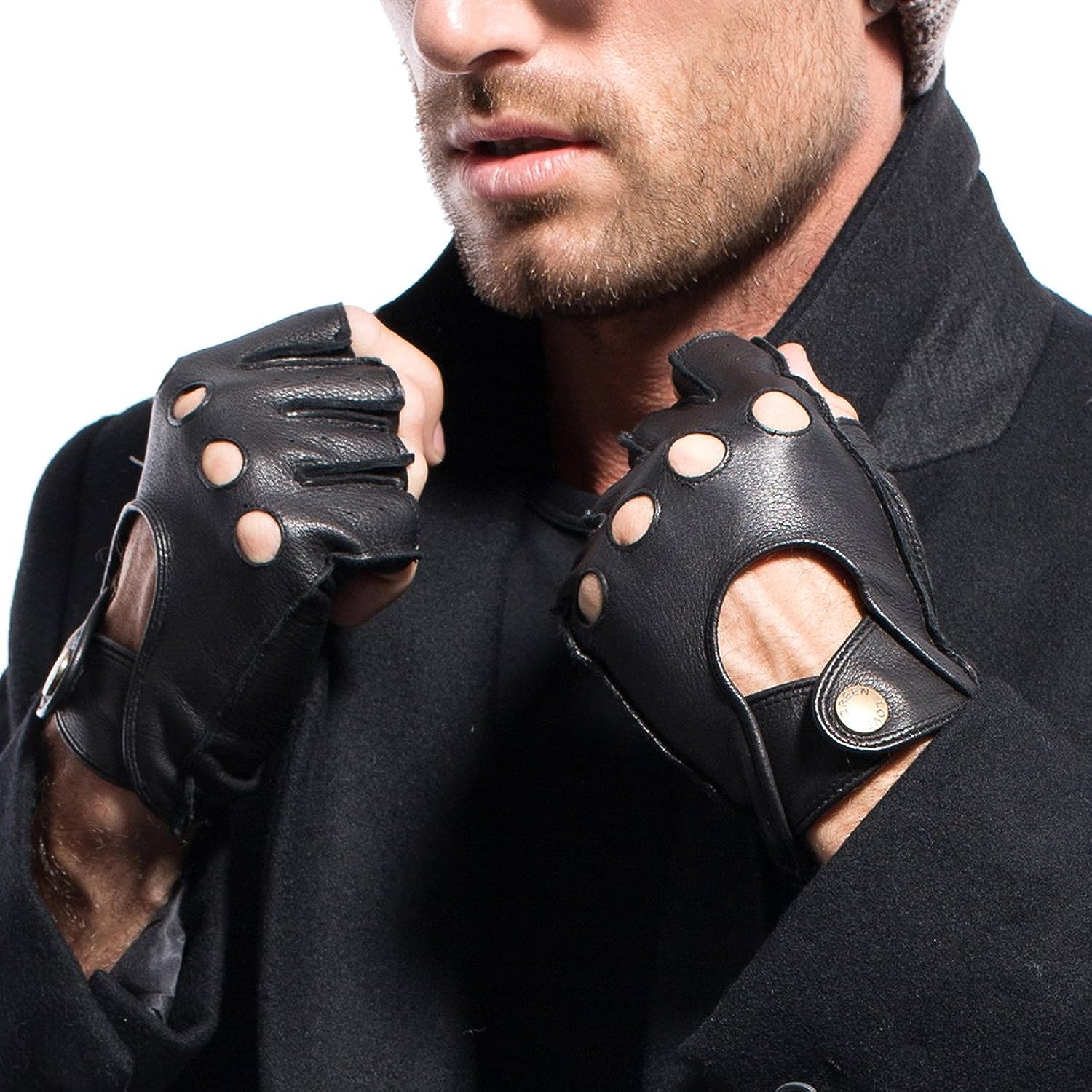 Get these Brown Leather Gloves at Amazon.com

Guy wears a glove which looks pretty similar to the one above. I love the fact that he just wears one glove on his right hand which is a real costume feature. He could start a new fashion trend off with that.

To nail the whole outfit of this character, you could take it a step further and add on one of these two items: a golden idol or a diamond shaped gold coin. The diamond shaped coins are what you collect during your run in the game and actually come in different colors starting with yellow.

The golden idol looks like an aztec or Mayan artifact and not too dissimilar to what Indiana Jones took in Raiders of the Lost Ark. Once you start the game, you've already taken the idol and that's why you're being chased.

Have You Tried the Games Yet?

Run for your life in these thrilling adventure games as you use Guy Dangerous or other fun and tough characters to flee from the Evil Demon Monkeys. While running at top speed you'll also have to avoid numerous obstacles and booby traps along the way and grab the golden diamond shaped coins and treasure in the chests too.

If you love the scene in the 1st Indiana Jones movie where Dr Jones manages to steal the golden idol and then has to deal with a thrilling and fast paced race for his life to avoid the traps he's sprung, you should enjoy these games.

Temple Run: I can never forget the thrill of picking up this free game and playing it for the first time on my Kindle Fire.

Temple Run 2: It's like the first one only much bigger and better with a lot more obstacles thrown in your way like the zip lining and the mine cart rides. I love it even more. Recently they changed it into more of a winter scene adventure, probably to differentiate it more from the first one, but I don't love it quite as much or the new look Guy in it.

Who is Your Favorite Male Action Adventurer?

You can let me know in the comments ...