Hey you guys! I don't know what could possibly be cooler and more unique than a Sloth Goonies costume for cosplay, Halloween or any fancy dress party. This character is the one that everyone remembers from the film, even if they haven't actually seen it.

The best way to channel the Sloth Goonies style is to adopt his awesome superman t-shirt look which I'll show you how to rock right on this page. Keep this hero alive by dressing up as him this year.

The Goonies is a classic adventure style film from the 1980s. One of the best characters in it was Sloth who looked like a hideously deformed creature but was actually one of the Fratelli brothers called Lotney. He was played by John Matuszak who died in 1989.

How to Rock a Sloth Goonies Costume for Halloween and Cosplay 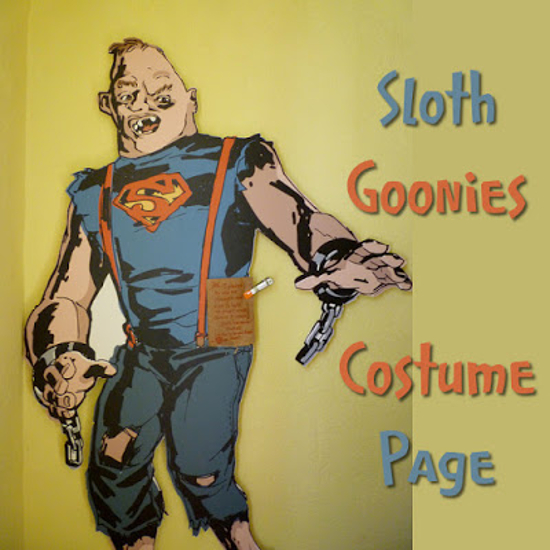 Image Credit: Shared by thirteenthbat on Flickr with a CC License

Unless you were accidentally dropped by your Mum as a baby, like poor Lotney or Sloth was, you probably won't have the required deformed features that you need in order to successfully pull off the look of this particular character. 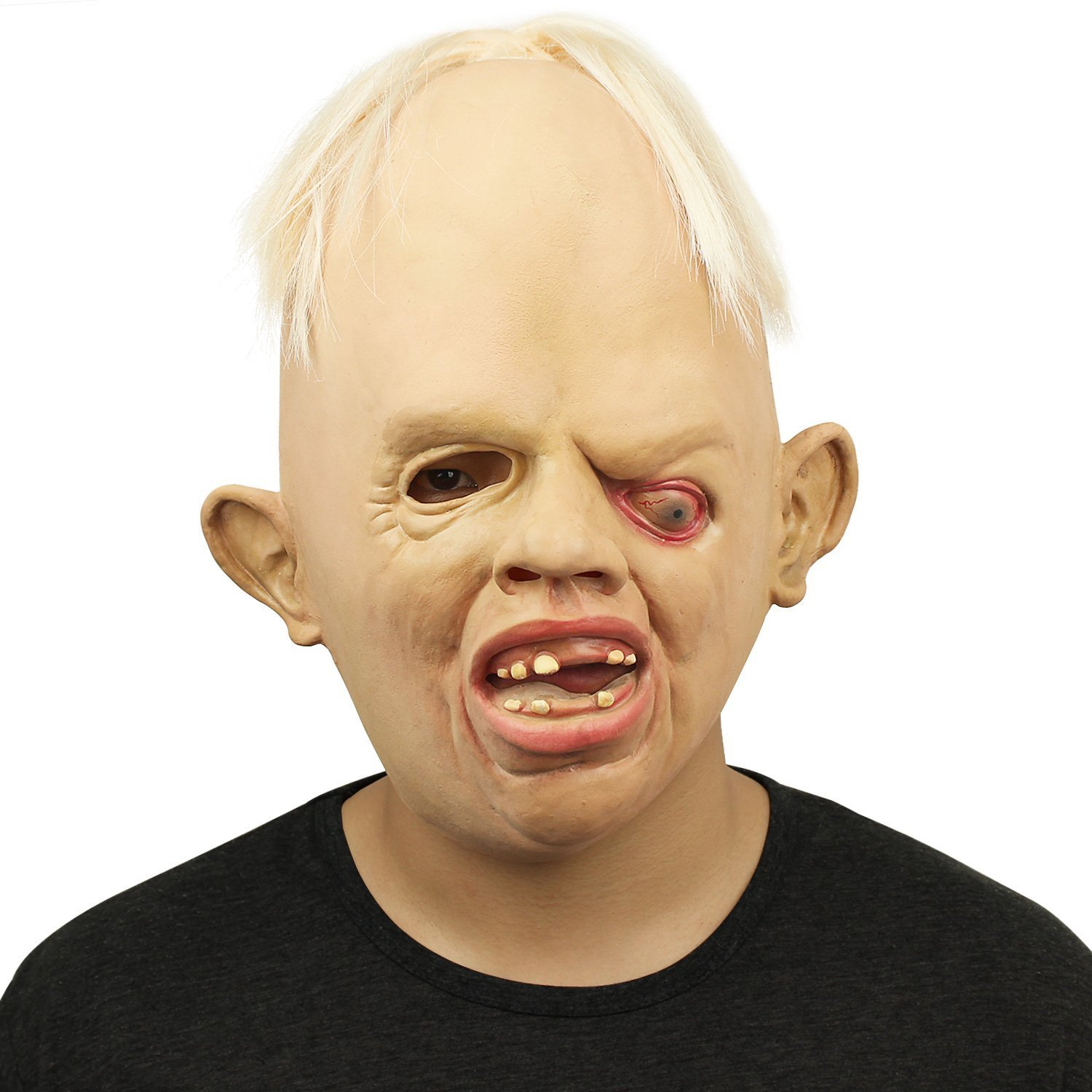 Get this Latex Sloth Goonies Mask from Amazon.com

UK Readers get a Sloth Mask from Amazon.co.uk

A mask will do most of the difficult work for you by instantly giving you his large egg shaped head, big ears, uneven and droopy bloodshot eyes and gums complete with missing teeth.

☠️ I'm seeing that the individual masks for Sloth are selling out REALLY FAST. You can currently get Sloth masks from HalloweenCostumes.com, the ones I have seen are included with the costumes. Also check here on Etsy.

One of the eyes in this mask has been deliberately left open so that you can see which is handy. You get a tuft of blonde hair on this which adds to the realism of it. The nostrils are open to make it easier for you to breathe while wearing it. 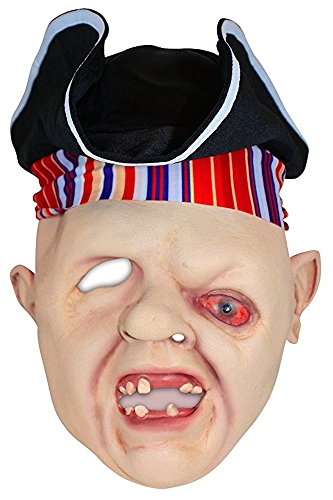 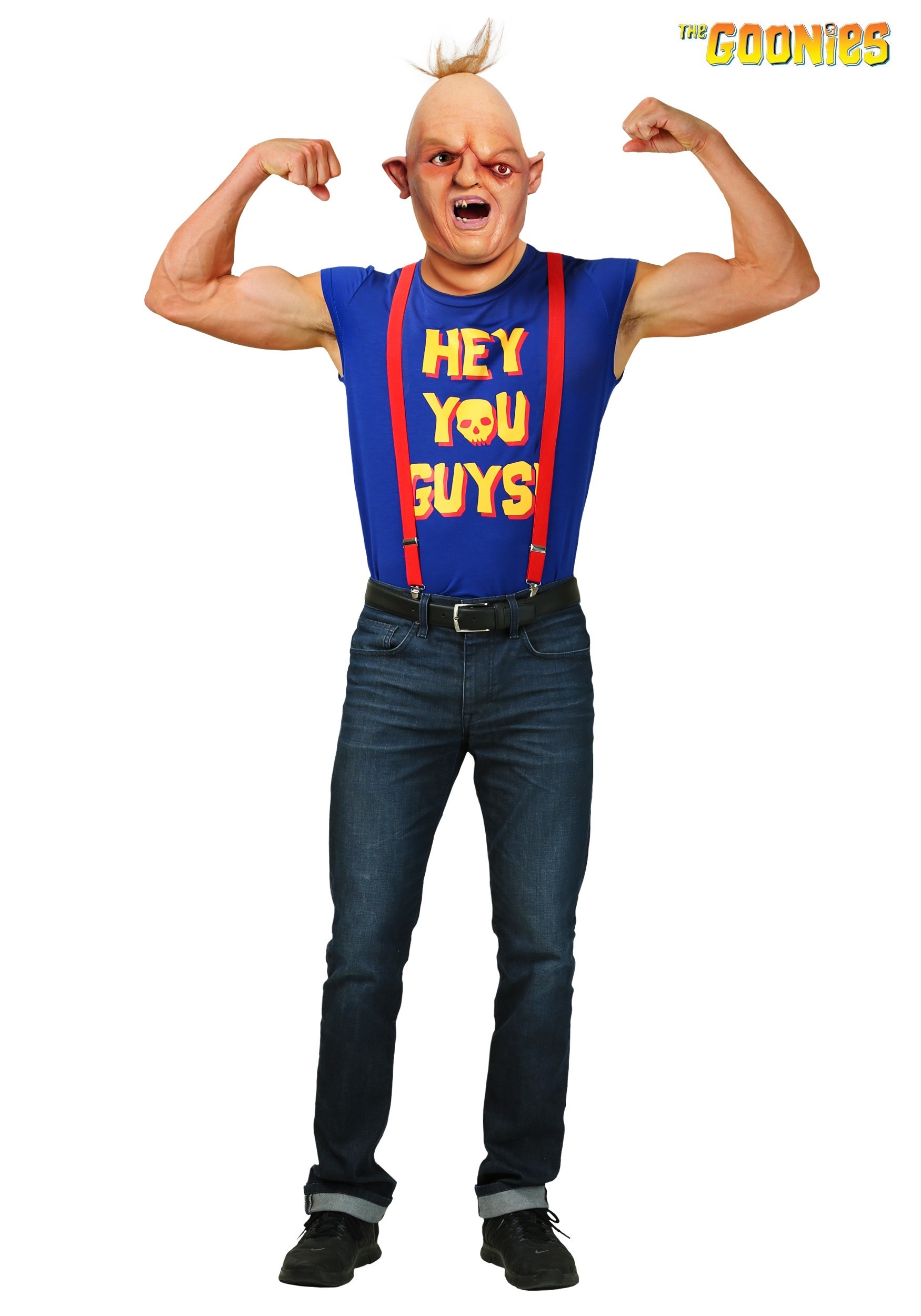 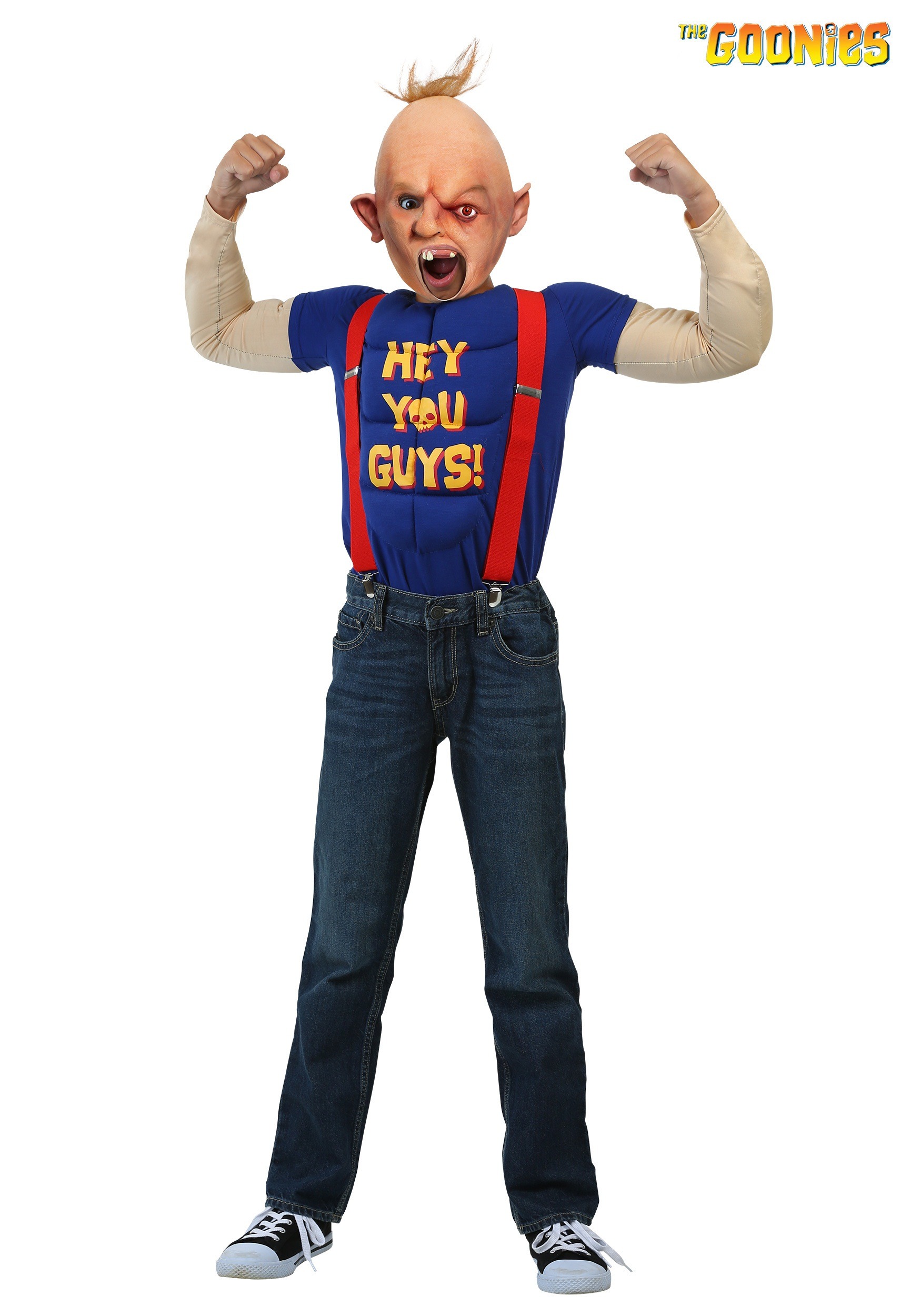 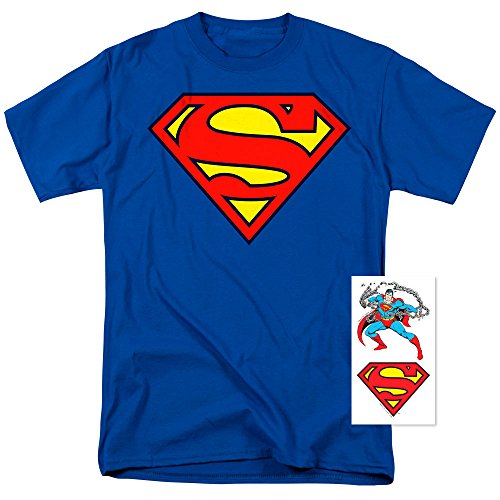 Drinking may prove tricky while this mask is on but you could try using a straw. This particular accessory could be fun for a party in the evening and especially if you wish to scare people away.

UK Readers get a Superman T-shirt from Amazon.co.uk

The most iconic outfit that this character wore was the blue logo Superman t-shirt. It was a darker shade of blue than this but many people choose this color which is pretty easy to get hold of.

Sloth was known for his rather superhuman strength and it is his favorite DC character so this is a great look to go for.

☠️ Sloth wore this classic Superman t-shirt in the pirate ship, Inferno, scenes where he has to fight against his Fratelli brothers Francis and Jake. Why not roll up the sleeves on the t-shirt or rip them to show off your own superhuman muscles or buy a superman tank top version.

You could just wear the t-shirt and mask and you'd capture the look of this character immediately. If you want to go a step further, he wore this with some bright red braces that were attached to his pants.

This character also wore a striped head scarf tied around the top of his forehead and a pirate hat which I will show below. It's such a fun look to wear to any Halloween or fancy dress party. 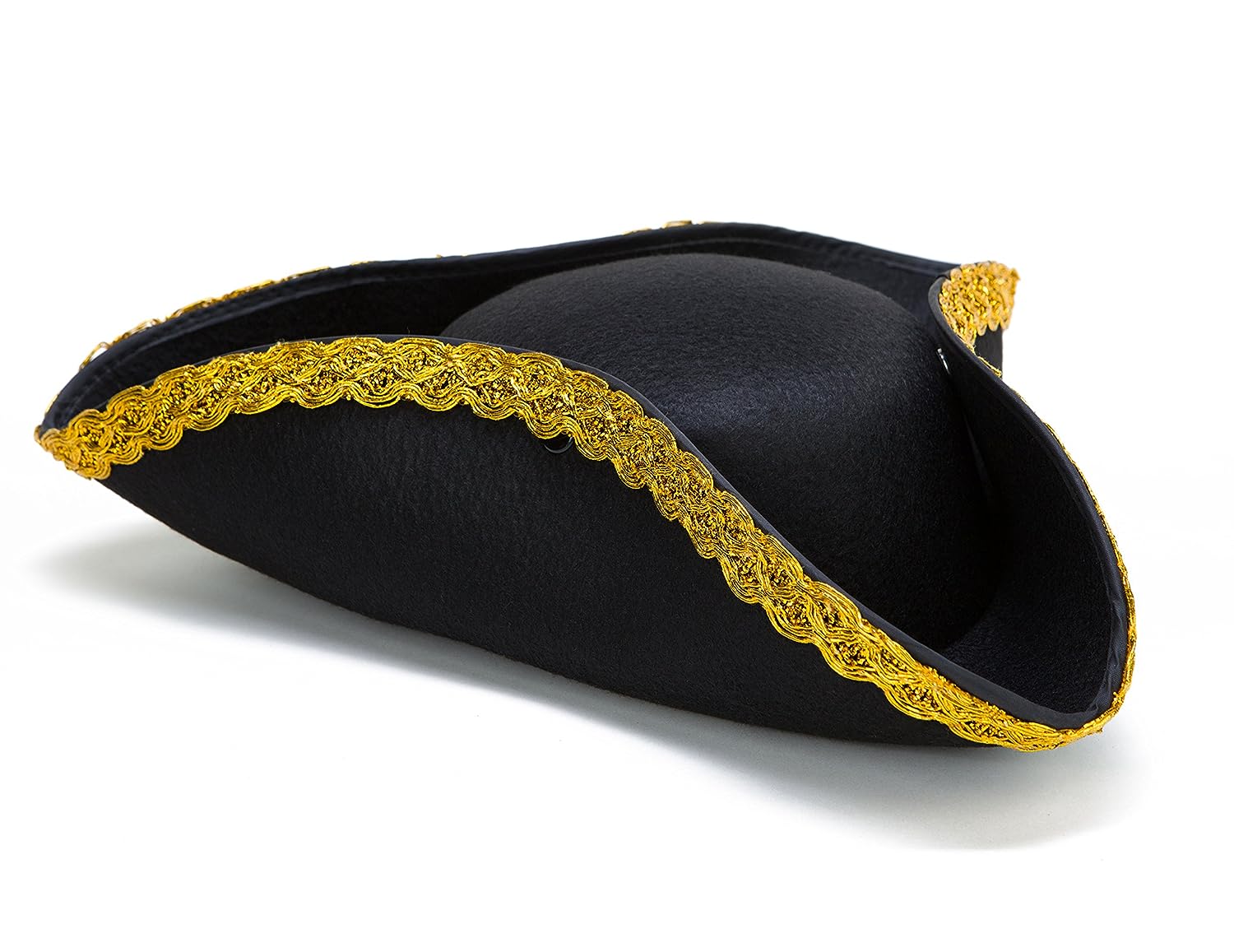 UK Readers get a Tricorn Hat from Amazon.co.uk

If you're going for Sloth's Superman Costume look, you may also want to add on a suitable hat to look like the one he wore at the pirate ship inferno. This black felt tricorn style hat is a great looking match and comes with a gold color trim.

What You Need to Pull Off Sloth's Superman Costume 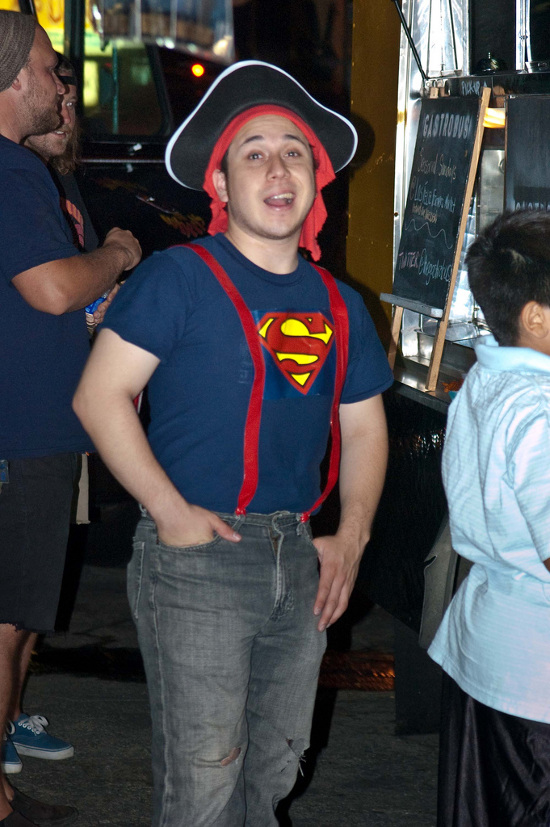 A Sloth character mask would have made this outfit just perfect. He doesn't have the required ugly face to pull this off successfully. But certainly it's a really cool look.

Image Credit: Shared by Erwin Recinos on Flickr with a CC License

Other Ideas for a Sloth Goonies Fancy Dress 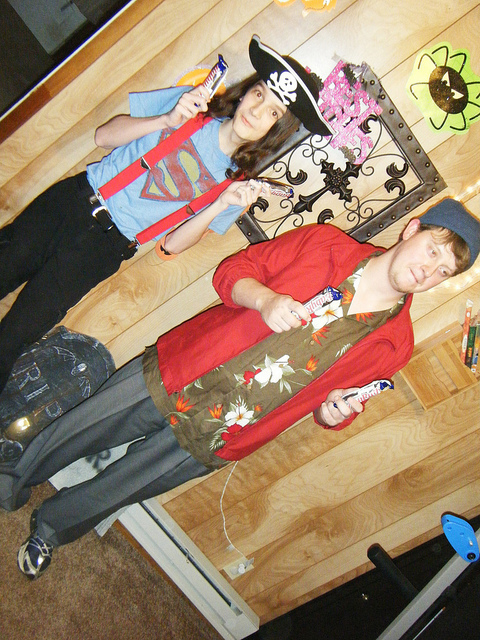 Image Credit: Shared by Holly Williams on Flickr with a CC License

We first see this character in the film as a rather terrifying and hideous monster who is imprisoned and tied up in chains. Later on Chunk, we called him the fat boy when we were young which is not at all politically correct I know, throws him a Baby Ruth chocolate bar and manages to hit Sloth on the head.

The chocolate throwing scene is one of the best bits of the Goonies movie. You can see the look of surprise of Sloth and also feel Chunk's absolute fear that this savage monster will react badly.

Sloth is chained to the wall in front of a TV. He goes wild when he sees the Baby Ruth chocolate bar that Chunk has thrown and is so desperate to eat it that he breaks his chains to get at it.

You could rock a cool look for this superhuman strength character by getting some plastic chains or shackles to wear as part of the chained Sloth look.

Scary Masks for Adults to Wear