Stuck for some really cool ideas on what you can wear for an eighties party or for Halloween? Here's my top ten favorite 1980s TV characters fancy dress costume ideas to get you started.

There are loads of great television shows from this decade that you can glean inspiration from. Having recently been to a birthday celebration with this costume theme, I've already seen some fantastic outfits first hand.

As a bit of a geek, I particularly like the Doctor Who idea to run with and there were 4 different Doctors on the BBC channel during this decade. But we also had many other shows that made fantastic entertainment; remember the A-Team. What about Miami Vice too with the smooth Don Johnson. These made great viewing of an evening. 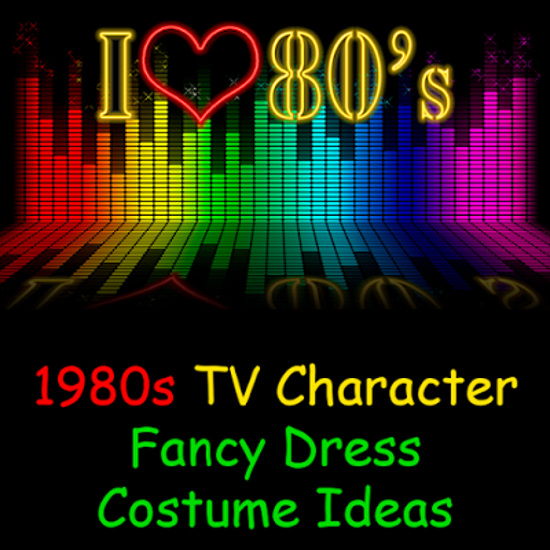 Image Credit: Original image shared by Osckar on Pixabay with a CC License

1: Get a Timeless Time Lord Style with a Doctor Who Fancy Dress Costume

Doctor Who was massive, especially from the start to middle of this time frame, and compulsive viewing for so many families. There was a change of 4 different Doctors during the 1980s. 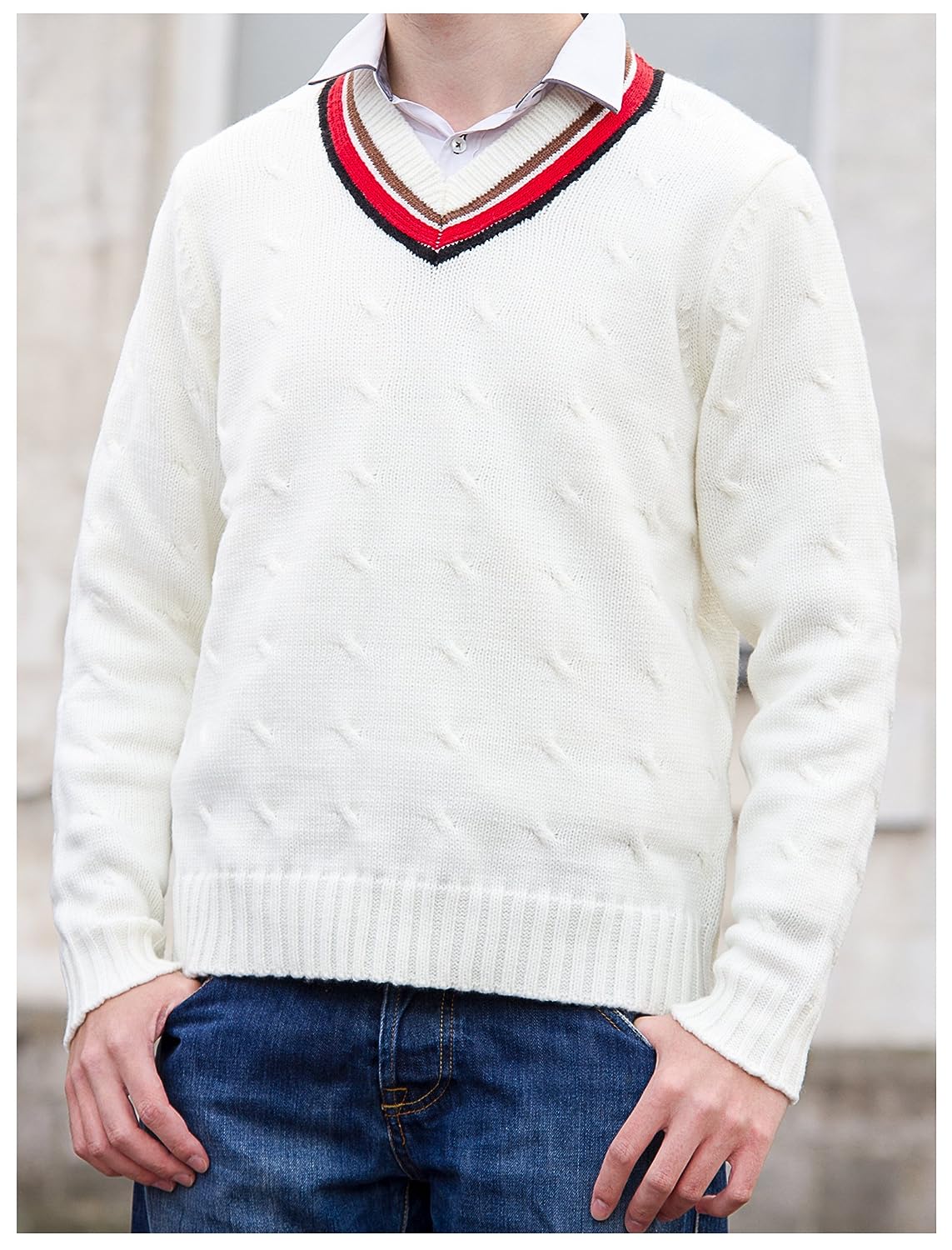 Get this 5th Doctor Who, Peter Davison, Jumper Sweater from Amazon.com

UK Readers get a 5th Doctor Jumper from Amazon.co.uk

Although he is arguably the most popular Doctor, Tom Baker is far better associated with the 70s so is not the best fit for this particular occasion. If you're running with this theme, I'd suggest either going with the 7th Dr, who is played by the fantastic Sylvester McCoy, or the 5th and much loved Dr, by Peter Davison, whose iconic cricket sweater is shown above.

Peter Davison's character wore a quintessentially English costume with a cricket inspired outfit. It is highly recognizable as a style and he was also an incredibly popular Doctor at the time.

This look is so true to the eighties. Don't forget to add a piece of celery to your outfit which he wore on the left side of his coat. The celery apparently had some useful properties to it. In any case, adding it will mark you out as a true Whovian geek! 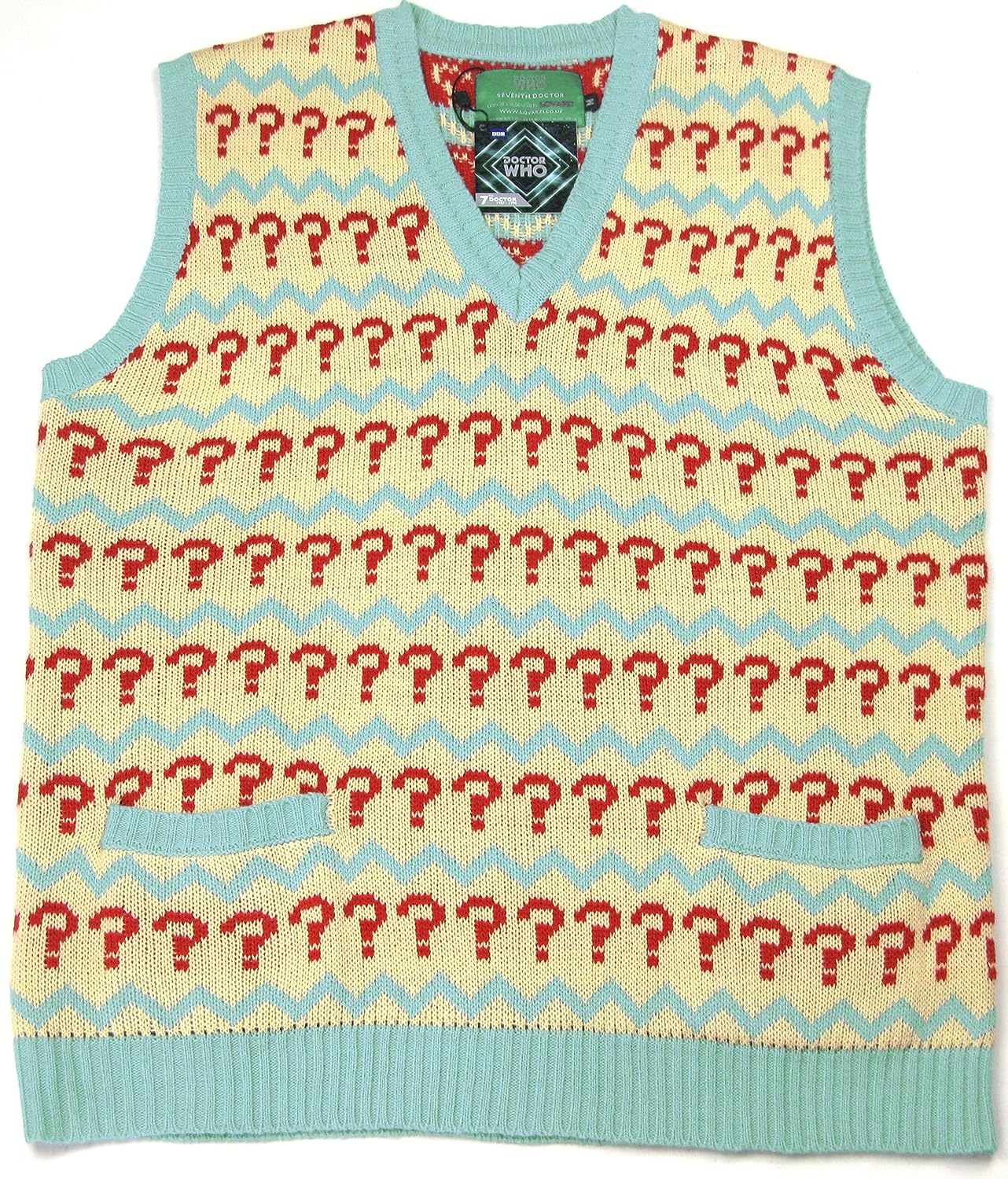 UK Readers get a 7th Dr Costume from Amazon.co.uk

Along with this fantastic looking tank top jumper, you can also buy official BBC versions of his paisley silk scarf and his umbrella. You can pull off most of the look of this particular Doctor with a top like this along with a suit and a cream color panama style hat.

2: There is No Plan B, FOOL: Join the A-Team with Mr B.A. "Bad Attitude" Baracus 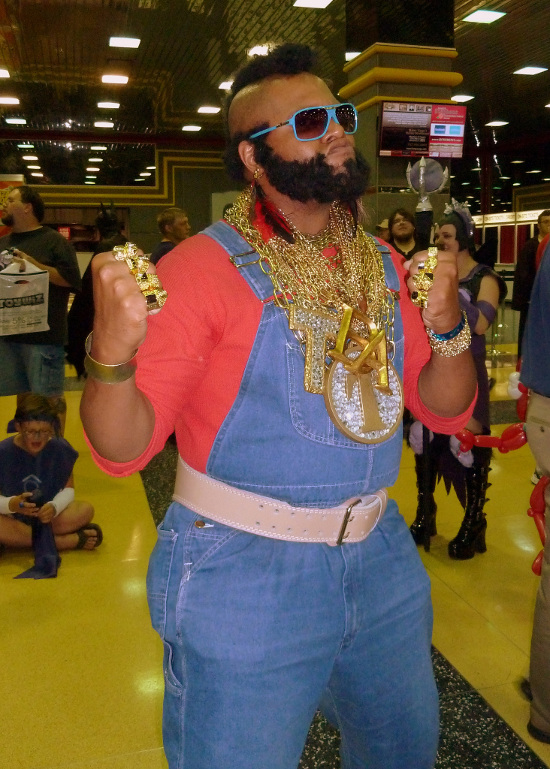 If you have a problem, if no one else can help, and if you can find them, maybe you can hire ... the A-Team.

Image Credit: Shared by GabboT on Flickr with a CC License

This television series ran through much of the eighties from 1983 - 1987 and was one of the most exciting and entertaining program's to hit our TV screens. Four members of a former commando unit: Hannibal, Face, Murdock and B.A. Baracus AKA Mr. T.

This show was fast-paced and action packed, so no wonder we sat glued to watch it. It had explosions, car chases, helicopters, good guys, bad guys and violence. The violence was purely of the family friendly sort however and nothing graphic. So it was spectacular viewing for families.

The easiest character to dress as, that other people would instantly get, is of course Mr. T. This brilliant "bad attitude" guy loved saying the word "fool" and used it in some of his best known quotes from the A-Team including "I ain't gettin' on no plane, fool," as well as "pity the fool" and "you crazy fool!" His larger than life character achieved a cult status all on its own.

How to Dress as Mr T or B.A. from the A-Team

His character suffered hugely from a fear of flying, hence why he did not want to get in an airplane or helicopter. That may have been yet another reason why he clashed so much with Murdock who loved flying planes.

Yet despite their clashes, they were firm friends in the series. He was a skilled hand-to-hand combat fighter and a great mechanic. And his character loved to wear lots of bright gold bling - so you can really ham that one up when dressing up as him.

3: Be Powerful like J. R. and Glam like Alexis by Dressing as a Dallas or Dynasty Soap Opera Star

The 80s were the era of the American soap operas on British TV and didn't we just lap them right up. Dallas was all about the Ewing family with J. R. and Bobby. Bobby was famed for his shower scene which allowed his character to amazingly come back to life after being killed off because the whole year before had just been a dream! Oh what fun. 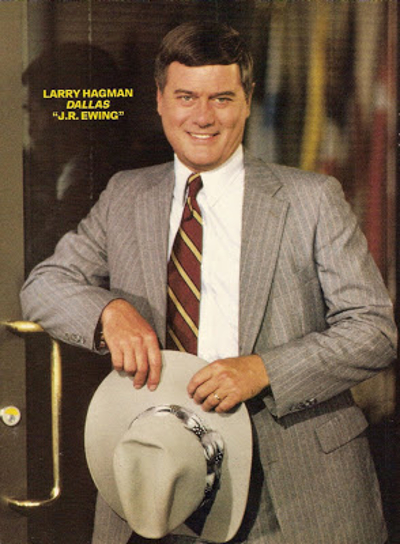 Image Credit: Shared by Jean Pierre Gallot on Flickr with a CC License

J. R. would be the obvious choice to dress up as in costume. This oil tycoon liked to wear a big cowboy hat with suits. His biggest story line was the "Who Shot J. R." one which was a conundrum since practically none of the other characters in the show really liked him. He cheated on his show wife Sue Ellen and his scheming made him numerous enemies.

J.R. is a really easy character for men to dress up as. You just need a smart suit and a cowboy hat to take on this larger than life character. Some extra white and straight teeth would work well too.

Dynasty was about the very rich and glamorous family, the Carringtons. Blake Carrington had a new and rather angelic wife, Krystle, and then a scheming ex-wife Alexis to contend with.

Joan Collins who played Alexis stole the show as a manipulative and clever socialite who was determined to cause trouble for Blake who she hated with a passion.

Alexis is the best known character of the show and would make a fantastic choice for a woman's 80s fancy dress outfit. You might need to find a big shouldered and expensive looking power suit to wear and some smoldering red lipstick.

4: The Dukes of Hazzard: Wear Your Daisy Dukes! 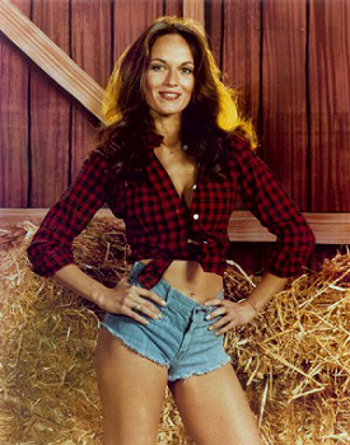 By Source, Fair use, Link

Bo and Luke Duke live on a farm in Georgia along with their cousin Daisy and Uncle Jesse. This TV series was exciting for the adventures that Bo and Luke got up to racing around in their Dodge car and foiling the schemes of the corrupt Boss Hogg, the country commissioner. I loved all the car chases and stunts.

It was always exciting action to watch. Daisy Duke makes a fab idea for a women's fancy dress. Daisy loved to wear her very short "Daisy Dukes" denim jean shorts. These would be worn with heels and a tight fitting and skimpy little checked cowboy shirt top. You can certainly get a great idea of how to dress as Daisy with this photo of her in character above.

5: Be a Lady's Man with the Ultra Cool Fonzie, The Fonz from the Happy Days Sitcom 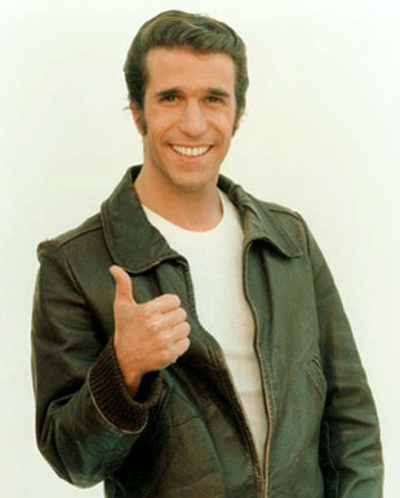 Image Credit: Shared by Richard Elzey on Flickr with a CC License

Arthur Herbert Fonzarelli aka Fonzie or the Fonz is the hugely popular character from Happy Days. This TV sitcom had such a catchy and happy theme tune to it which really captured the vibe of the whole show.

Men should note that The Fonz has been voted as one of the all-time greatest TV characters. This is a pretty easy look to rock. Wear denim jeans along with a plain white t-shirt a leather jacket and slicked back dark hair. His trademark was to do a thumbs up with his hands. Ay!

How to Rock The Fonz Look: 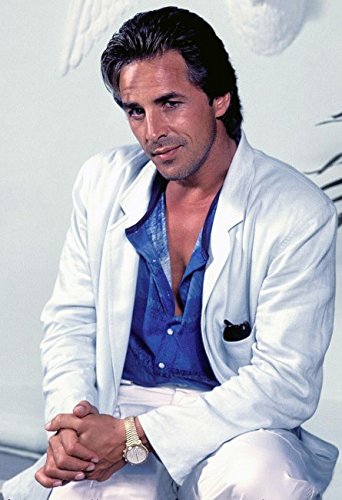 Detective Ricardo "Rico" Tubbs and James "Sonny" Crockett work undercover as part of the Miami police department. They are a very cool duo who work to bring down criminal enterprises. Don Johnson who plays Crockett and Philip Michael Thomas who plays Tubs were a heavy influence on male fashion in the 1980s.

Crockett and Tubs opted for a smart casual look with pale color suits. Crockett would often wear white suits along with plain t-shirts, no socks, white slip on shoes and black shades.

How to get the Miami Vice Look: 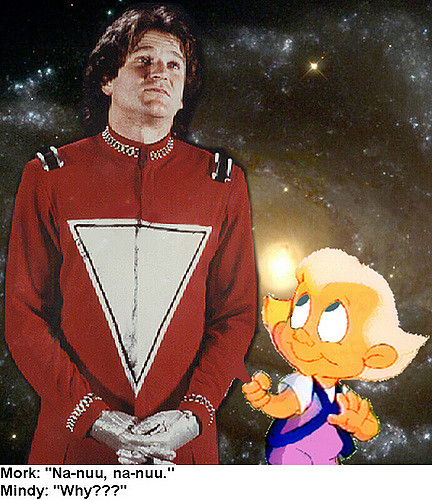 Image Credit: Shared by Generic Brand Productions on Flickr with a CC License

A strange alien, Mork from Ork played by Robin Williams, comes to Earth in an egg in order to study human beings. He meets the pretty normal human Mindy, who takes him in, and they have some wacky adventures together. Eventually their friendship blossoms and they end up getting married.

Mork does loads of odd voices and his catchphrase greeting is "Nanu, Nanu." This could be a fantastic 80s costume idea for couples. This whole series was actually a spin-off from an episode of Happy Days.

8: Dress as the Scheming Blackadder or the Dim Witted Servant "I have a cunning plan" Baldrick

The BBC Blackadder TV series started off in 1983 with The Black Adder. It is set in the Middle Ages where Edmund, known as the Black Adder, schemes to take the crown from his father King Richard IV and older brother.

The slimy and conniving Edmund is played brilliantly by Rowan Atkinson and there is great comedy between him and his poor servant Baldrick played by Tony Robinson. All four series of this show originally aired during the 1980s.

I saved the best until almost last. Only Fools and Horses is typically British and spanned most of this decade with 7 series. Derek "Del Boy" Trotter, played by David Jason, his young brother, Rodney and their elderly Granddad all live together in a council flat in Peckham, London. Del is a market trader with the gift of the gab while Rodney or Rodders, as Del calls him, is nice but a bit dim.

The show is filled with Dels get rich quick schemes that normally go wildly wrong. Other much loved minor characters include Trigger, played by Roger Lloyd-Pack, and the snobbish used car salesman called Boycie. Get the Del Boy look with a brown sheepskin coat, flat cap, gold necklace and rings and a lovely jubbly cigar. You can get Only Fools and Horses character masks to wear.

This comedy series was originally aired on our screens from 1980 to 1988. It centered around a holiday camp called Maplins. The entertainers are mostly has-beens or struggling actors and wear yellow coats. Our favorite character from this show was Peggy. She was a chalet maid, played by Su Pollard, who dreamed of getting rid of her mop to be a yellow coat. This show won a BAFTA in 1984.

Sloth from The Goonies Costume