The 1980s was a very exciting time to be growing up. Mainly this excitement was because it was the dawn of some super popular video games and also affordable home computers. It makes a great theme for 1980s video game costumes.

This page uses popular 1980s video games as the basis for some really cool looking Halloween and party costumes and fancy dress ideas. If you're a gamer, what could be better than dressing in an inspired outfit from one of these awesome retro suggestions.

I owned a number of the handheld electronic Game and Watch LCD games which were made by Nintendo. I also had a personal ZX Spectrum home computer which I worshiped. Friends of mine had Sega consoles and then there were a wealth of arcade machines to enjoy as well, normally along with a visit to the seaside. 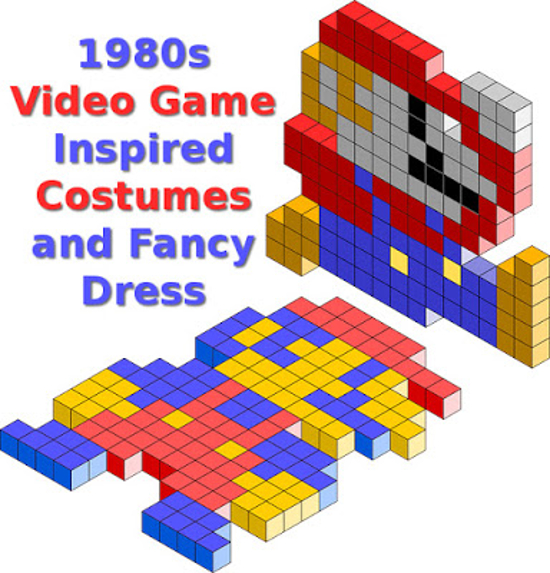 Image Credit: Original image shared by OpenClipart-Vectors on Pixabay with a CC License

1: The Legend of Zelda. Dress Up as Link or Princess Zelda from Hyrule

The Legend of Zelda is a fantasy video game series that I spent many happy hours on. It was first released in 1986 in Japan and then 1987 in Europe, so towards the end of this decade.

It still ranks as one of my all time favorites even though I'm no longer a gamer geek. If I was picking an outfit based on games, Link is probably the one that I would pick. 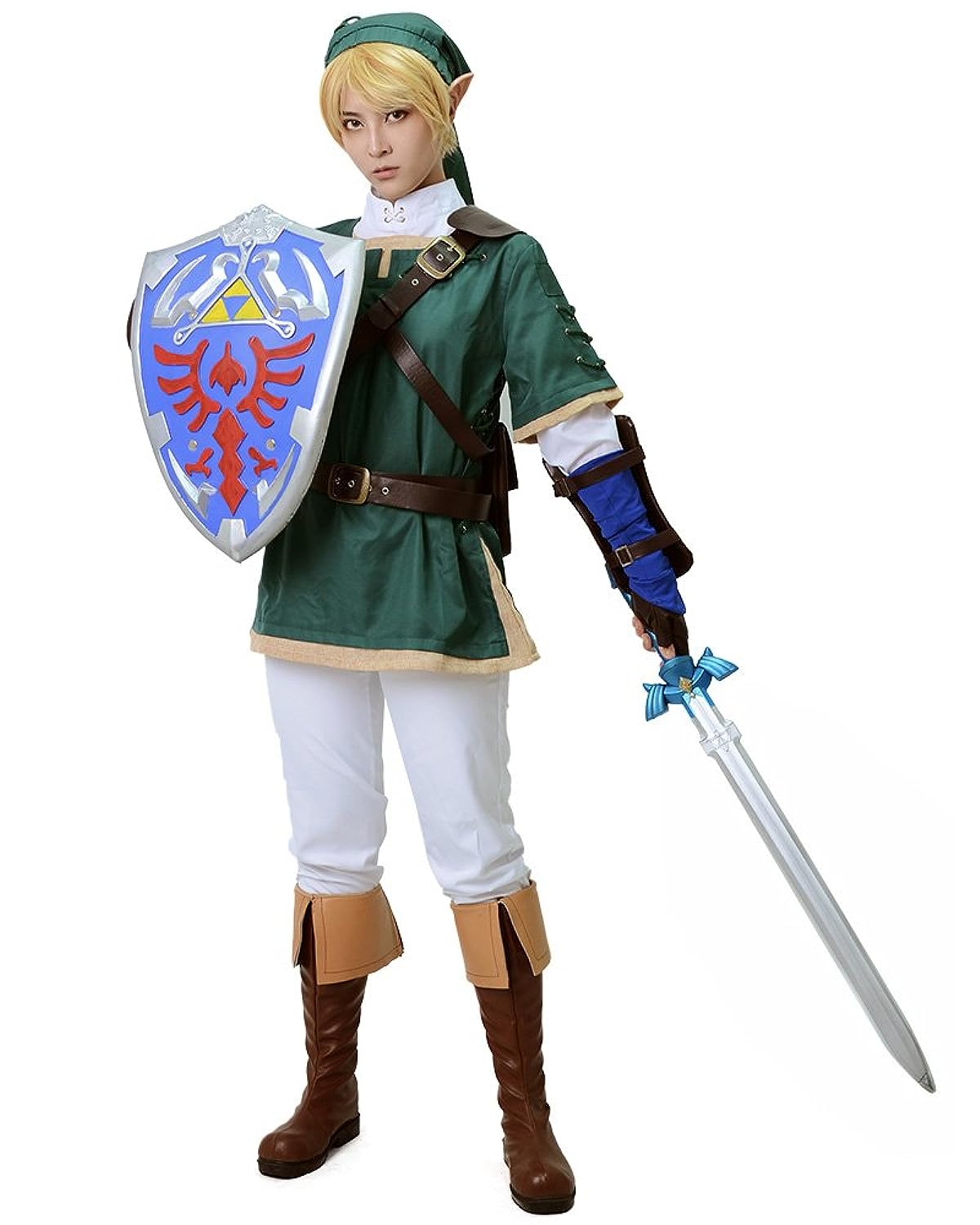 Get this Link Cosplay Costume, Sword and Shield not included, from Amazon.com

UK Readers get a Legend of Zelda Costume from Amazon.co.uk

Link is the main protagonist from the LOZ series and the most recognizable even to non-gamers. The green outfit here comes in a range of sizes for kids, men and women. You'll need to check the measurements and also what is contained in the set. If you intend to do a couple costume, you could dress up as Link and also Princess Zelda.

Every Link in the series is known for wearing a green tunic and a long, green cap. These are really the essential items to go for when getting into character.

In the games, he has used many items and weapons and one of the most obvious choices, apart from getting a Link sword costume accessory, is to get a boomerang or bow and arrows.

He normally carries a sword in one hand and shield in the other. If you're into making things, you could produce replicas from painted cardboard. Here's a great piece of artwork of Link on DeviantArt. 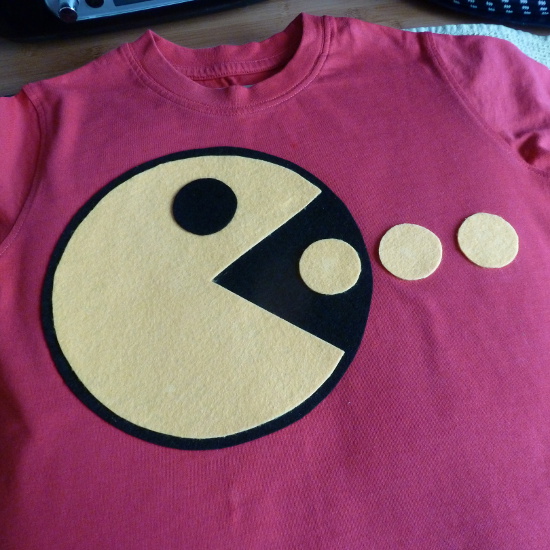 A Pac-Man t-shirt I made for an Eighties birthday fancy dress party.

When we went to a family member's 1980s theme birthday party, I made my daughter a simple but effective Pac-Man inspired t-shirt design.

My DIY design featured a yellow pac-man gobbling pac-dots on the front and a pink ghost, pinky, design on the back. I teamed this up for her over a pink dress with red strawberry fruit motifs and a matching bow for her hair.

This costume was easy to make because I used felt fabric to create the motifs and stuck them down using fabric glue. Mine was a no-sew costume but you could sew it as well pretty easily if you want a more permanent design.

If you would rather buy something, there are ready made Pac-Man fancy dress outfits available.

You can get both the main character and also the ghosts too. There are some fun looking ghost ponchos to wear which incorporate the large staring eyes into the front of the design. Pac-Man was released in 1980 and so is bang on theme.

Super Mario Bros, first released in 1985, was another gaming series I loved and played on the NES, Super NES, Game Boy and other console platforms. There are enough characters that this theme could be used for couple costumes or even group ones for parties, Halloween, cosplay and more.

There is Mario in red and blue, Luigi in green and blue, Princess Peach (originally Princess Toadstool) and Bowser as well as Yoshi and power-ups that include mushrooms, flowers and stars. All of these could make for fun costume choices. 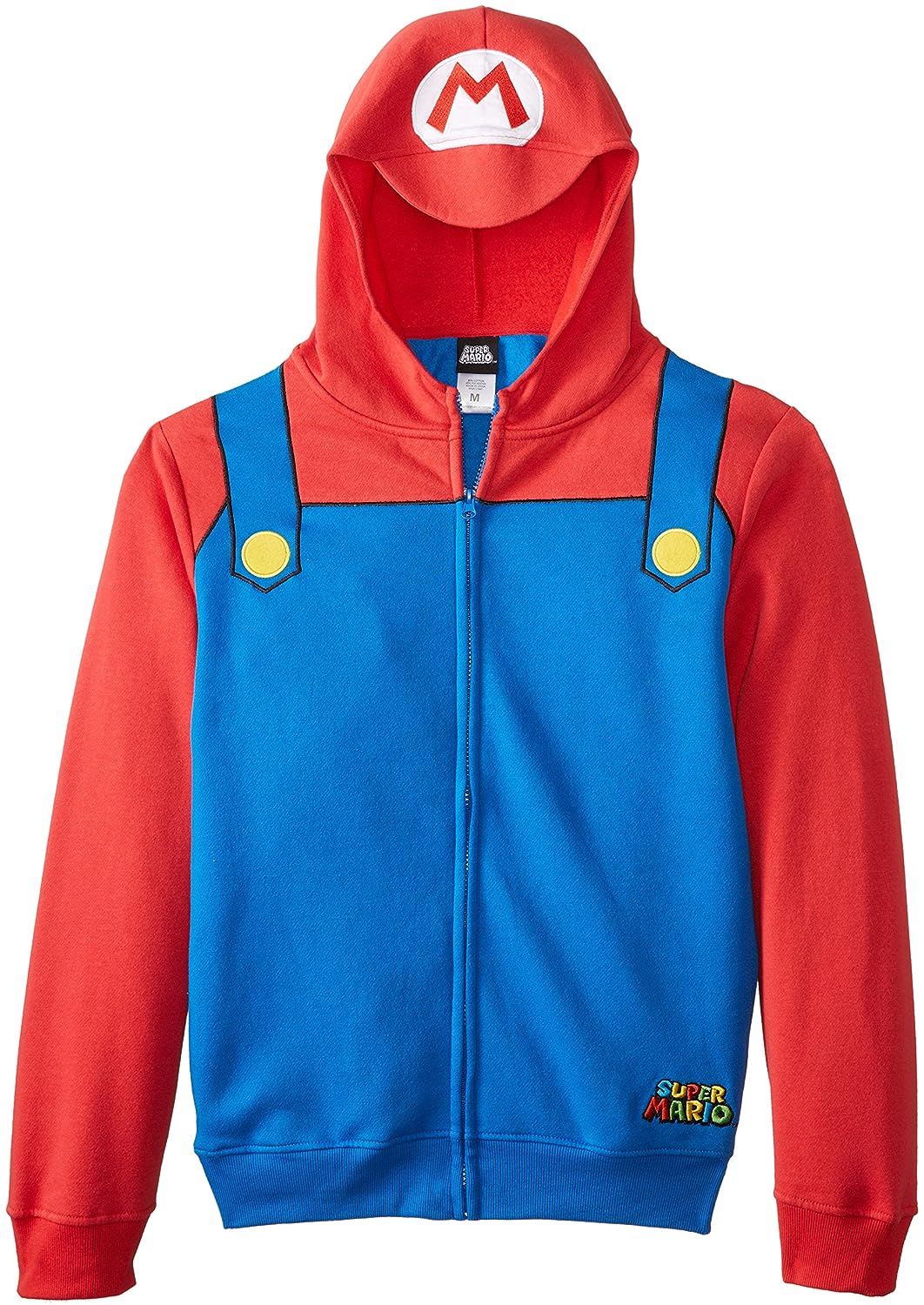 View this Super Mario Zip Up Costume Hoodie on Amazon.com

UK Readers get a Mario Costume from Amazon.co.uk

This costume hoodie design looks like the cheeky Mario brother with the red and blue color zip up hoodie along with the in-built red hat on the hood with an M monogram on it.

Luigi's costume is similar but uses green and blue colors instead. I love the idea of wearing a costume hoodie which makes for a really easy Halloween outfit as well as being something that you can wear at any time of year too.

Alternatively, you could purchase a flat cap yourself in the appropriate color for one of these brothers. Then wear a plain, long sleeve t-shirt with some overalls worn over the top.

So this is a design that you could also put together yourself fairly easily. Caps based on the Super Mario Bros can be bought as separate accessories and there are also some great looking Yoshi, Princess Peach and Bowser outfits to look out for as well.

4: One of the Best Selling Video Game Franchises Ever, Final Fantasy

Developed by Square Enix and first released in 1987, Final Fantasy is one of the best selling video gaming series ever. It has been released on multiple platforms.

Although this wouldn't be hugely associated with this particular decade because it was more heavily played in the next one, you can get away with it because it was originally brought out in the eighties. Besides, it is so very cool and edgy. 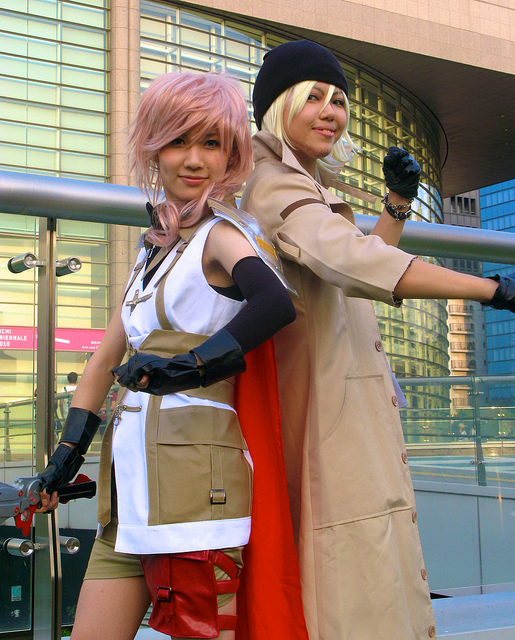 Image Credit: Shared by rumpleteaser on Flickr with a CC License

Final Fantasy is very popular with cosplayers in particular. There are so many characters and outfit designs to create a look. You could look over on eBay if you are interested in an outfit from this game.

There are lots of choices and they are often shipped from China and overseas. Make sure to check out sellers really carefully if you go with an auction venue to buy from. Or just use the images and photographs of the character outfits as inspiration for putting together your own.

I played Tetris and other copies of this block falling game relentlessly. This addictive tile matching puzzle was first released in 1984 and was quickly available to play on many different formats: home computers, arcade machines, handheld LCD systems and more. 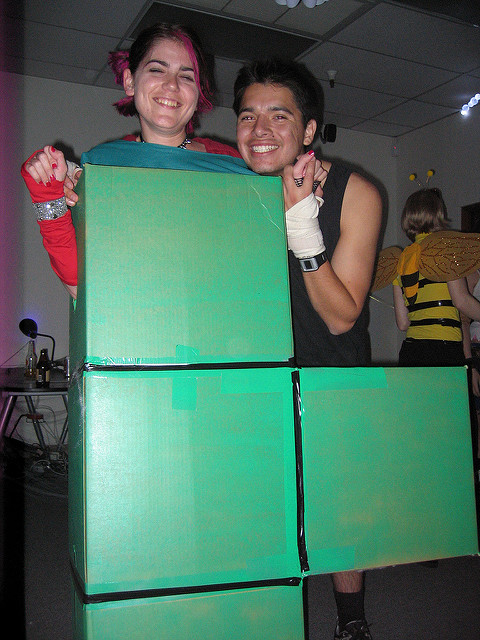 Image Credit: Shared by Becky Stern on Flickr with a CC License

This one is a green Tetris block theme costume. It is rather funny. You can also buy Tetris costumes in many block colors including purple, orange, blue and yellow.

If you don't fancy anything quite so obvious or in-your-face as this design, look out for some T-shirts that feature this retro game and even some rather wicked looking leggings for women. 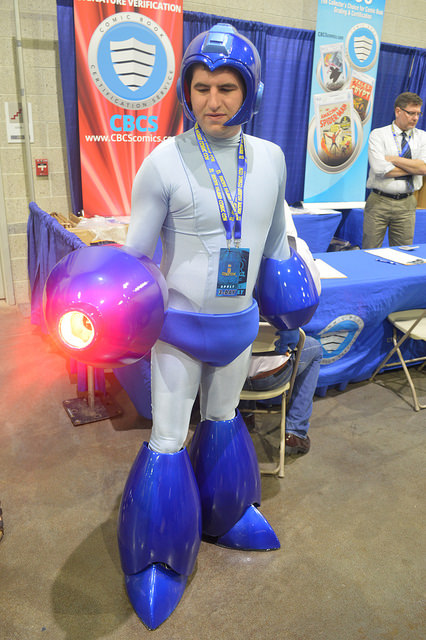 Image Credit: Shared by Matt Cloutier on Flickr with a CC License

Mega Man was first released in Japan back in 1987. It sees you control the Mega Man character through a number of levels all featuring a variety of obstacles and enemies to thwart before facing the big Robot Master boss right at the end.

There's also a comic series that started based on the game. You might struggle to find a pre-made costume to purchase although they are sometimes available on auction sites like eBay. But you could certainly have fun putting together your own.

7: Kick and Punch Your Way to Success with a Street Fighter Themed Costume

Street Fighter was another Capcom success and released first in 1987. The main character, Ryu, competes in a martial arts tournament which was originally played over 5 different countries and with 10 different opponents. You could play one or two player with the second player option being Ken Masters, the American rival of Ryu. 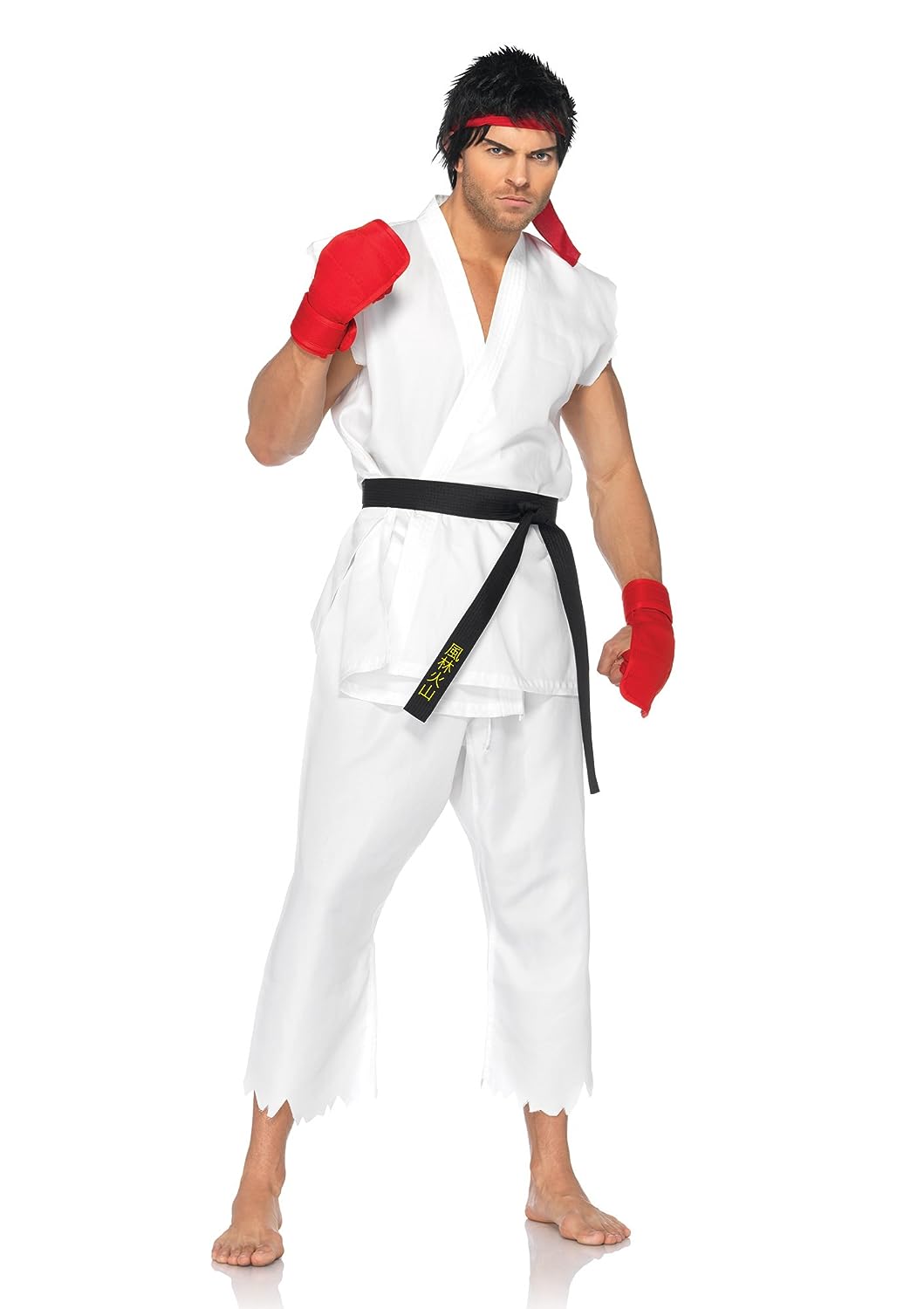 Get this Street Fighter Ryu Costume from Amazon.com

UK Readers get a Street Fighter Costume from Amazon.co.uk

Ryu is the main character from Street Fighter and luckily is not too hard to construct an outfit for. This is exactly the right look with white martial arts trousers, ragged and torn at the ends, and a white sleeveless top also ragged around the arm holes.

You need a black belt of course because you're an expert in Karate. And you also need red gloves and a long red sash tied around your forehead and the ends falling down at the back.

Bubble Bobble literally burst onto Arcade screens in 1986. These are two super cute twin brother dragons (one blue and one green named Bub and Bob or Bubby and Bobby.

The enemy in the game is called Baron Von Blubba (you really couldn't make this stuff up!) and he has kidnapped the brothers girlfriends. To get them back, you have to play through 100 levels, blowing bubbles to trap enemies and then bursting them. If you fancy dressing as one of these cute dragons, you should read more about this game over on Wiki.

9: Be a Space Explorer with Jetman from the Jetpac ZX Spectrum Game

Jetman is the cool looking little spaceman from the 1983 ZX Spectrum game called Jetpac. You control the character Jetman who tries to rebuild his rocket and then fill it up with fuel. All the while he is being attacked by aliens. This was a much loved game that many ZX Spectrum fans will remember.

To look like the character on the cover of the ZX Spectrum game, you need a rather plain white astronaut costume with medium blue boots (short welly boots could be a good option) and matching blue cuffs at the bottom of your sleeves.

White or silver space man gloves and a silver color rocket attached to your back can complete the look. This could be made from cardboard.

10: Easy and Inexpensive Idea for a Donkey Kong Costume 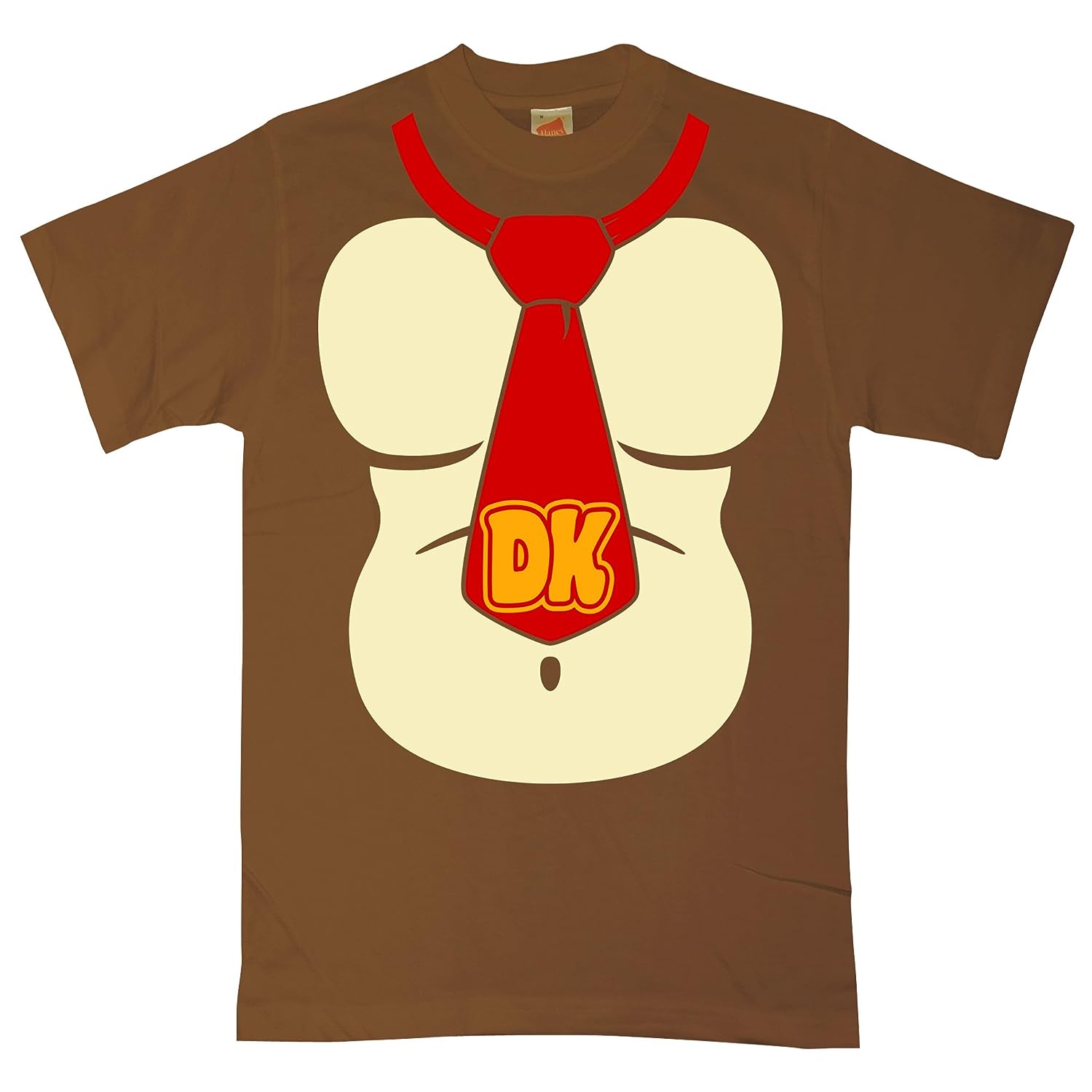 UK Readers get a Donkey Kong T-Shirt from Amazon.co.uk

Everyone should know Donkey Kong. This 1981 release was something I played on the handheld LCD Game and Watch. This is an easy character to dress up as for a party and especially if you just opt for a character t-shirt like this one.

Alternatively, you can dress yourself in brown, grab a gorilla mask and wear a bright red tie. Cut out the yellow letters DK in felt fabric and glue them to the bottom of the tie to look properly authentic for your occasion. Just for fun you could add a banana too.