Miss Havisham is the poor, jilted bride from the novel Great Expectations written by Charles Dickens. With a Miss Havisham costume, you want to emulate the sheer misery of a woman who had love cruelly ripped away from her on her wedding day.

The actress who played this character to perfection in the wonderful BBC series Dickensian was Tuppence Middleton. In this series she was given the first name, Amelia.

Poor Amelia becomes a reclusive spinster and never takes her wedding dress off again. She lives alone in her mansion Satis House until her lawyer Jaggers adopts a daughter for her called Estella.

Dress as a Dickensian Ghost Bride With a Miss Havisham Costume 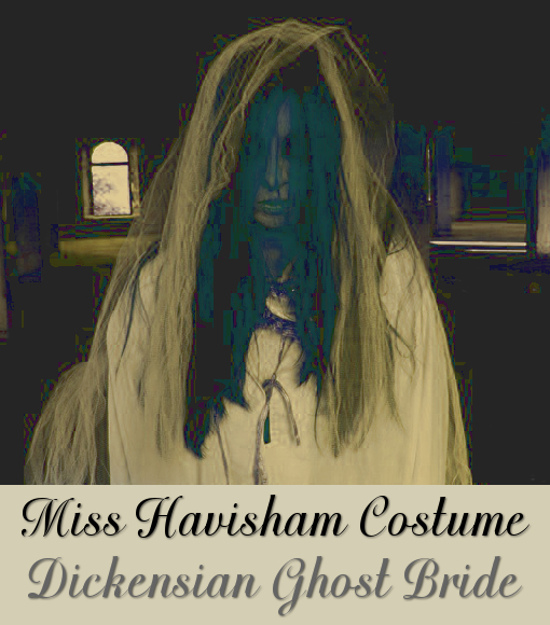 Image Credit: Original image shared by AdinaVoicu on Pixabay with a CC License

Miss Havisham is often depicted in films as being a very elderly spinster but Charles Dickens only imagined her as being in her fifties for Great Expectations.

⭐ There are not many actual Miss Havisham fancy dress costumes and outfits to be found. You can get plenty of outfits that are suitable if you search for a ghost bride costume as well as dead or corpse bride costumes. The dress you wear needs to look like it has been lived in for many years. 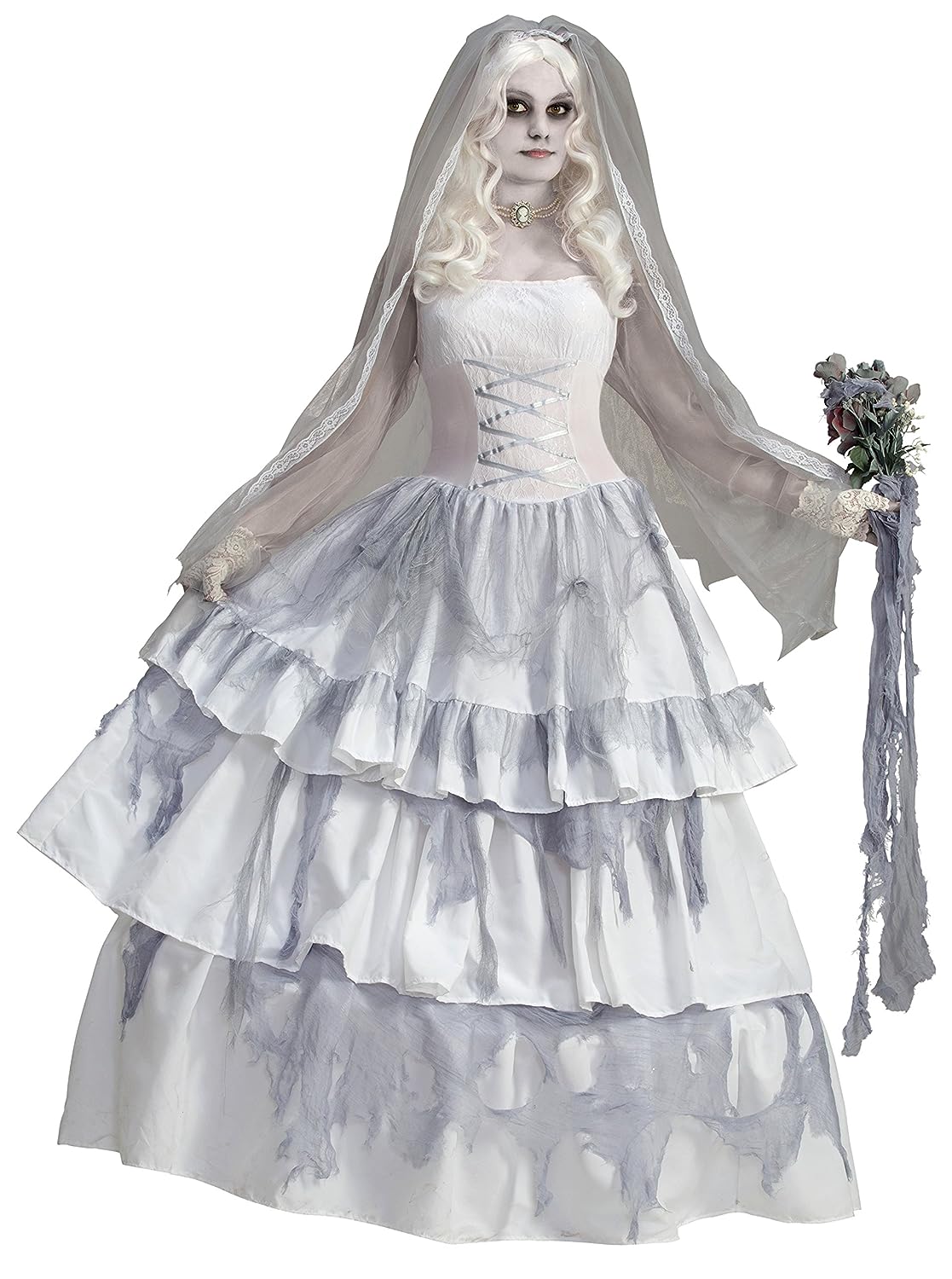 Get this Victorian Style Ghost Bride Costume from Amazon.com

UK Readers get a Ghost Bride Outfit from Amazon.co.uk

Tuppence Middleton plays the young version of this character in the BBC series Dickensian. She is given the first name, Amelia and is shown to be extremely beautiful. So you can be a beautiful but emotionally haunted jilted bride when you dress up as her.

In Dickensian we got to see an idea of Amelia Havisham's back story and how she was conned by her brother, Arthur, and the smooth talking Meriwether Compeyson who left her before she even got to the altar. 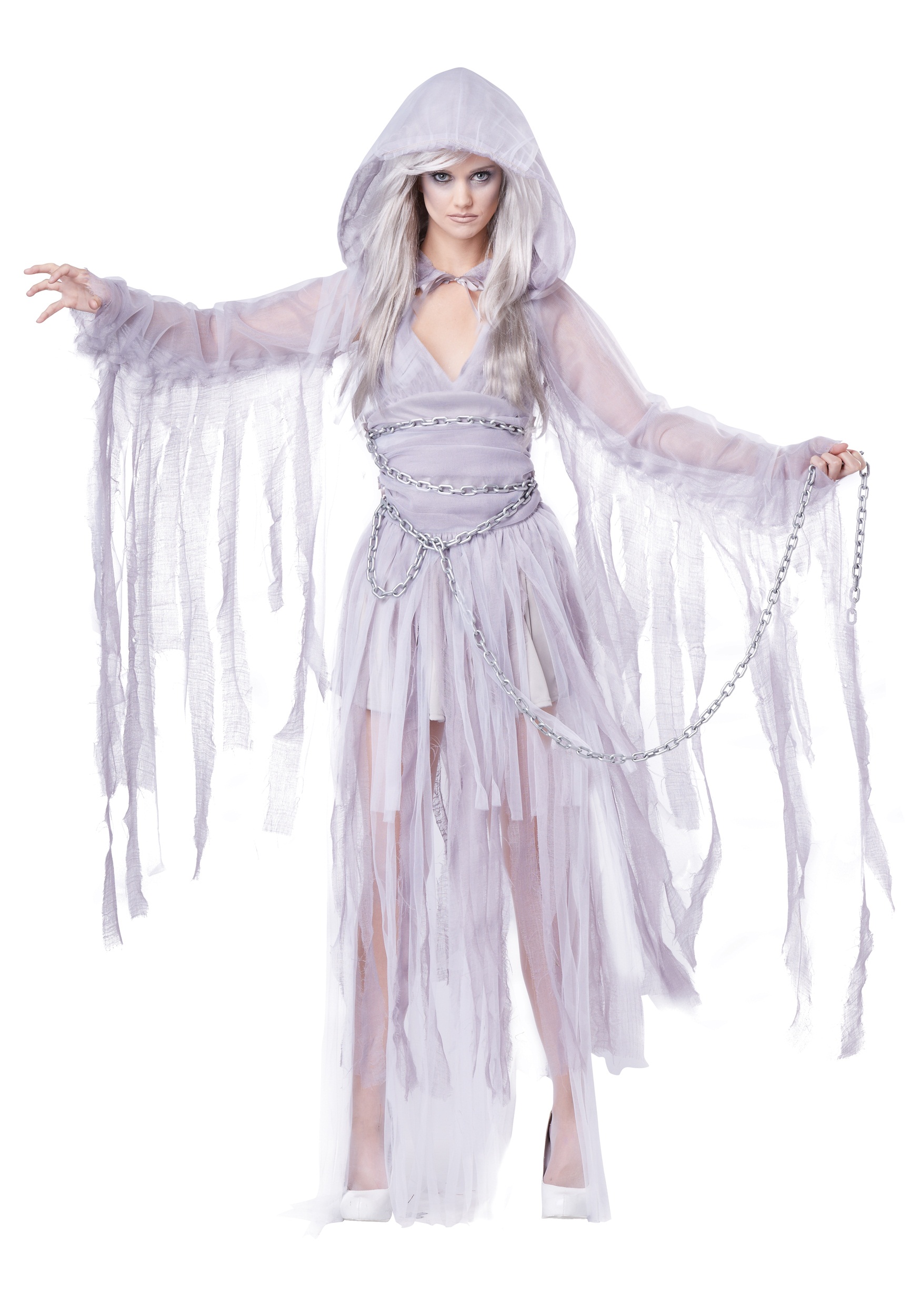 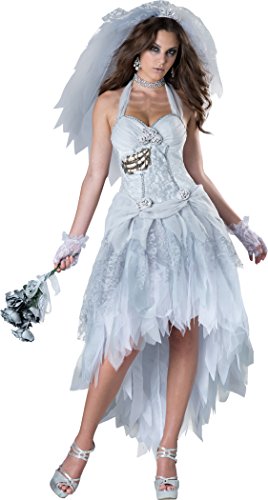 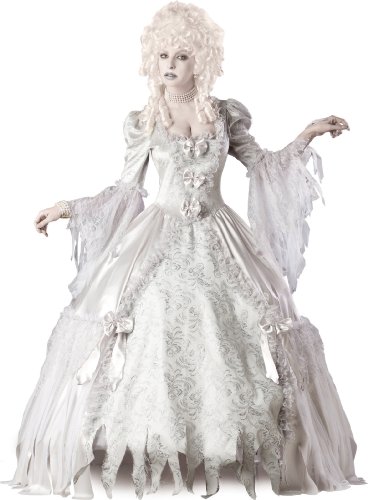 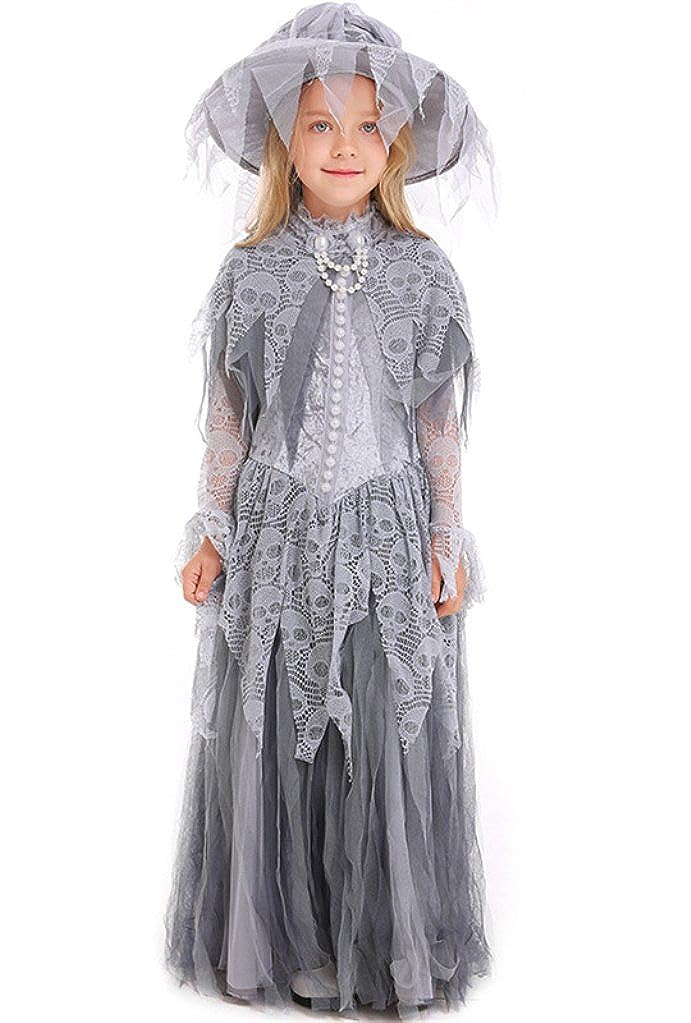 UK Readers get a Ghost Bride Outfit from Amazon.co.uk

Less suitable are Zombie themed ones because these often have pretend blood markings which are not particularly suitable for this character. A more traditional Victorian style dress works best with this character who was imagined by Charles Dickens. 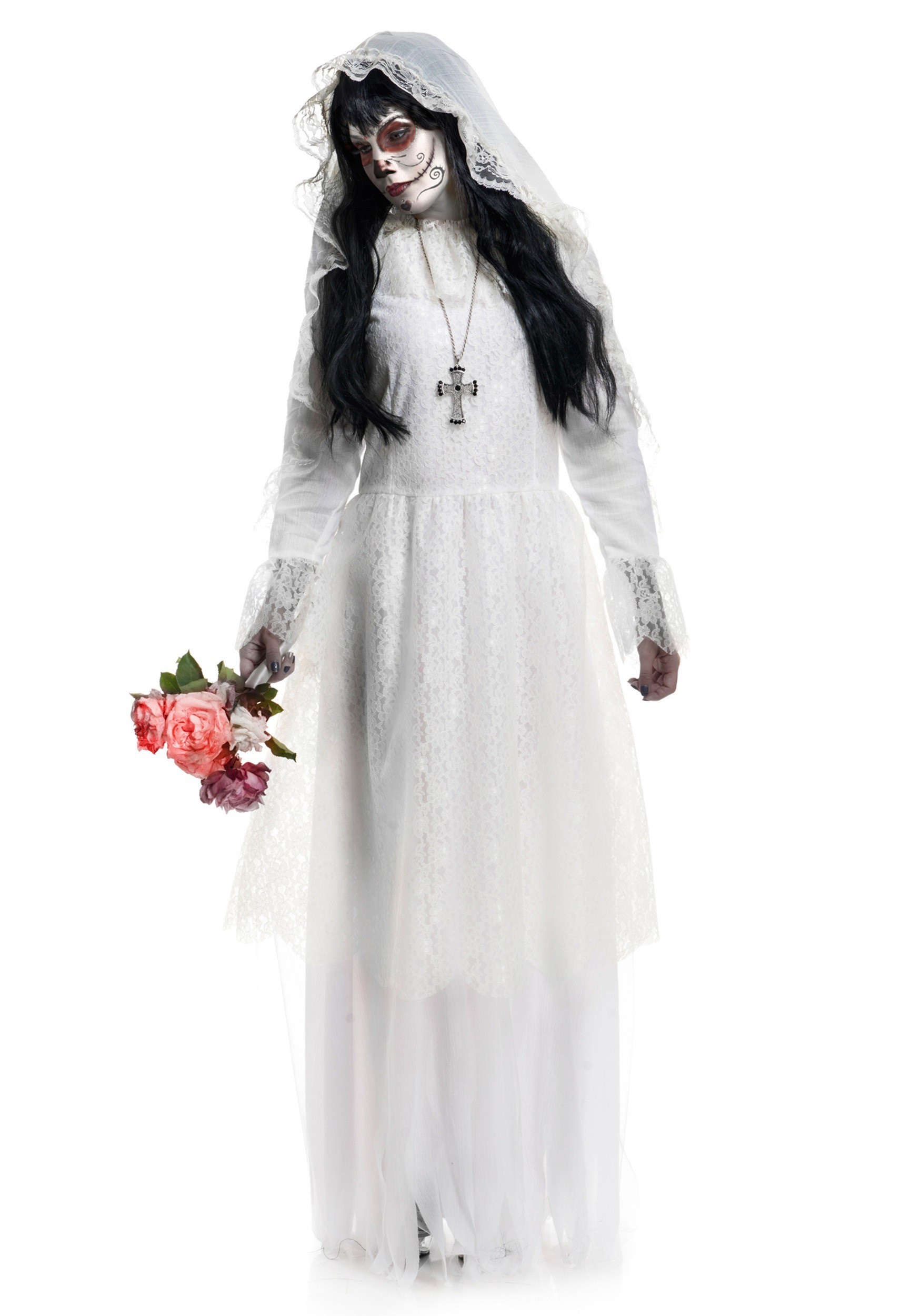 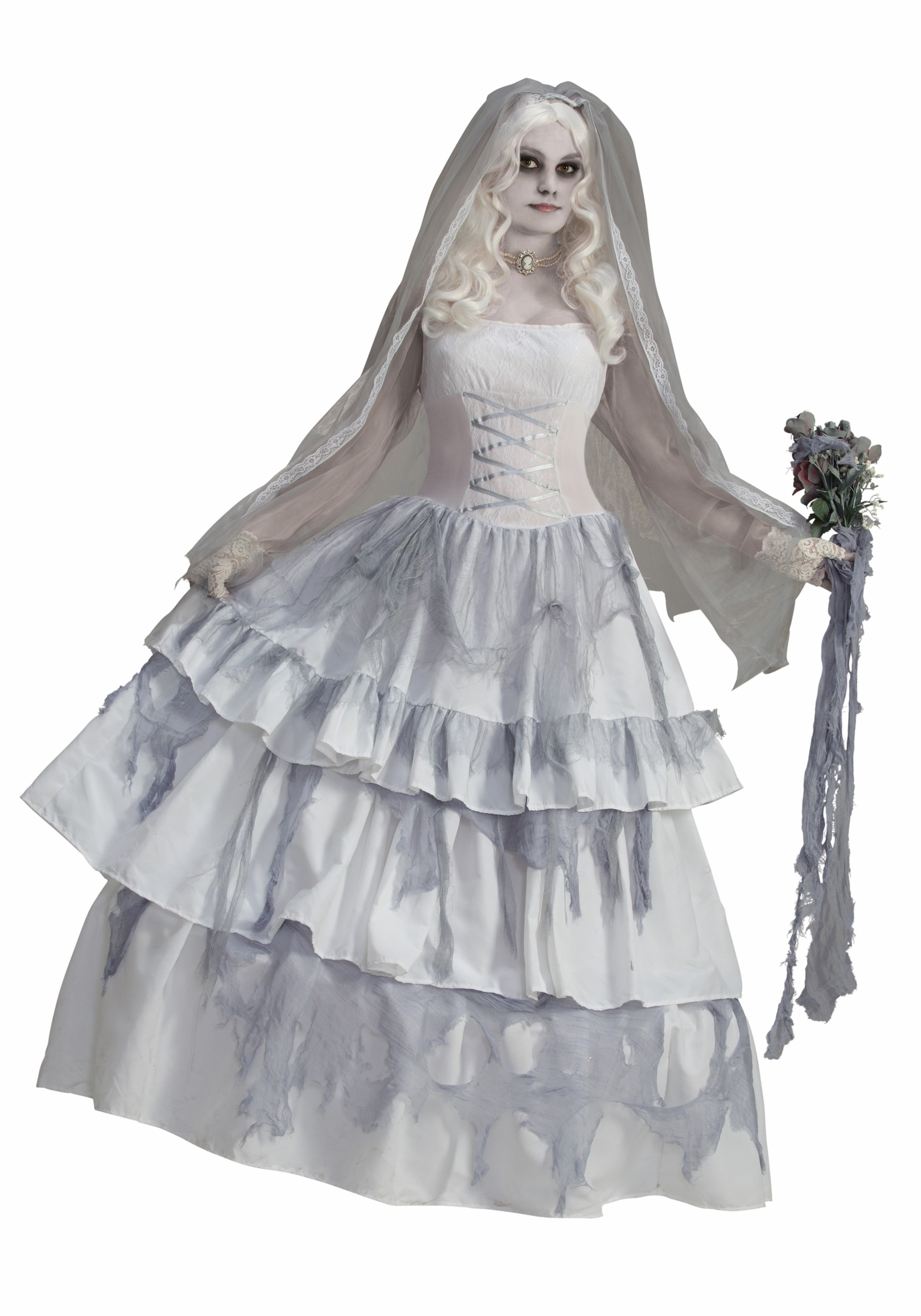 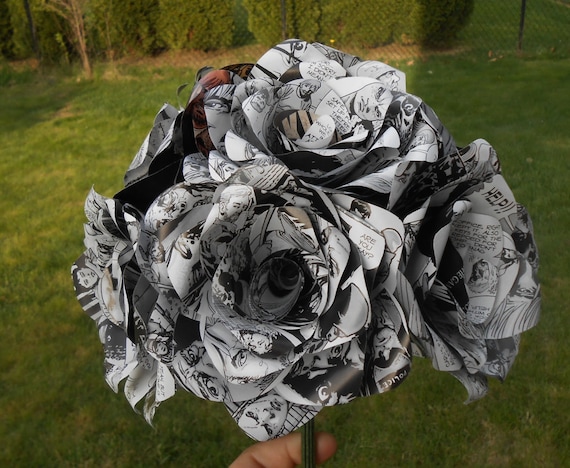 DIY dead corpse bride Halloween costume with a traditional white wedding dress and paper flowers which give it a unique look.

Image Credit: Shared by kelly on Flickr with a CC License

1: After being jilted by Meriwether Compeyson, Amelia shuts herself away in her family home, Satis House. Her skin becomes very pale and skeletal looking without any sunlight.

2: Life stopped for Miss Havisham at precisely 8:40, the exact moment that she was jilted, and it is one of the reasons that she is also referred to as a ghost bride.

She received a letter from Mr Compeyson on the day of the wedding saying that he would not be there. The exact time of reading this heartbreaking letter was at twenty minutes to nine. 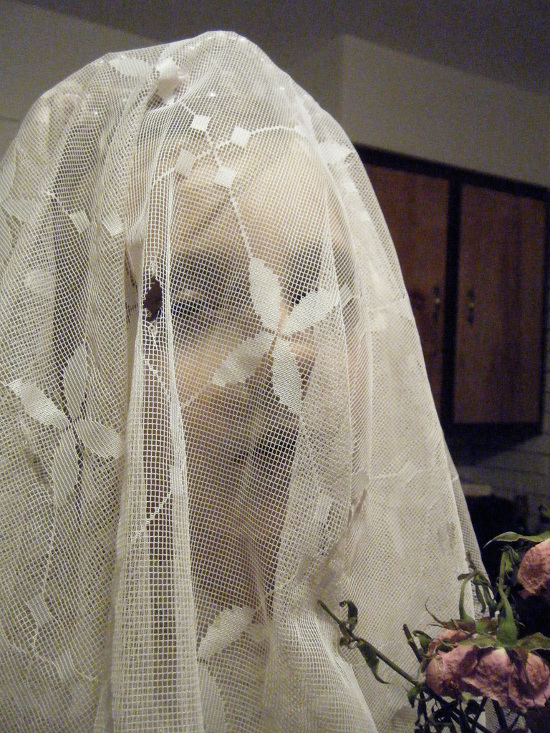 A white or gray lace wedding veil over your face immediately gives you a ghostly appearance. Add in some dead flowers in a bouquet as a costume accessory.

Image Credit: Shared by daniel.baker on Flickr with a CC License

Amelia had all the clocks in Satis House stopped and permanently set to reflect this time when her life, as she dreamed it, ended. You could have a prop of this letter to hold or even a clock incorporated into your outfit to show when time stood still.

3: She never removes her wedding dress after being stood up. So you can imagine how her original bright white dress becomes crumpled, grubby, tattered and torn over many years of not being taken off. 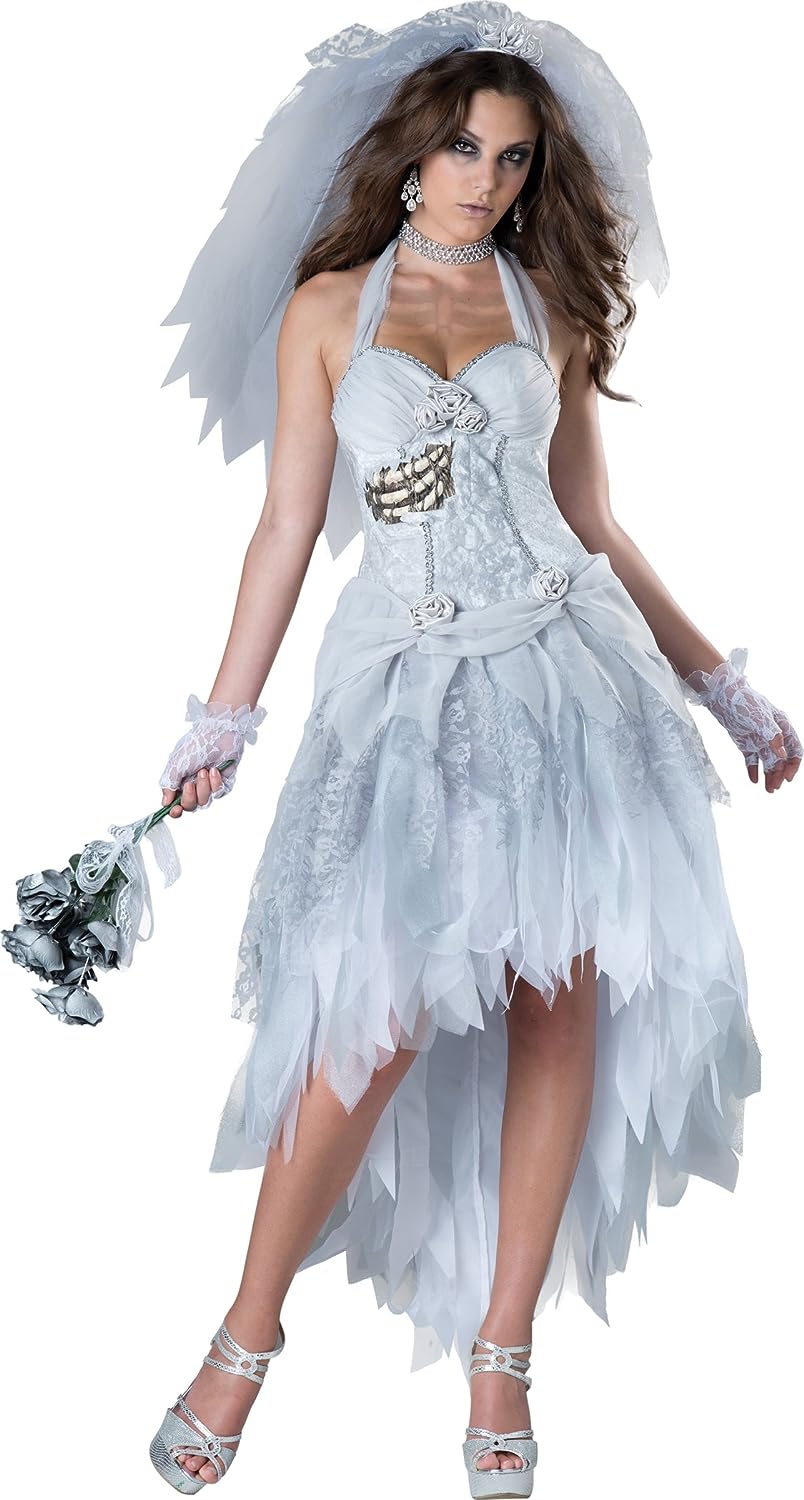 Get this Corpse Bride Costume from Amazon.com

UK Readers get a Corpse Bride Outfit from Amazon.co.uk

"I saw that everything within my view which ought to be white, had been white long ago, and had lost its luster, and was faded and yellow. I saw that the bride within the bridal dress had withered like the dress, and like the flowers, and had no brightness left but the brightness of her sunken eyes. I saw that the dress had been put upon the rounded figure of a young woman, and that the figure upon which it now hung loose, had shrunk to skin and bone." Pip from Great Expectations

4: Miss Havisham only wears one shoe. This is because she'd only put one on before she received her heartbreaking letter. In the Dickensian series, there is a problem with one of her shoes and she removes it just before Meriwether turns up to let her down. In either case, wearing just one white wedding shoe or clutching one in your hand is symbolic for things not being right. 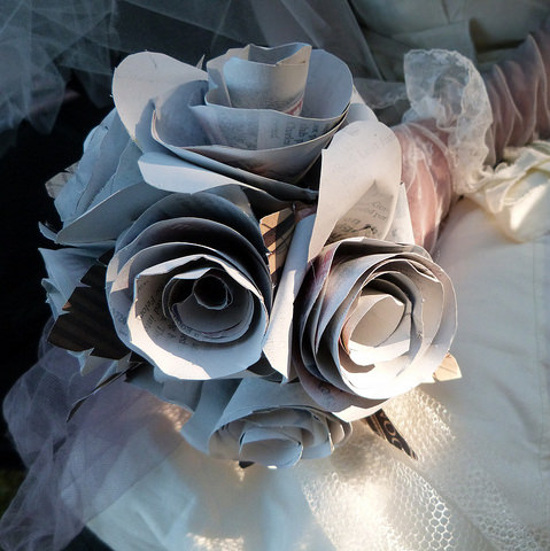 A bouquet of folded paper flowers are ideal for a ghost bride DIY fancy dress outfit.

Image Credit: Shared by kelly on Flickr with a CC License

5: The celebratory wedding breakfast and cake were left untouched as they were laid out on the table in Satis House. It is all left laid out for the wedding that never was. These are items that could be potential props for a more imaginative DIY costume design.

6: You can imagine that any floral bouquet this character had would look completely dead with flowers that had dried and discolored. You could use a fake flower arrangement and spray paint it black or in dark and decaying colors.

I like the idea of using newspaper to fold your own paper flowers into a bouquet as shown in the photo above. These look great. 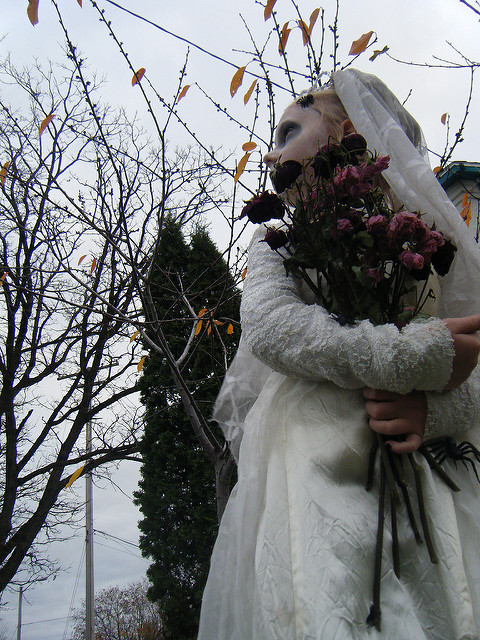 Image Credit: Shared by daniel.baker on Flickr with a CC License

Whatever online or offline shop you wish to buy your outfit from, look at any combinations of corpse, dead or ghost bride dresses and costumes because there are very few Miss Havisham options available.

If you ask for one, you may hit a blank look with some people not knowing this is actually a popular Charles Dickens character and even more so since Dickensian hit British television screens. 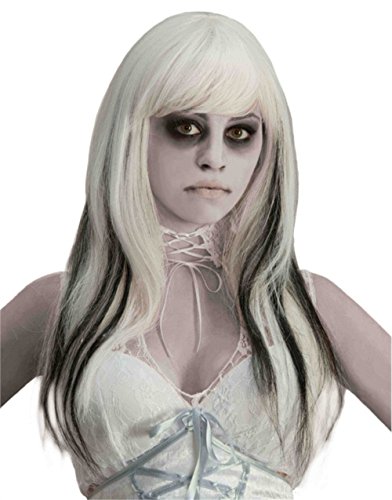 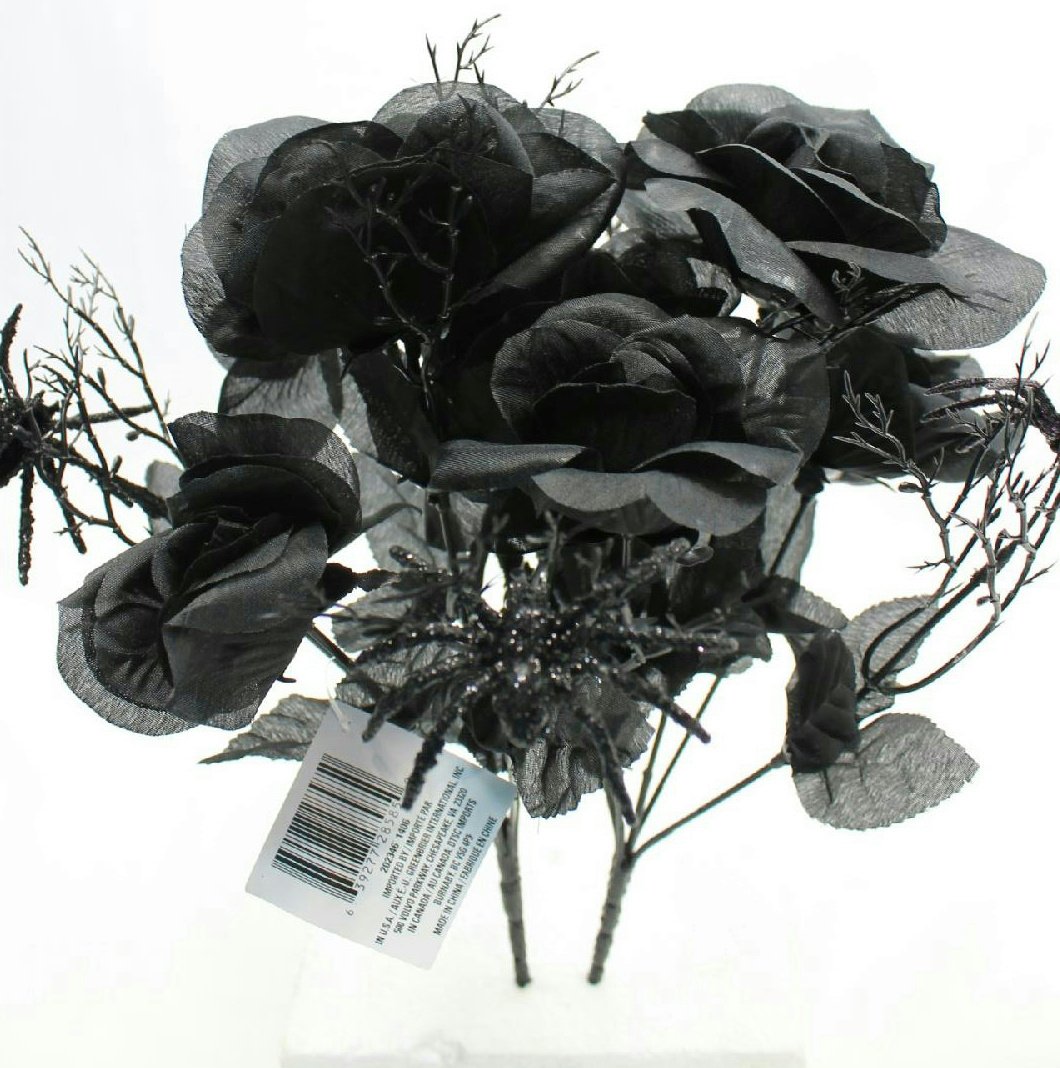 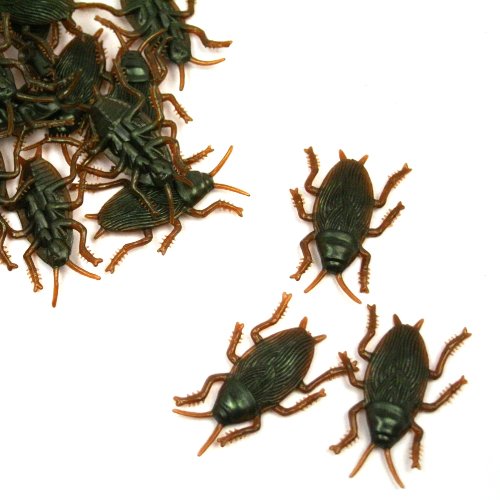 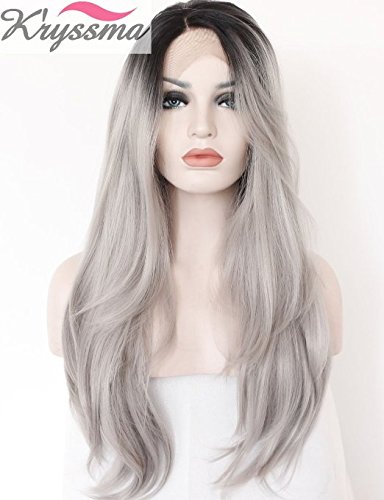 The outfit shown above includes a dress with petticoat and a veil. The dress is made to look tattered and torn and has some distinct layers in the skirt section. The flowers, gloves, jewelry and shoes are not included. Always read descriptions of Halloween costumes carefully before buying to make sure that you know what you are getting.

You can get all kinds of wigs that might look better than your own hair. White wigs can look good as well as gray ones for a Miss Havisham Halloween costume. 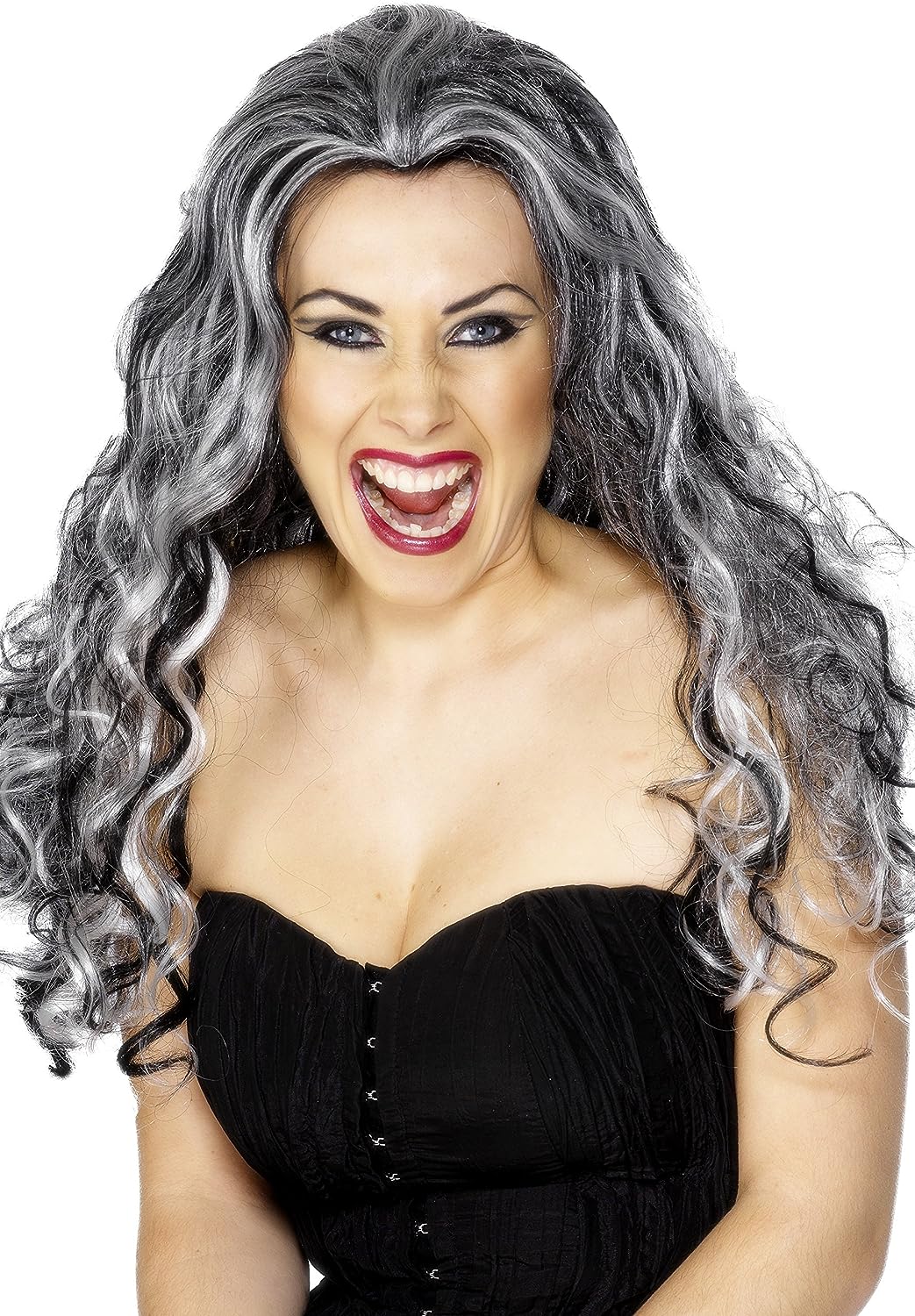 UK Readers get a Ghost Wig from Amazon.co.uk

You can get nice sleek, straight looking wigs but they look rather too modern for a character out of a Charles Dickens book so I prefer curly ones. Plus I feel that curly styled hair looks a bit more dramatic. 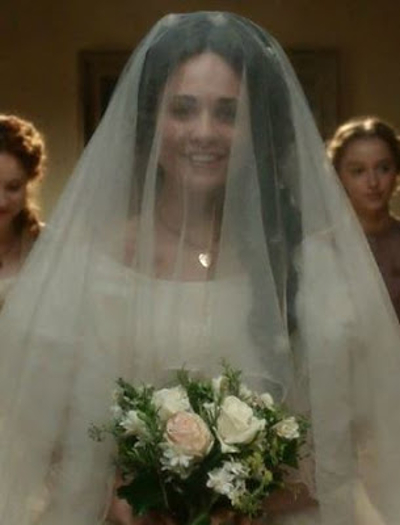 In the finale of the BBC Dickensian series, I loved how they weaved white silk flowers into Amelia's long dark hair. Perhaps you could add some rather dead looking flowers into your hair style or your wig. You can pop a veil over the top of the hair as well.

Amelia is wearing a big and traditional white wedding dress with puffy sleeves and a big wide skirt section, lots of silk, lace and frills. She has a large gold heart shaped locket around her neck and a bouquet with white and peach colored roses.