For fans of these novels and popular movies and shows on this theme, I've put together a detailed musketeer costume guide. I'm basing the styling on a fanciful French musketeer styling very much.

Alexandre Dumas, the wonderful French writer born in 1802, can most definitely be credited with helping to make musketeers so very cool with his popular, hit adventure novel The Three Musketeers and the other two novels that make up the d’Artagnan Romances.

I have enjoyed reading many of the extremely long yet exciting tales that he penned and I still like to dip back into them often for a re-read. This is the type of clothing and fashion that you could imagine the characters Athos, Porthos, Aramis and, of course, d’Artagnan wearing.

How to Dress Up in a Magnificent Musketeer Costume 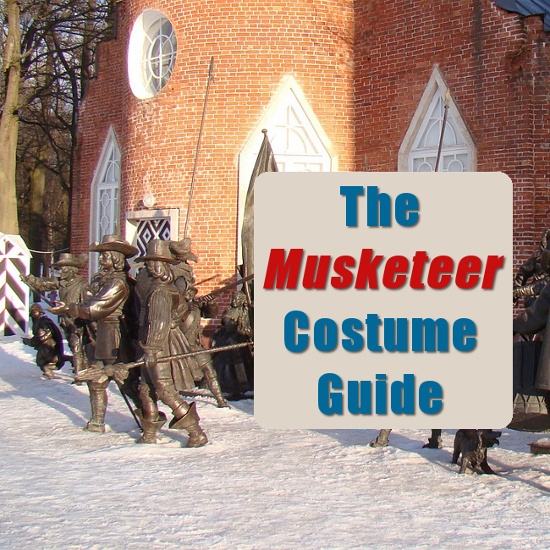 Image Credit: Original image shared by takazart on Pixabay with a CC License

There are always complete and ready-made musketeer costumes available to buy in many colors and sizes which can be convenient and save lots of time.

I always prefer the art of putting your own outfits together which I have shown you how to do with my key outfit components on this theme.

How to Dress as a Musketeer: Be Just Like the Historical Hero d’Artagnan for a Day

Get this Musketeer Costume Set from Amazon.com

UK Readers get a Musketeer Costume from Amazon.co.uk

This white and blue musketeer costume set includes a hat, tunic, gauntlets and boot spats. It provides most of the look that you need for this historical character.

Although I prefer putting costumes together from individual parts and accessories for a more authentic and unique look, I'll demonstrate that further below in this guide, sometimes it's just quicker and more convenient to buy an outfit or set which has most of what you need already. 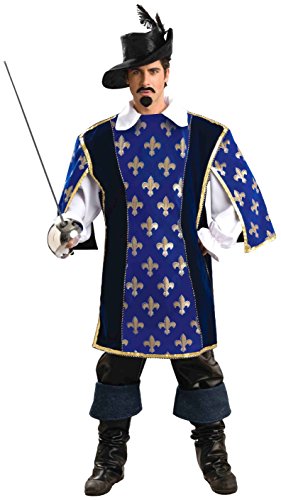 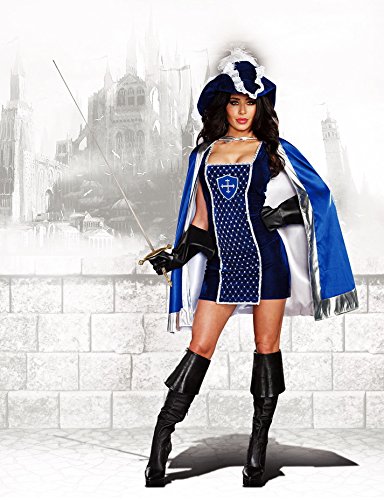 UK Readers get a Musketeer Costume from Amazon.co.uk

Even if you're not planning to buy ready-made, it is really useful to view these sets as ideas and inspiration for making or putting together your own costume. You'll often find more detailed images on the actual product page that you can view. 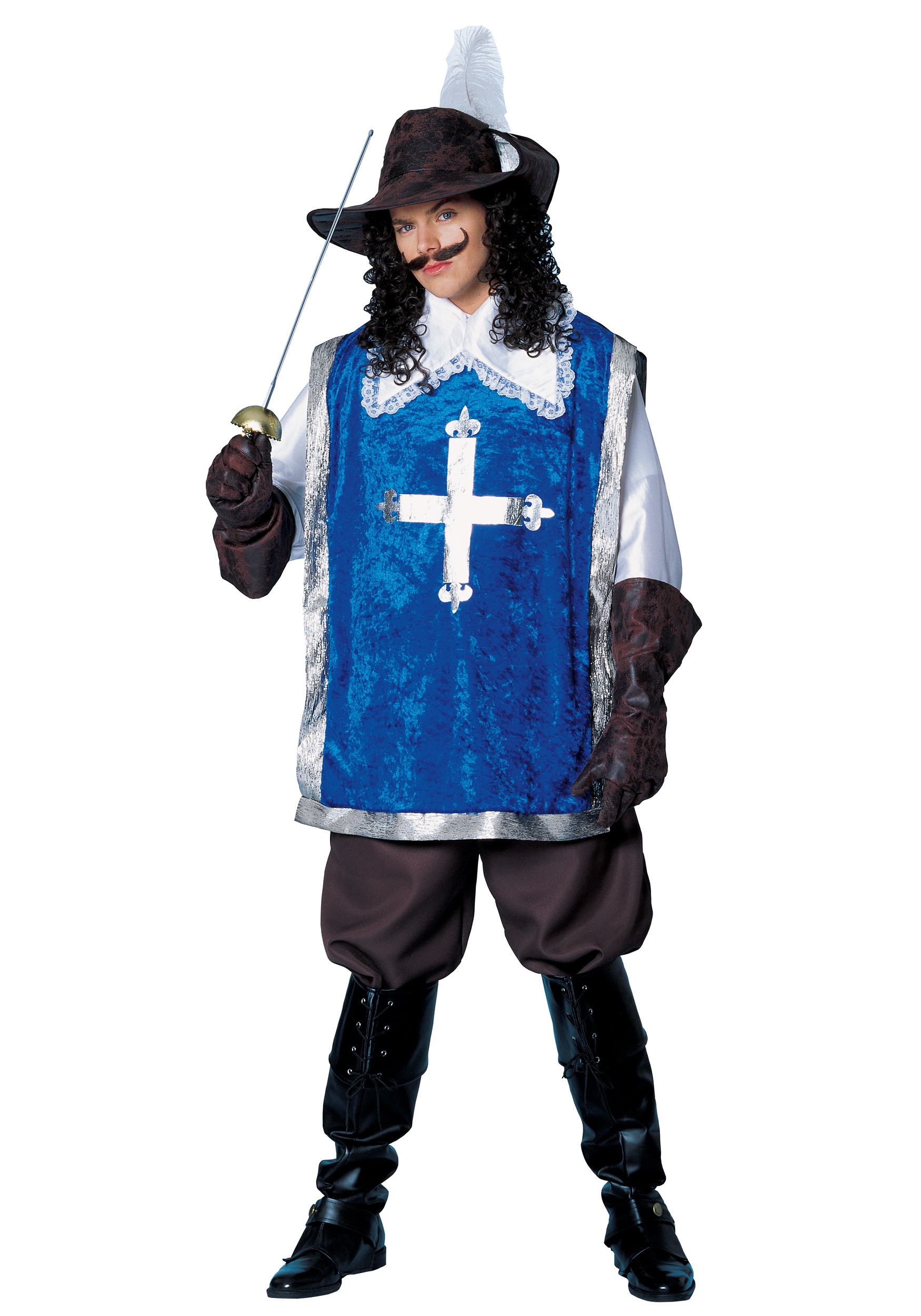 Always check when purchasing a costume set exactly what is included. Often the accessory items like hats, wigs, footwear and weaponry are items that you may still need to buy or find to make it really stand out.

For convenience and speed of getting an outfit for an occasion such as Halloween, you can easily buy the ready-made musketeer outfits, as you've seen, for many ages and sizes.

Personally I think that costumes that you make or put together yourself end up looking a lot better and the risk of bumping into someone wearing exactly the same style is far less too. Here's an informative guide to the main elements that you'll need to really pull off this look. 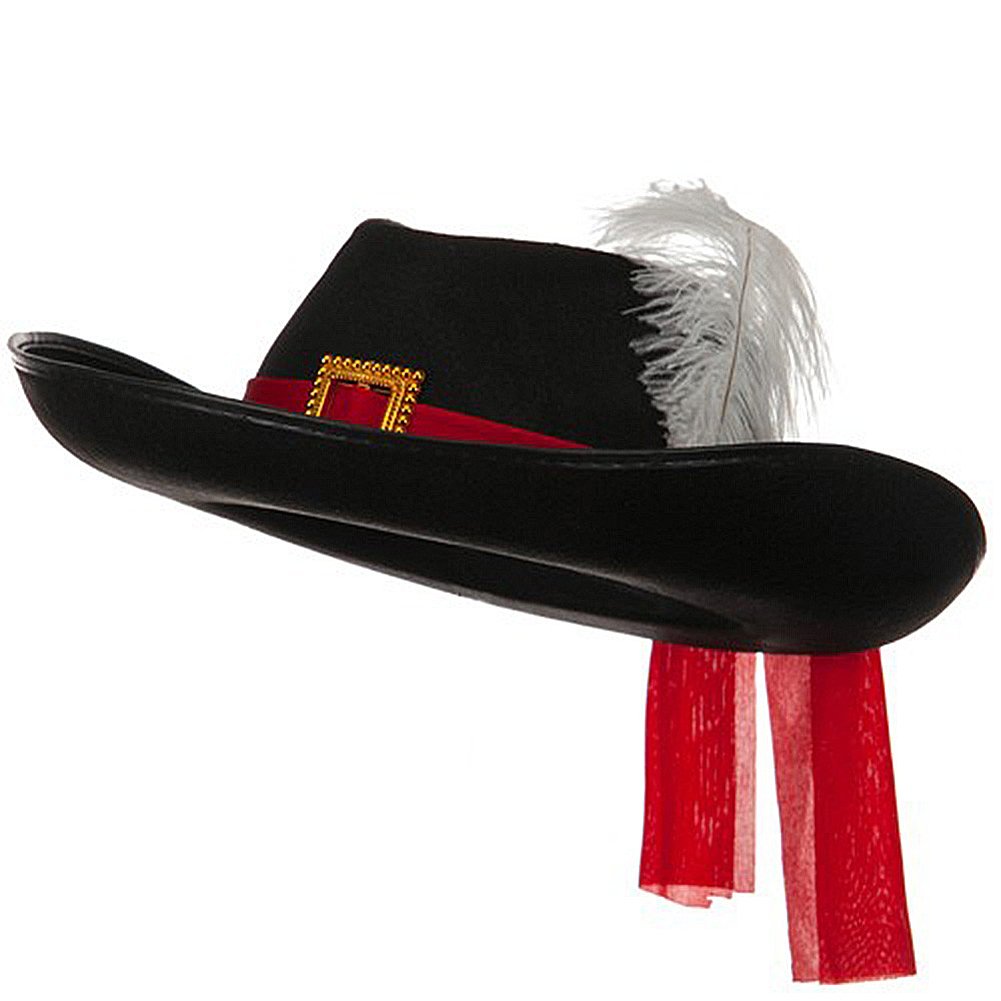 UK Readers get a Musketeer Hat from Amazon.co.uk

Many people will recognize your costume simply by the hat. This style of hat is also known as a cavalier hat which is essentially a wide-brimmed hat which is pinned up on one side and has a feather plume attached for a really dashing and debonair style.

If you're having trouble getting hold of the exact hat you want, you can make your own cavalier hat by pinning up or hot gluing one side of an ordinary wide-brimmed hat and fixing on a colorful feather with hot glue. That way you can get to choose a feather color that will match in with the rest of your outfit. 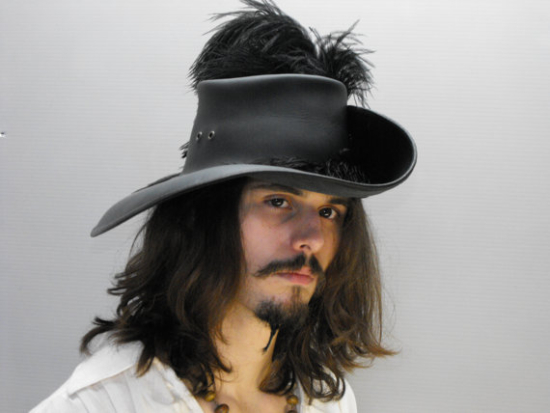 2: You Need a White or Ivory Renaissance Style Flouncy Shirt

A typical musketeer style shirt is a flouncy white or ivory shirt with a wide fancy collar and puffy long sleeves gathered in at the wrists and finished with ruffles at the end of the sleeves.

You can normally search for white Renaissance or pirate costume shirts which will work very well for this look. Get a white or cream shirt with long and wide sleeves gathered in at the wrists and plenty of fabric to it around the body but preferably not one with frills down the front.

3: A Sleeveless Tunic Worn Over the Top of the Shirt

Over the top of this shirt would be worn a sleeveless tunic or a tabard. This could be sleeveless or slit from the shoulder down to reveal the shirt sleeves underneath.

A sleeveless tabard style tunic gives you a very good idea of how to look. You could also buy a shirt, use plain black trousers and make a sleeveless tunic yourself. 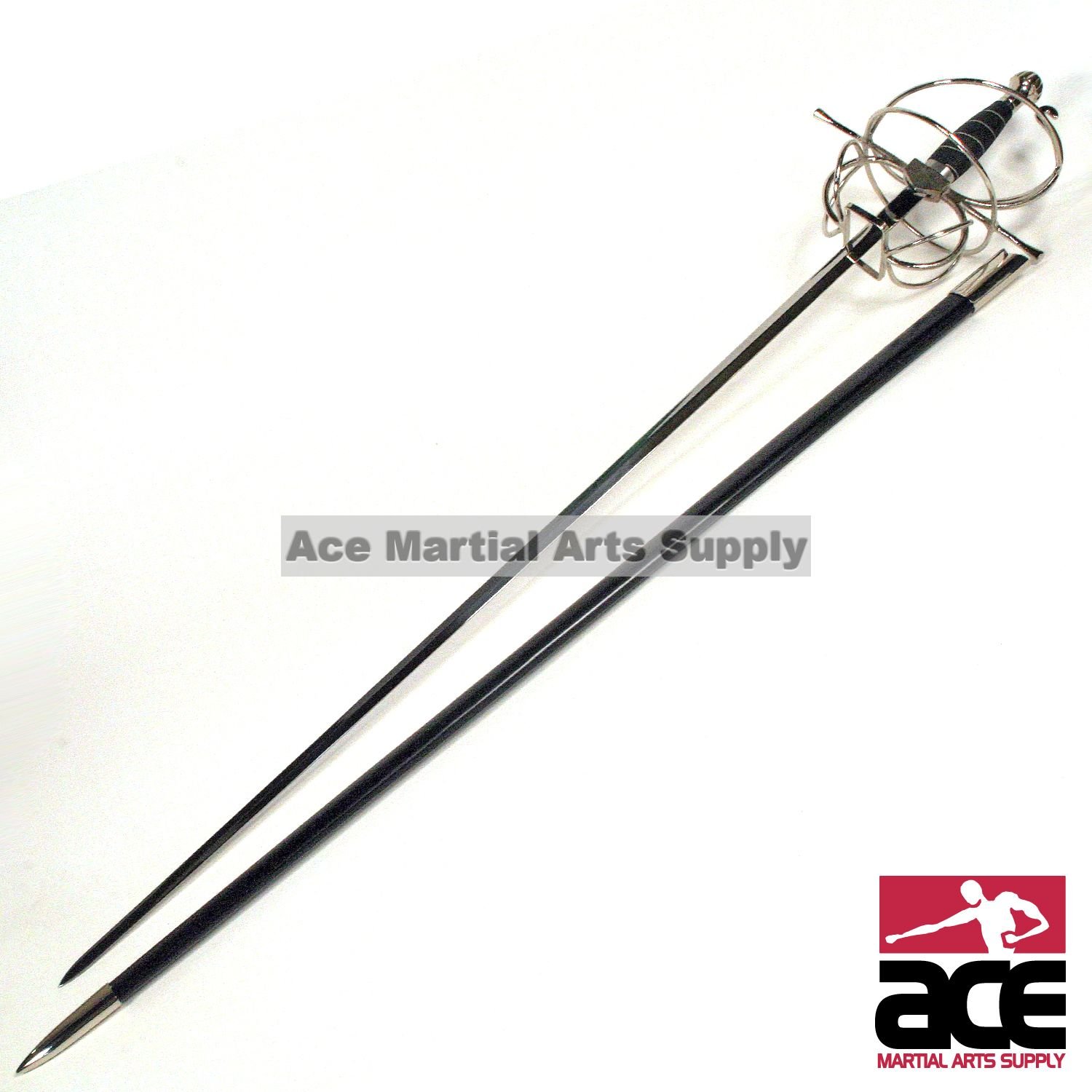 You really cannot be a member of the French royal guard without a proper fencing sword. Although these infantry soldiers were named because of their use of muskets, it is the elegant rapier sword which they used more often due to how much more practical it was. And it's the sword that's been popularized in books and movies too.

You can get plastic costume swords which are best for kids. But there are some really good looking swords which many people do use for cosplay and Halloween. Just be aware that these are indeed sharp and not toys to be trifled with. 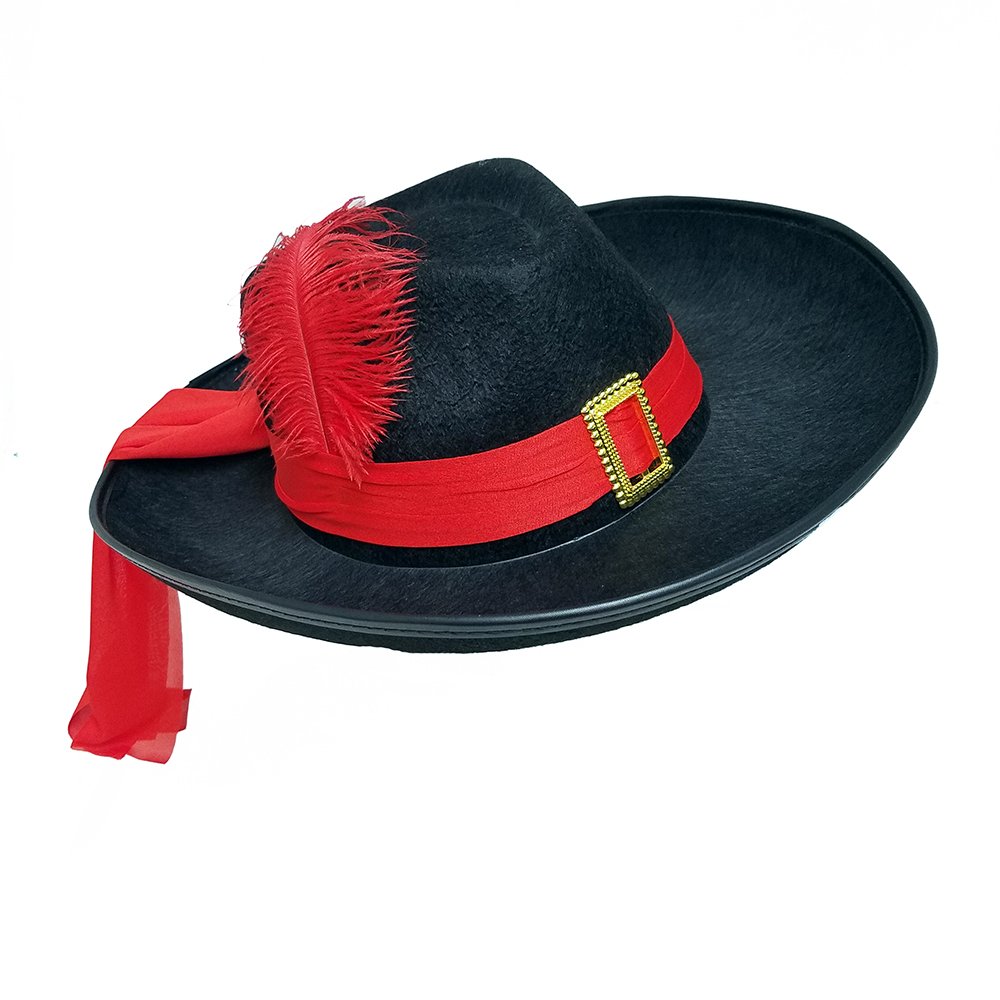 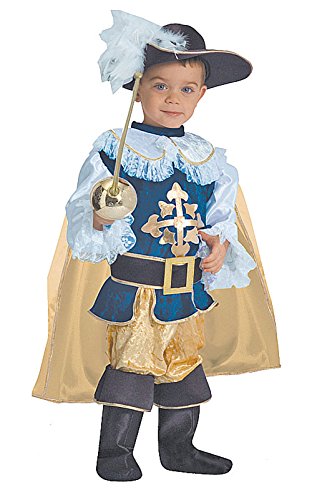 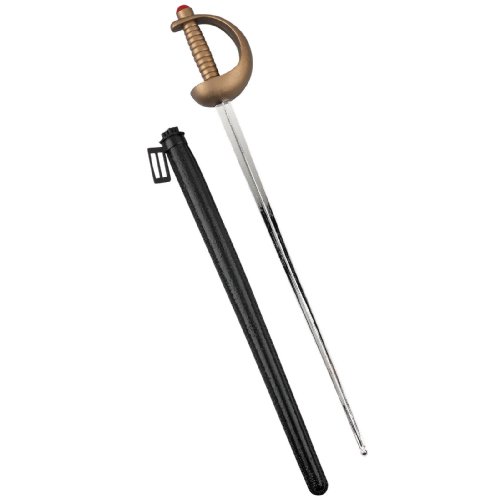 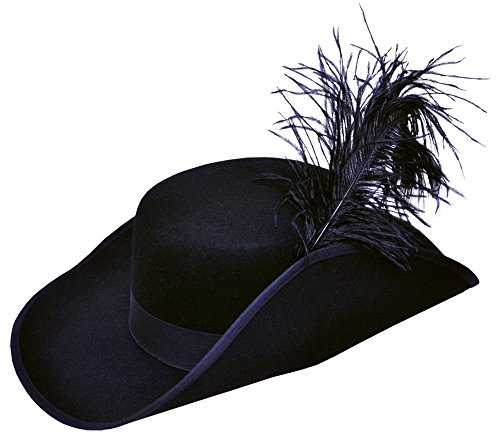 The real French Musketeers date back all the way to 1622 which is the period of rule under King Louis XIII. They were so-called because they used firearms which were known as muskets.

These soldiers formed part of the royal guard and because muskets were simply not that practical for everyday use (they were very heavy weaponry to carry and also slow to load and re-load with gun powder) the soldiers were well trained in using a rapier sword too which could be used much more easily in close quarters.

Black leather gauntlet style gloves which cover the cuffs of your shirt are a dashing accessory to add to your costume. The gloves not only look elegant but they would have afforded a modicum of protection to a musketeer's hands while sword fighting. 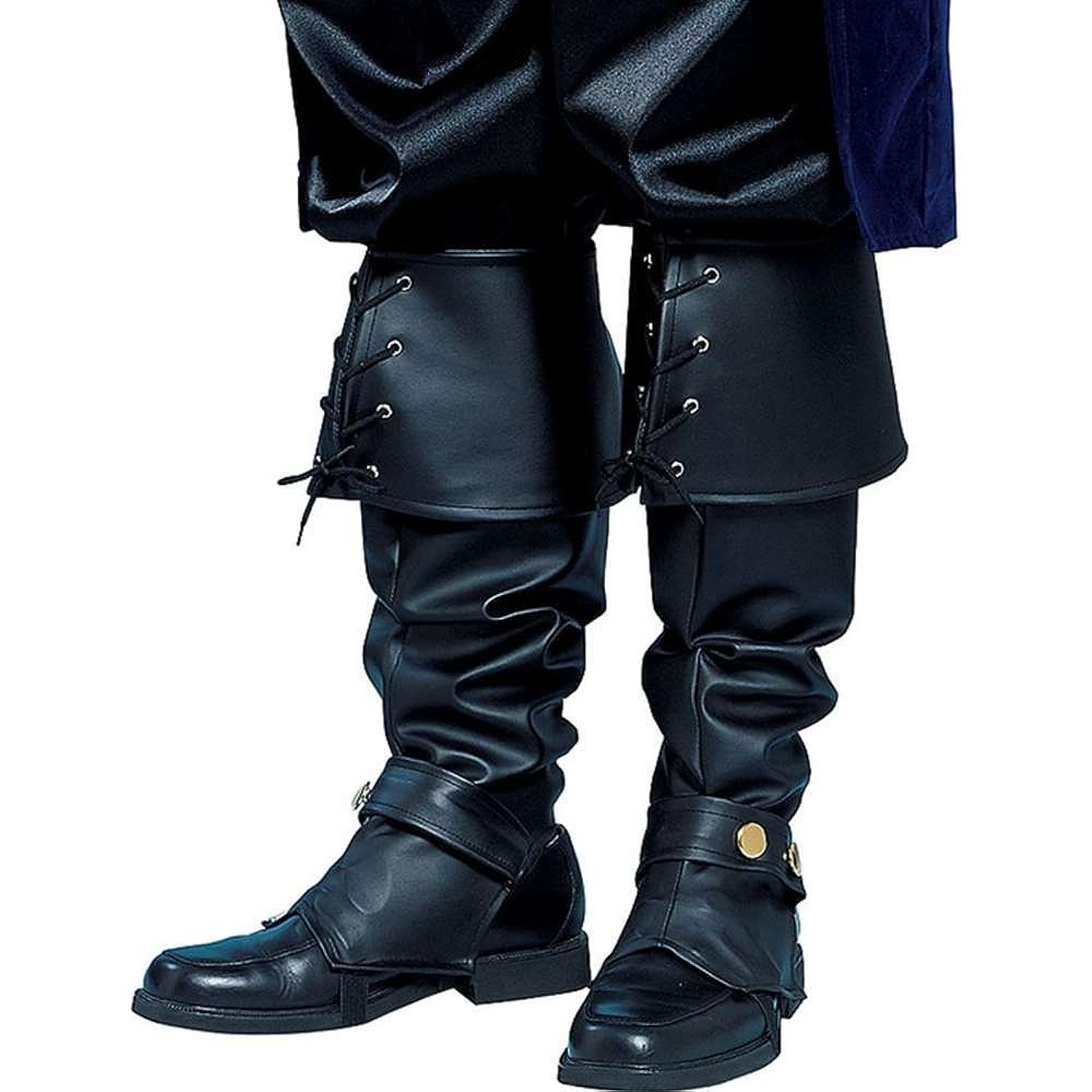 Finishing off the costume in a typical flamboyant style are the boots. You can buy boots with the standard wide and turned down tops. A cheaper method is to purchase boot tops which slip on over your shoes to give the appearance of boots. Look for pirate, renaissance or musketeer style boots to complete your dashing and debonair look.

Musketeer Sewing Patterns: Make Your Own Outfit or Get Someone to Sew it For You

If you want to make your own costume or you have someone else to sew it up for you from a pattern, then this can be an ideal way to get exactly what you want with the choice of fabrics and also colors too. There are musketeer sewing patterns to buy (McCalls, Burda, Simplicity) that can suit all the family and even one which makes for a very alluring female dress for females wanting to take on this character too.

A royal blue color is a more traditional option for a French musketeer costume with the pants and tunic but you could choose a regal red or a dashing black instead. In fact, Cardinal Richelieu’s personal musketeer guards wore blood red tabards. If you want an idea on making a tunic for a child, here is a free tutorial page on making a very simple costume tunic. 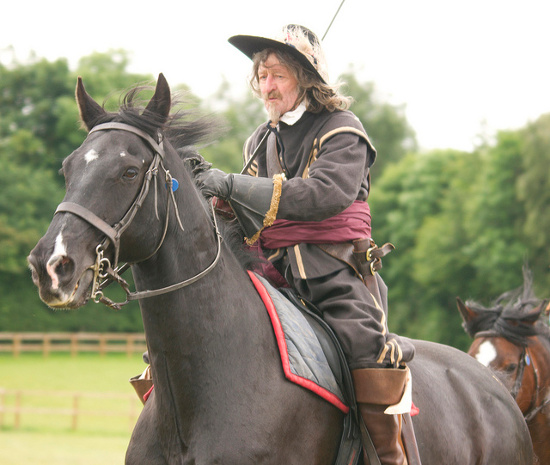 Image Credit: Shared by Barry Skeates on Flickr with a CC License

This character for many people conjures up the very image of the Royal French Soldiers that were popularized by writers such as Alexandre Dumas. But they've actually existed in history from as far back as the 14th century and across many countries in the world too. They were so-named because of the weapons they used which were Muskets and were infantry soldiers which means they fought on foot.

This article has focused on the popular image that we have of the amazing and rather flamboyant French soldiers who were also trained in and used the rather more refined and elegant rapier sword.

Of course, another idea is to make your own range of garments using readily available sewing patterns because that way you can be sure of being completely unique for your Halloween or party endeavors. Have fun dressing as this character.

More Costumes for Men to Wear