The Beast from Beauty and the Beast Costume

For boys and for men, the Beast from Beauty and the Beast costume is going to be a hot one this Halloween. With the new live action movie we have the glorious Dan Stevens in the lead role as this enchanted prince.

Learn how to dress up as this complex character of the Beast so you can win the heart of your own fair lady so you can be with her for Evermore. It is never been a better time to go with this dressing up theme.

Who'd have ever thought that Belle could fall in love with a hulk of a monster. But once she realizes that beauty is only skin deep and that he has a beautiful character, she falls under his spell.

The BEAST from Beauty and the Beast Costume Guide: Dress Like Belle's Enchanted Prince 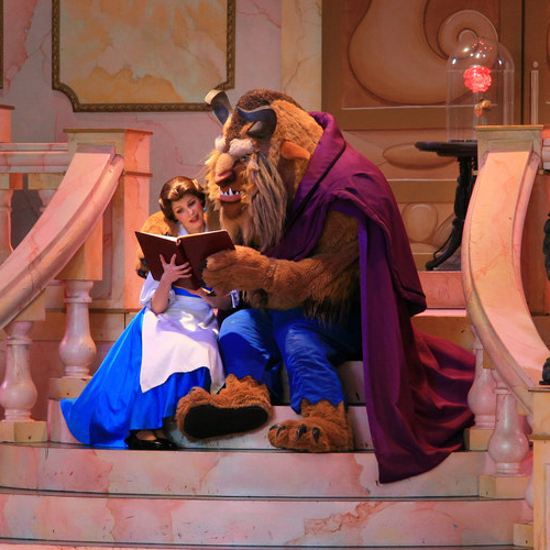 The Beast from Disney Hollywood Studios with Belle. This is based on the older version of this classic tale. You probably want the new live action costumes which are also available on this page.

Image Credit: Cropped Image Shared by Richo.Fan on Flickr with a CC License

⭐ It's not too hard to dress up as The Beast from Beauty and the Beast with all the complete and ready made Beast costumes on offer.

You can also pull together your own look by using a mask and choosing the appropriate princely wear. I'll be showing you both options on this costume guide page.

In the animated version, you are Prince Adam who has been cursed to look like a foul beast unless someone falls in love with you. In the new, live action movie you are a more complex character who was devastated by his mother's death and led astray by his cruel father. 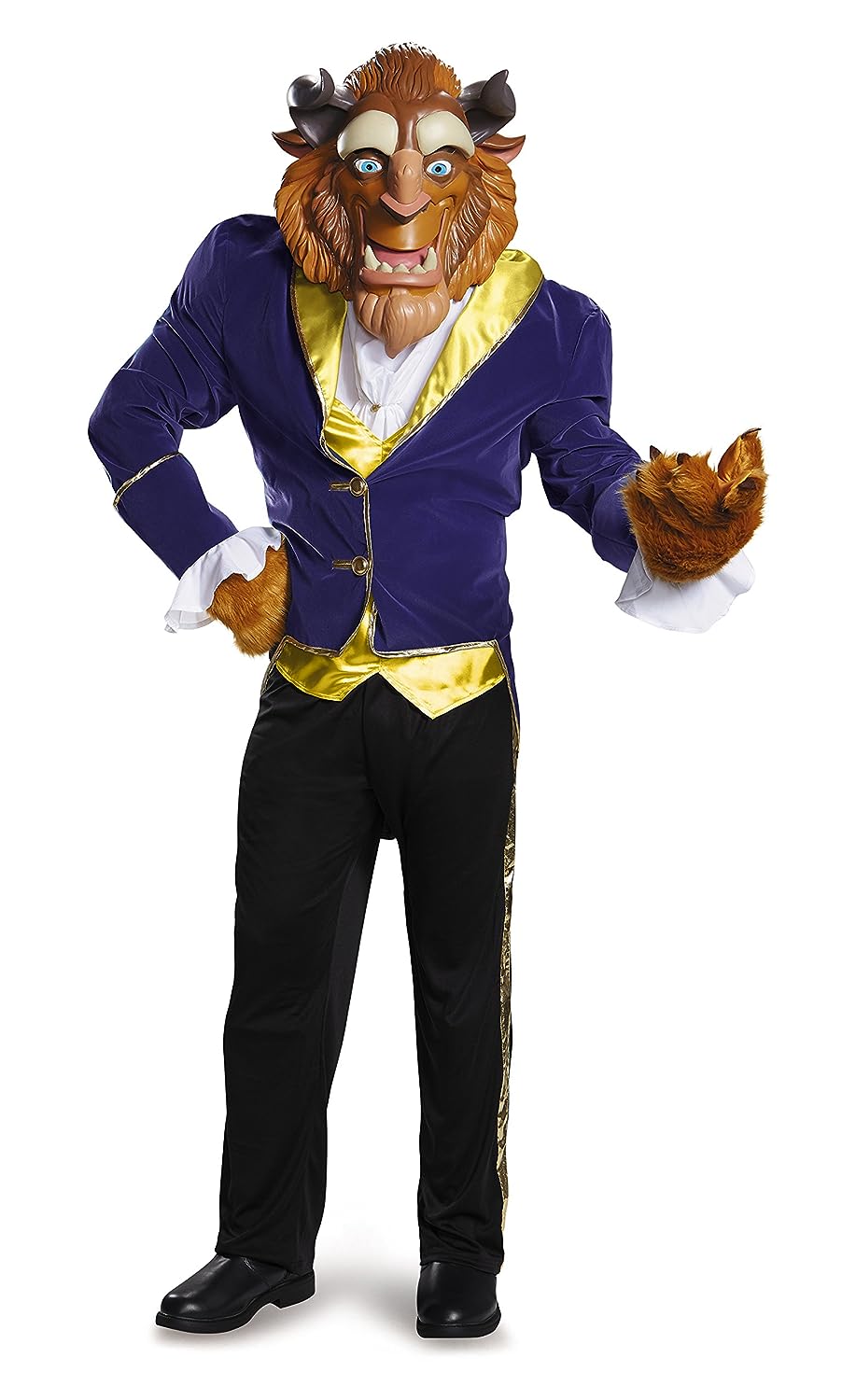 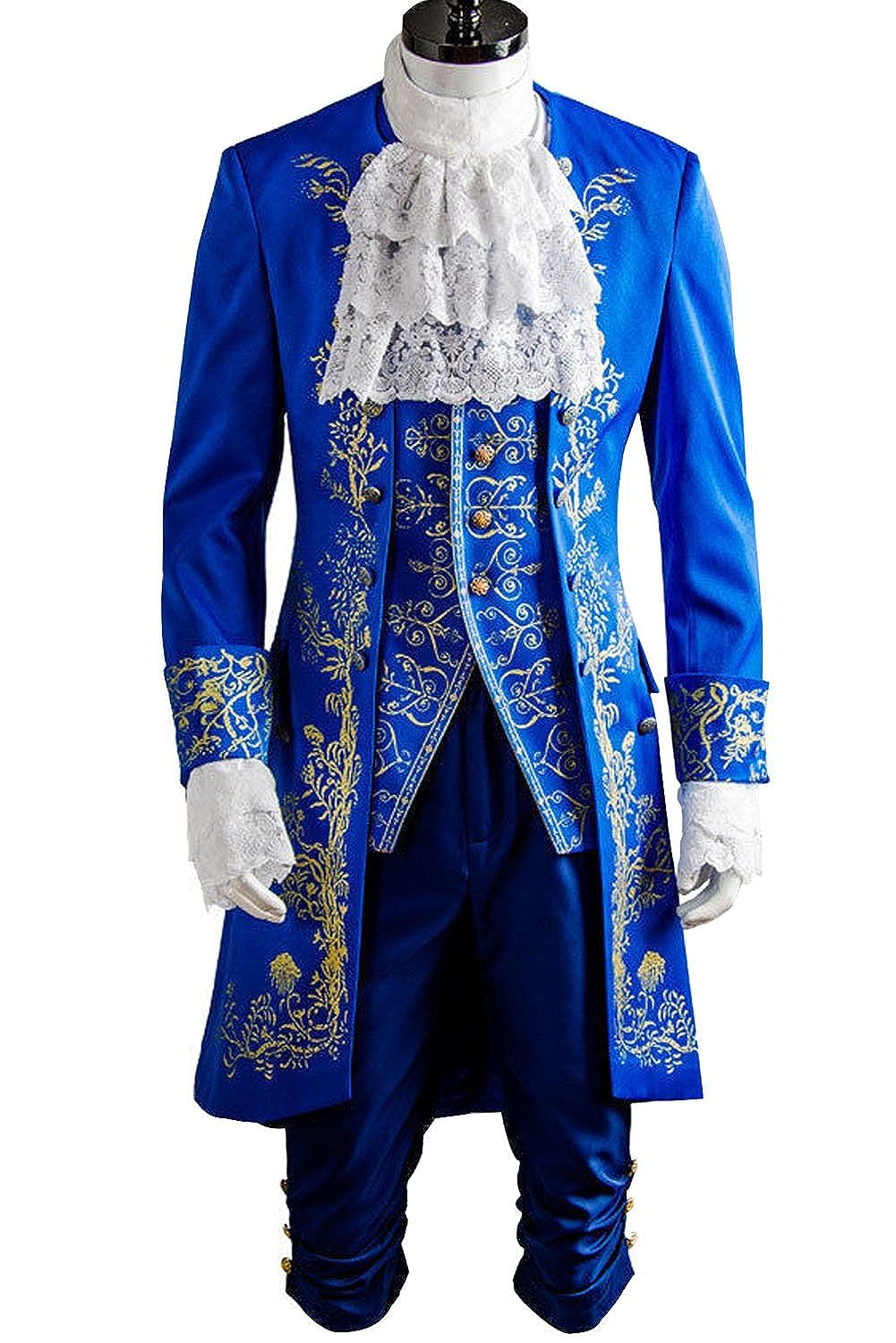 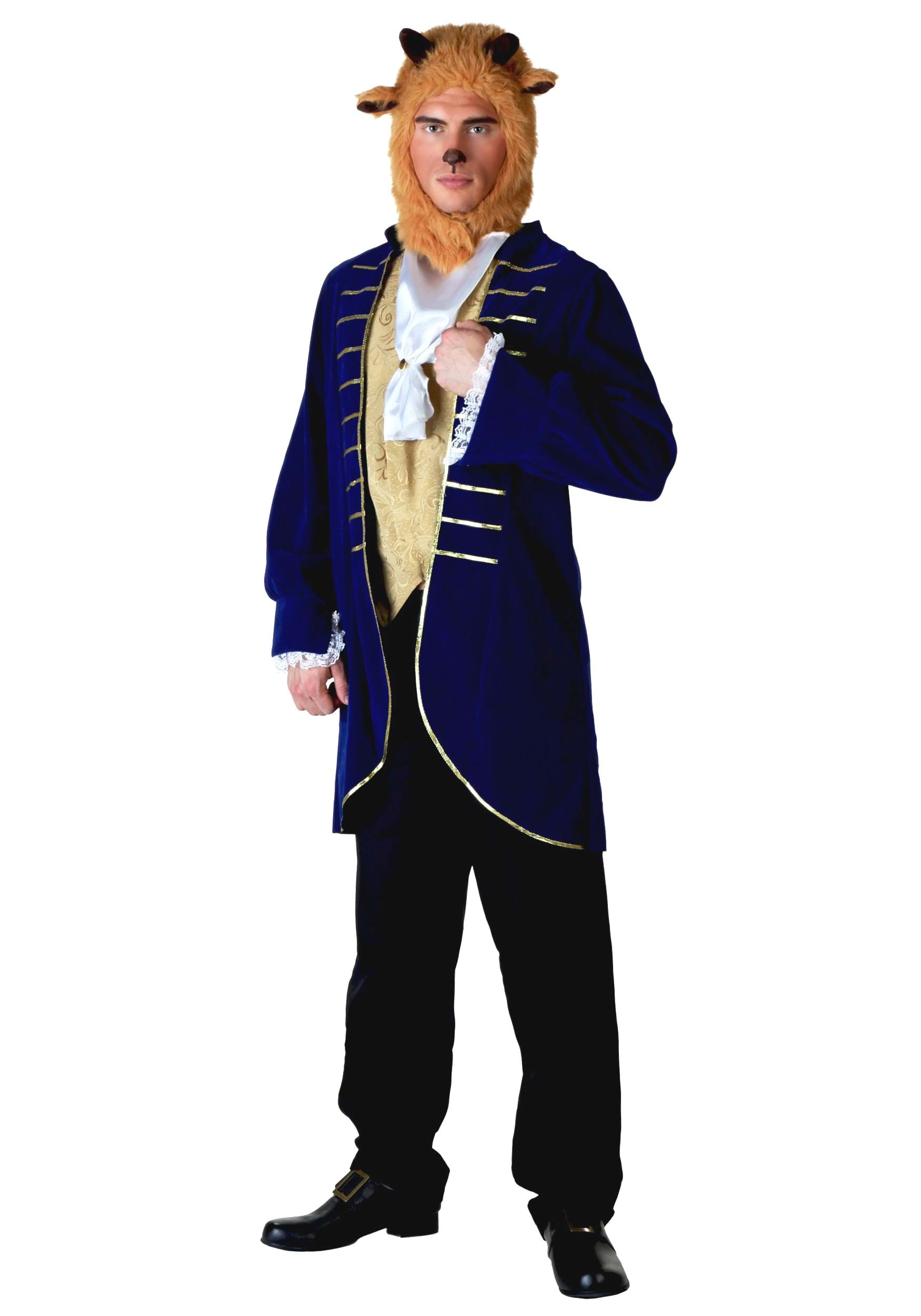 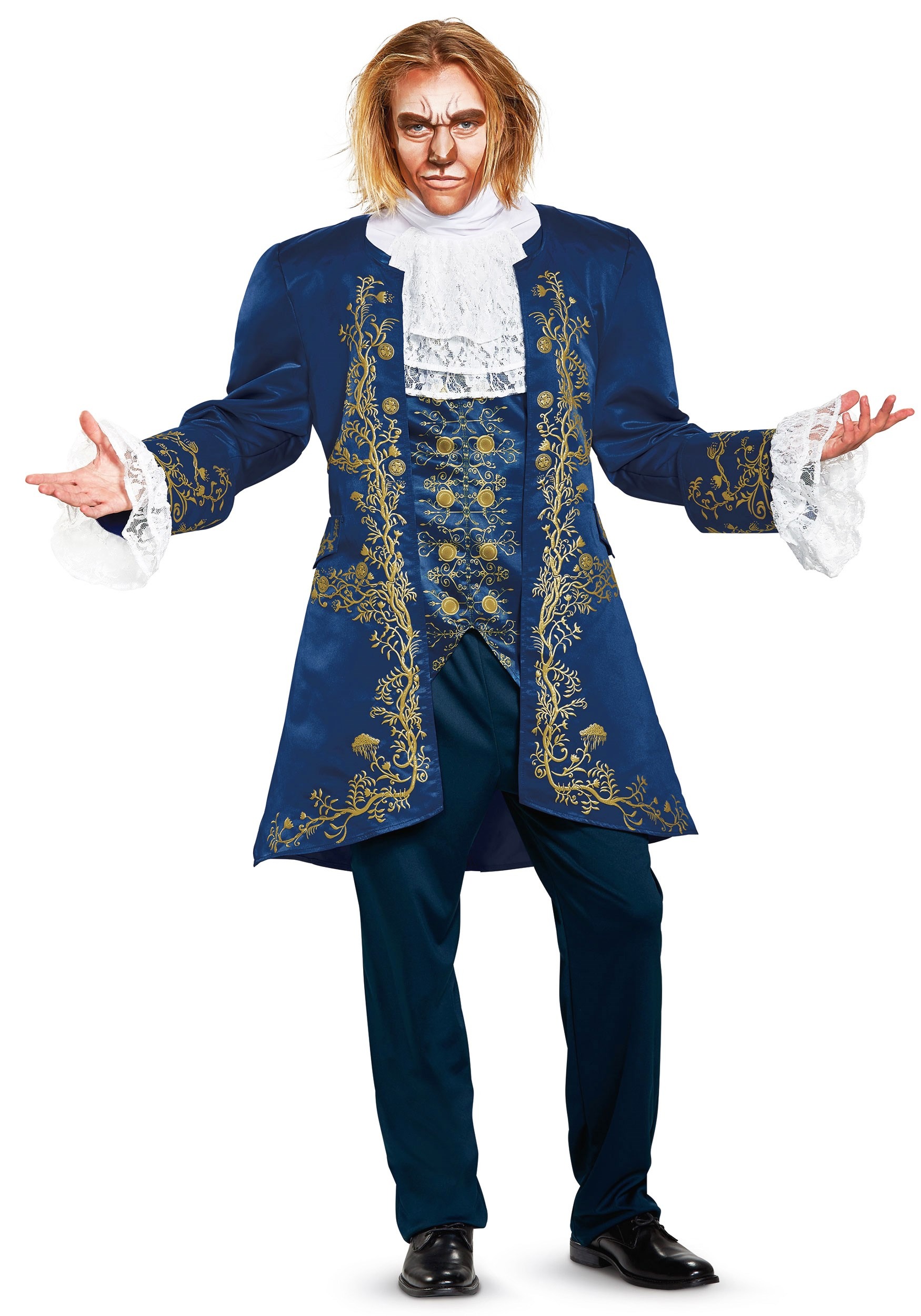 UK Readers get a Mens Costume from Amazon.co.uk

Dan Stevens plays this lovelorn beast to perfection in the latest movie. We see a beast who is a tragic and torn figure. He wants to love but dares not to. The Beast is willing to let Belle go in the end because he loves her so much that he wants her to be free of him and his curse. His love is of the most powerful and enduring kind and that's why so many women are totally enchanted by this character.

There are also outfits that younger boys can wear too. Dad and son could dress up as the same character for Halloween even. 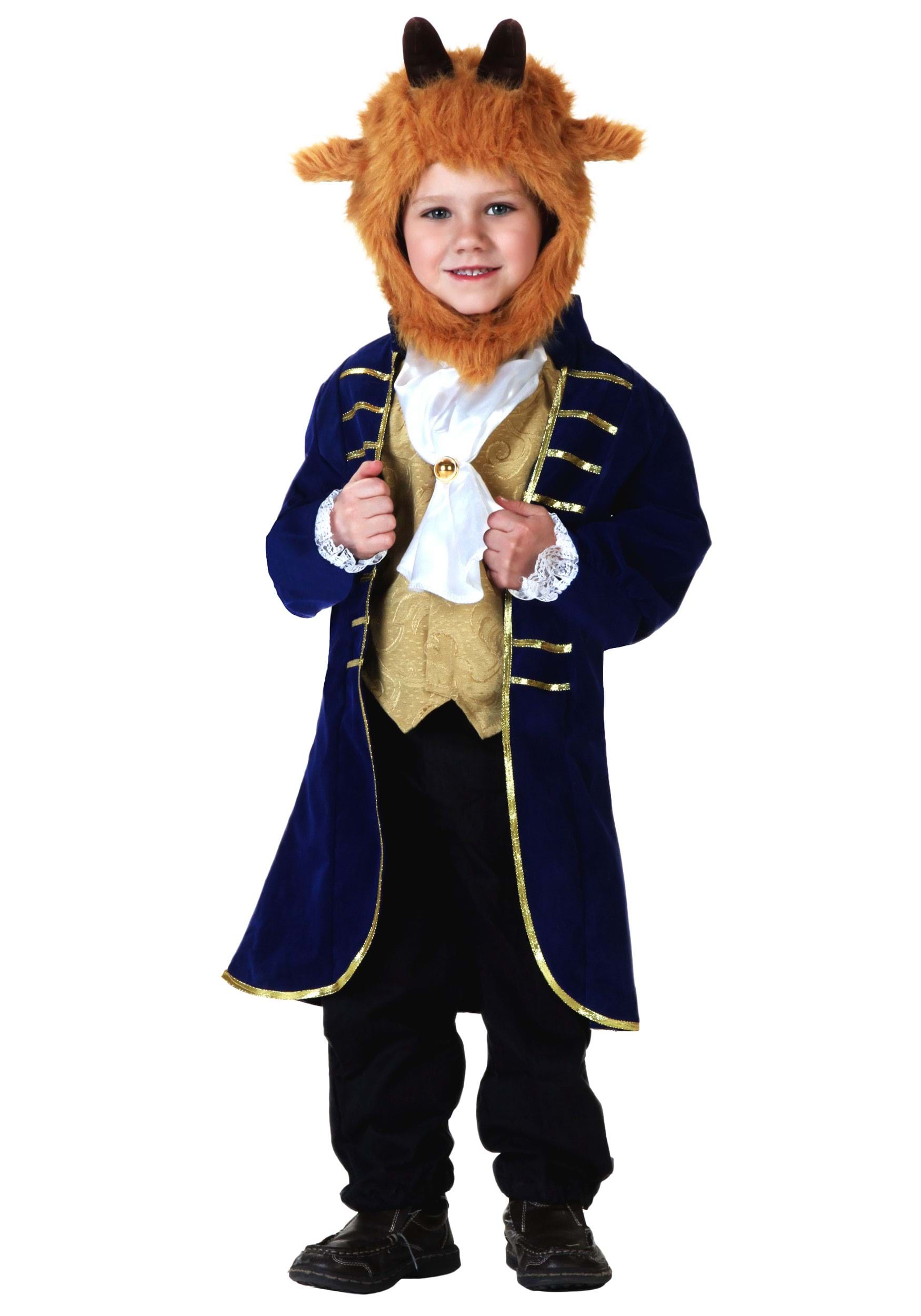 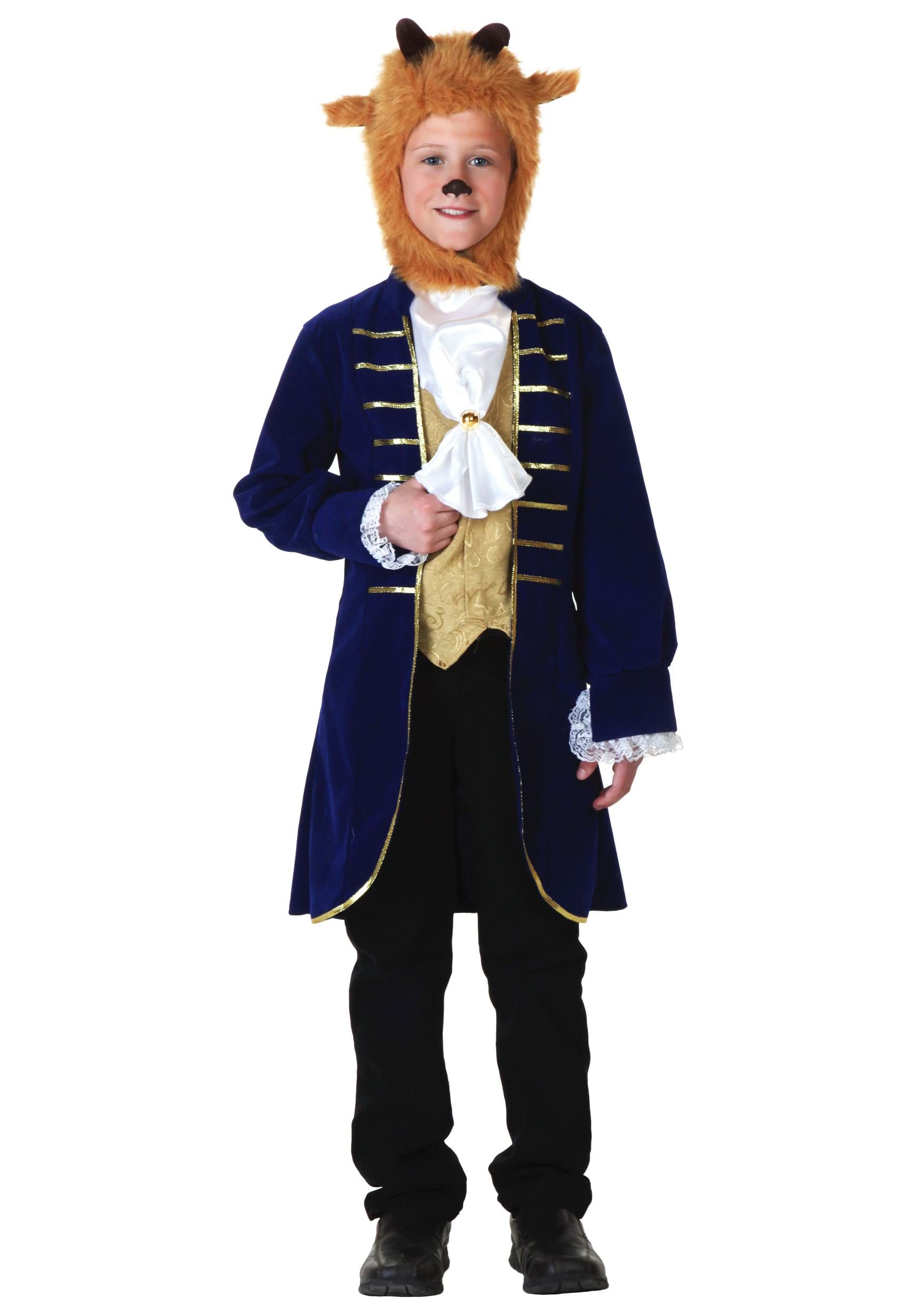 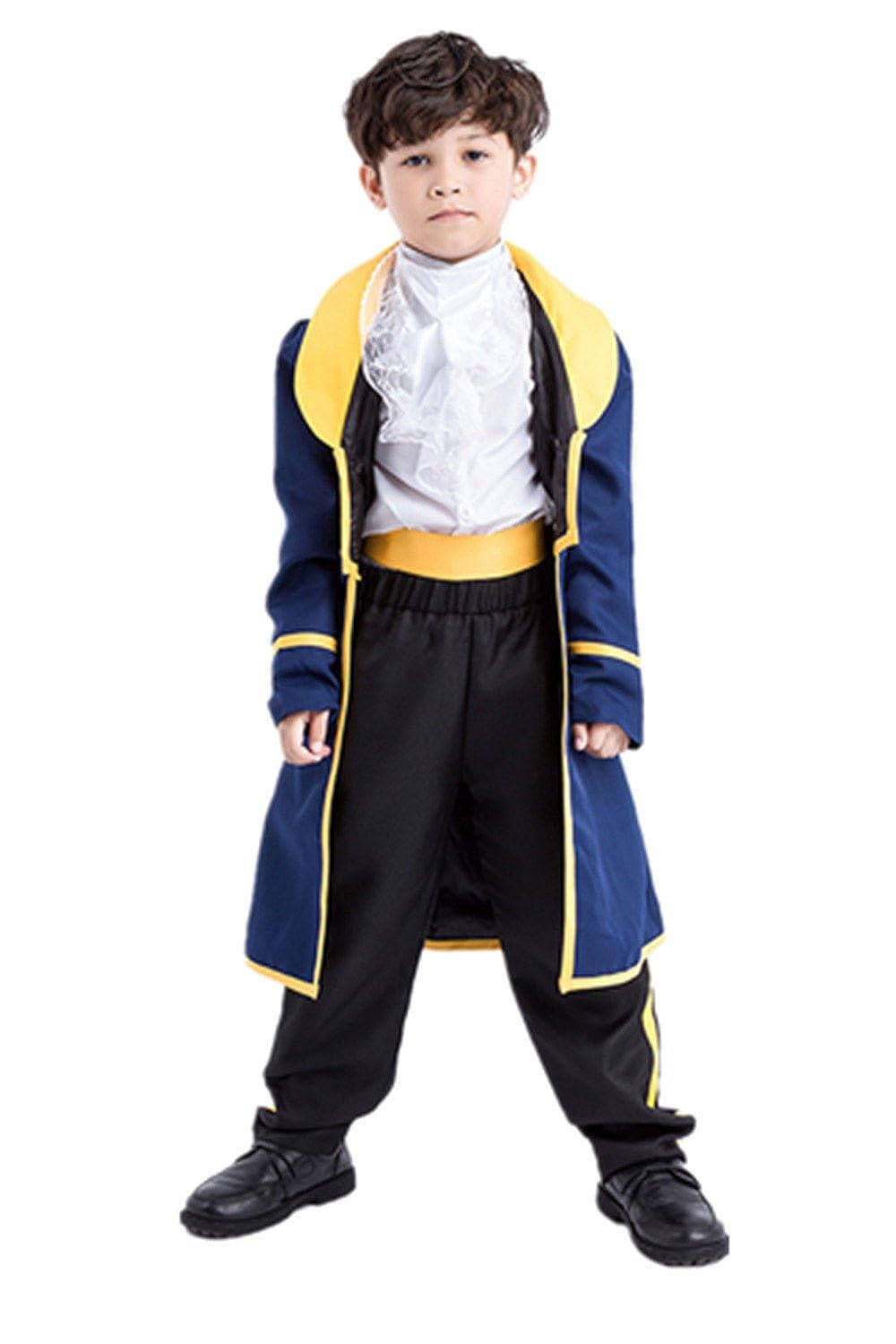 UK Readers get a Child's Beauty and the Beast Costume from Amazon.co.uk

There is even a female version of this character's outfit that women can wear for Halloween and other occasions. This one pictured below comes from HalloweenCostumes and I love the style of it. 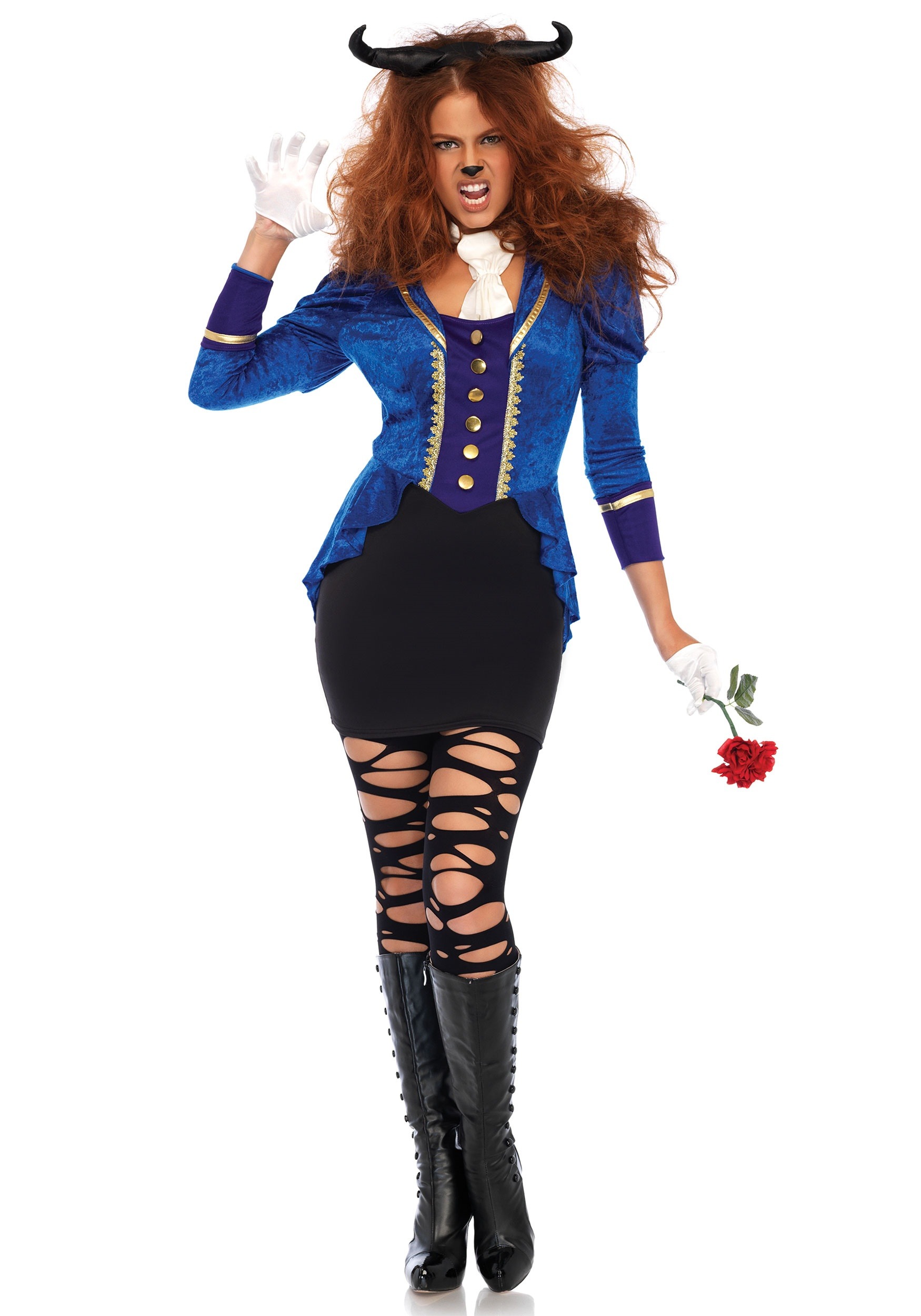 This very beastly looking design includes a royal blue crushed velvet one piece dress. It is designed like Prince Adam's blue suit with a row of decorative shiny gold buttons down the front. You even get the horned headband to really pull off the look. 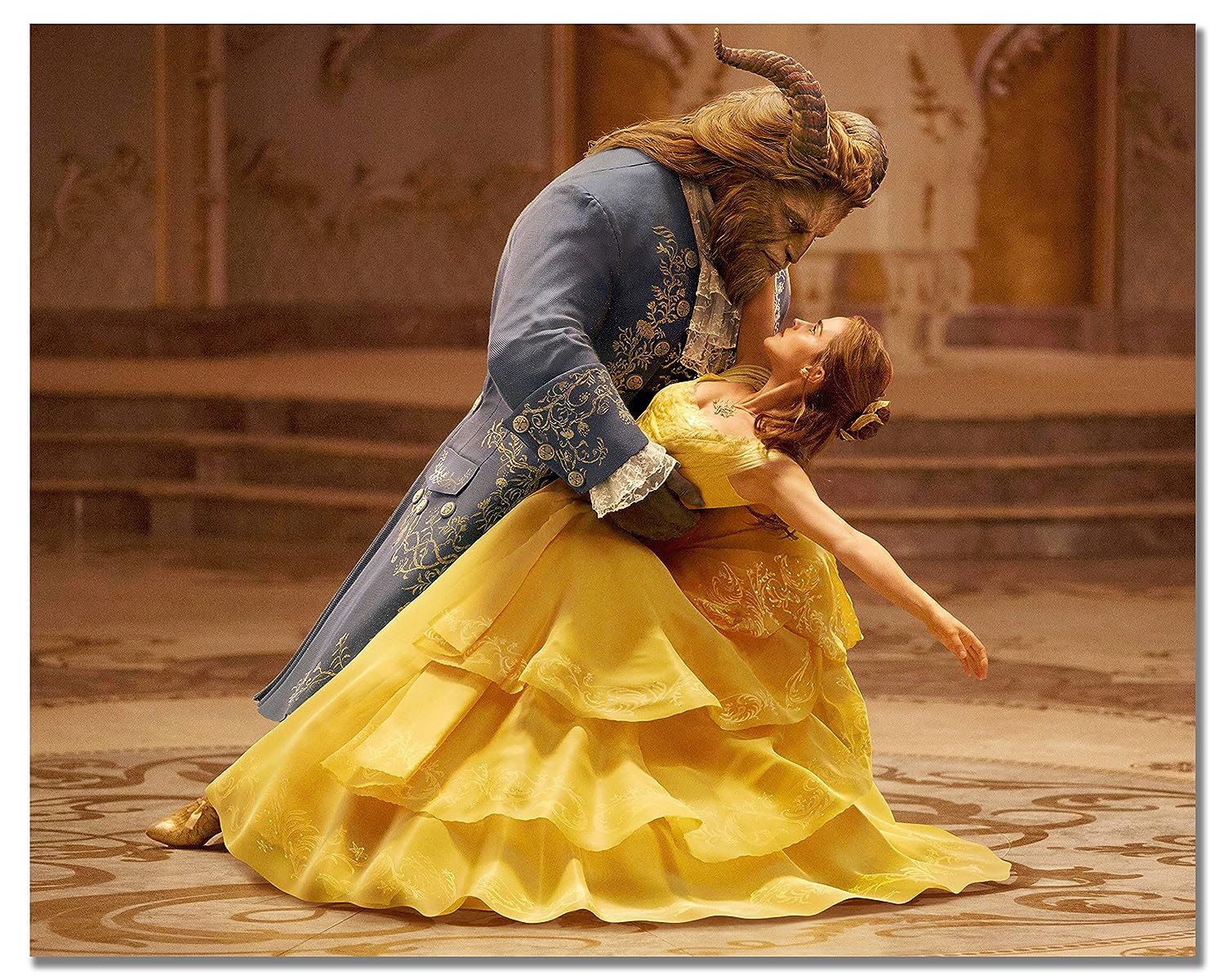 This photo shows the best look for The Beast when he is dressed in his dashing blue suit ready for the dance with Belle.

It might take some creative thinking to pull off a convincing face for the Beast.

You can buy a Beast mask (some ready made costumes include a mask) or, alternatively, use face paint to make your face brown and then use a wig and some costume horns. 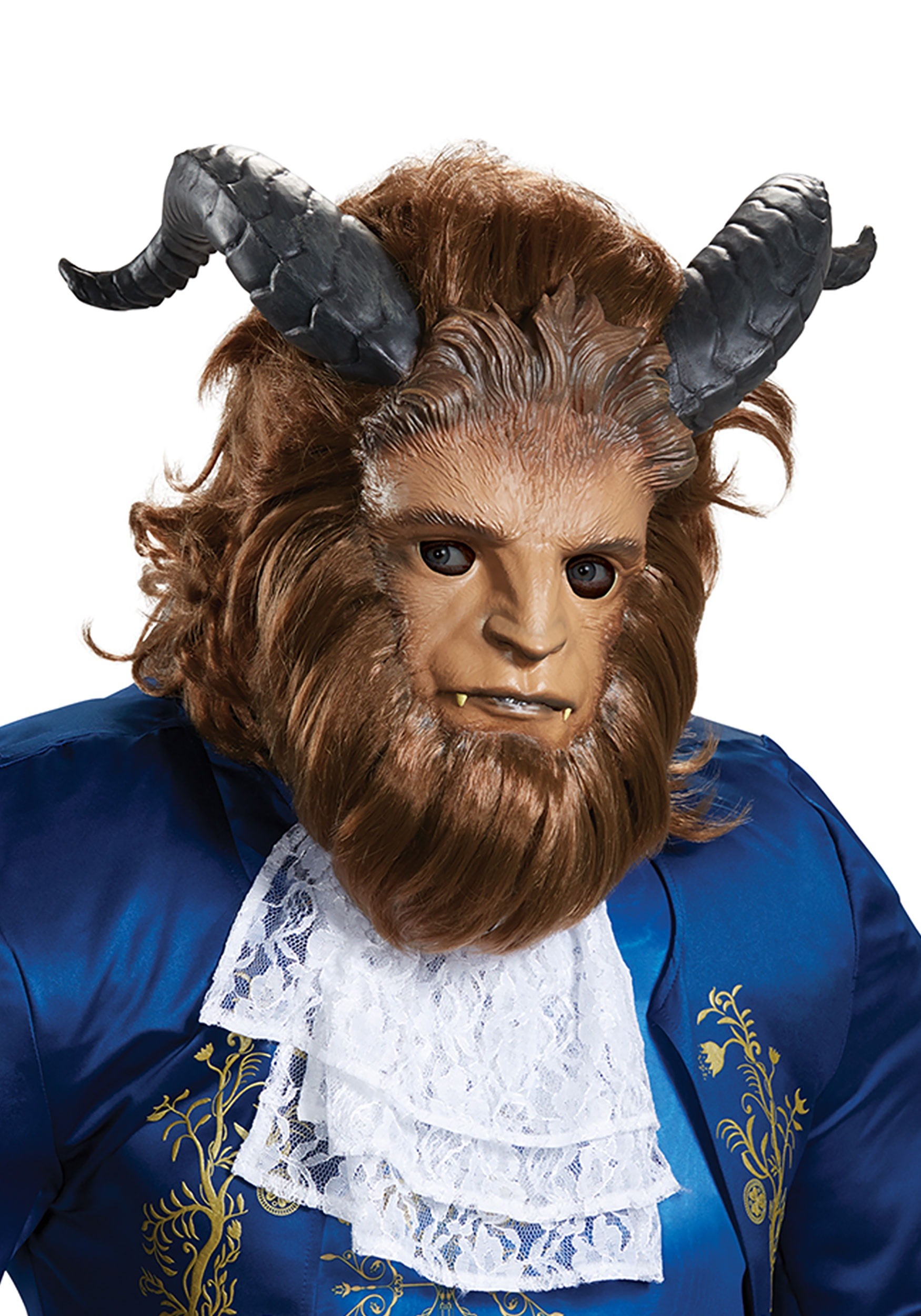 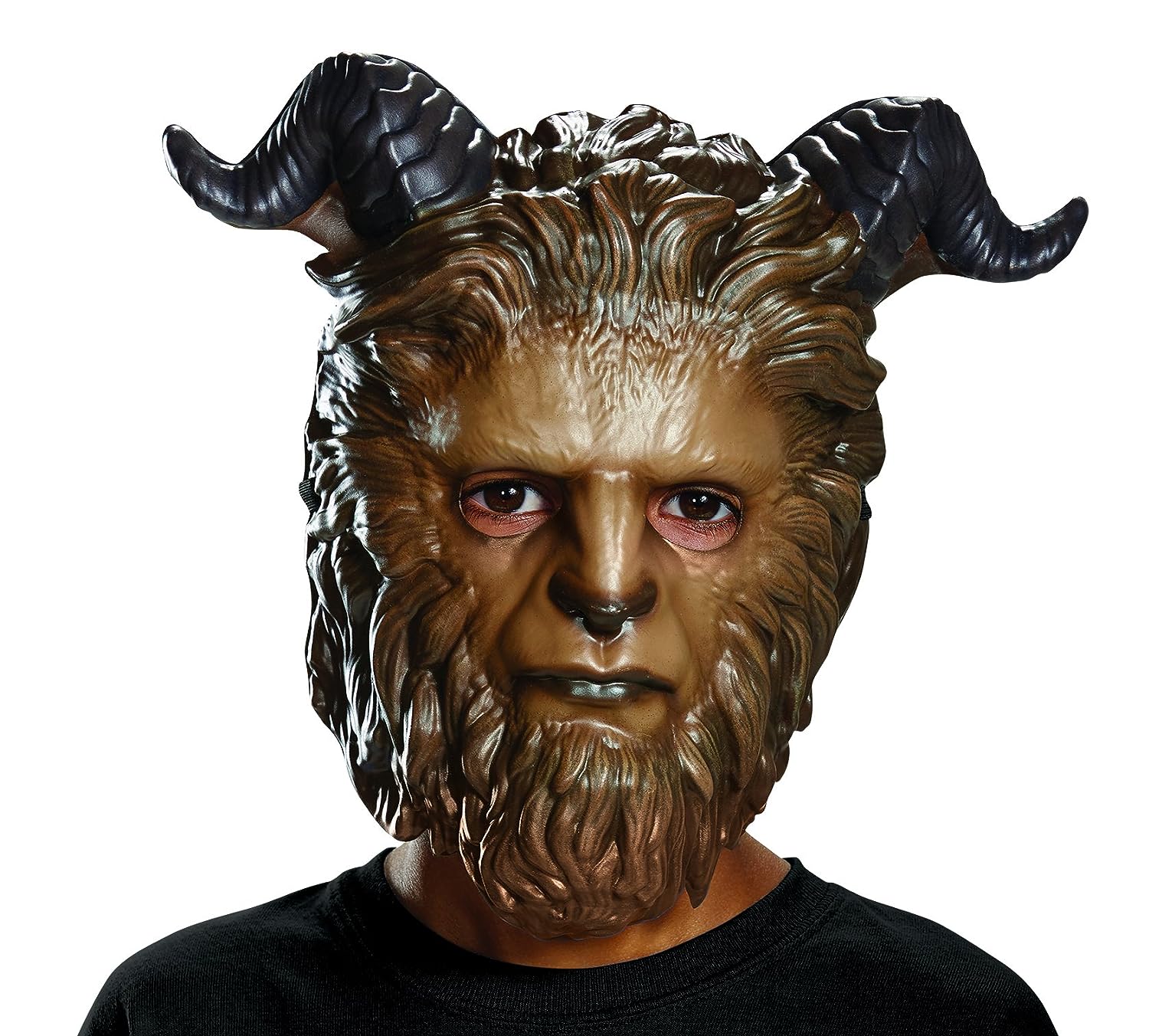 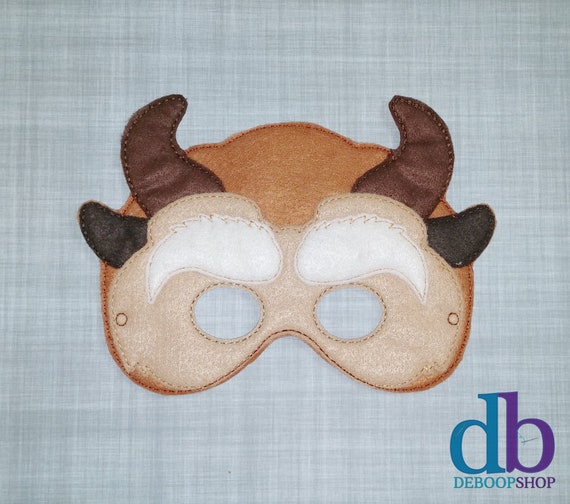 Be aware that this character's horns do not point upwards but instead point backwards towards the back of his head. There is a nice curve to them. You might be able to use a variation on ram horns if you cannot find any specifically for Beauty and the Beast cosplay.

⭐ Step 2: A White Shirt With Ruffles and Sleeveless Vest

The Beast wears a very lacy, frilly, ruffled white dress shirt - the kind that might look rather silly on a mere man. However it works very well on this character and serves to make him look less frightening and more prince like.

Lacy, white ruffles hang down from his neck and over the top of his sleeveless vest or waistcoat. The frilly sleeve cuffs hang well past the end of the arms on his blue coat.

The sleeveless vest or waistcoat is an absolute masterpiece. It is in a beautiful royal blue shade and decorated with extensive gold color embroidery and gold buttons. It is mostly covered by the long sleeve matching coat.

The Beast wears a breathtaking blue coat for his dance with Belle. It is exactly the kind of thing that you would expect an enchanted prince to wear.

His coat is a Royal blue (what else would do?) and matches the sleeveless vest or waistcoat that he wears.

There is beautiful scroll type gold embroidery all over the wide cuffs, across each pocket flap, around the hem of the coat and up each side where the buttons and button holes go.

For the buttons, of which there are many) they have used a darker antique gold rather than a bright gold color. There are 3 buttons on the outside of each arm cuff and many buttons on the coat edge down just past the waist area. 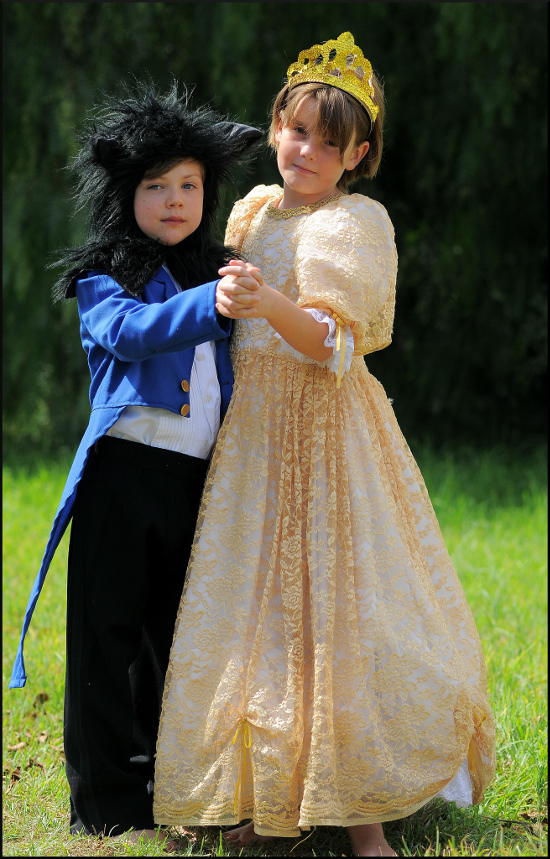 Image Credit: Shared by The Dress Up Place on Flickr with a CC License

You cannot see them very much under the long blue coat but this character wears close fitting dark blue pants or trousers.

These come under the knee and are cropped short to show off the rest of the Beast's furry legs. There are a short vertical span of gold color buttons (3) on the outside of each leg which are a great contrasting detail.

For a DIY version, you can take some existing blue pants, crop them under the knee and sew a few gold buttons on which would give the exact look.

You can see more images of the Beast's blue dance costume from the live action movie, here.

⭐ Step 5: His Beastly Legs and Feet

The actor, Dan Stevens, had to wear 10 inch stilts on set to get to the height required to play the Beast. You would not need to go to this effort for Halloween or cosplay.

His legs and feet are furry as you might expect and a medium brown color. You can actually buy brown beast legs. Just be aware that you need to fit some cropped pants on top so these would need to be wider to accommodate that.

For feet, you could also get beast hooves as a costume accessory or wear some shoes that match in with the color of your legs.

Beauty and the Beast BELLE Costumes for Adults

Beauty and the Beast Costumes for Kids

More on Beauty and the Beast

More Costumes for Men to Wear