Halloween Colors, Their Meaning and Symbolism

If you've ever wondered about Halloween colors, their meaning and symbolism, this page will give you all the fun facts and so much more.

You can hardly miss the main colors of orange and black for this Fall celebration since they are in all the stores on decorations, on so many costumes and even the Trick or Treating candy.

Discover why these colors are used, what they mean and what other colors now have associations with Halloween and October 31st celebrations.

Learn All About Halloween Colors, Their Meaning and Symbolism 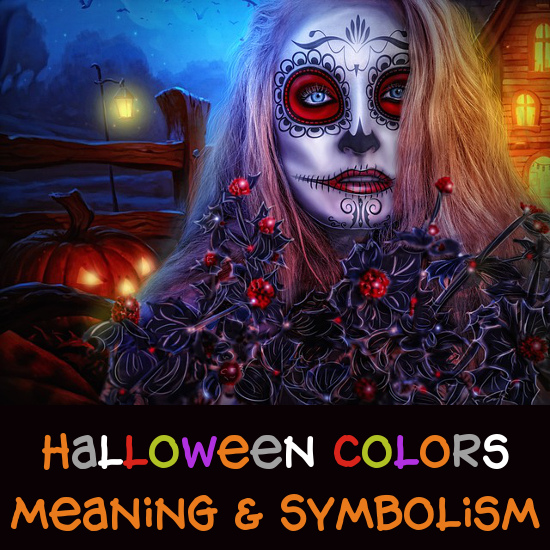 Image Credit: Original image shared by lightstargod on Pixabay with a CC License

In the run up to the Halloween season, you can discover some fantastic facts and trivia on this occasion for yourself and kids wanting to learn too. There is a whole wealth of information on the actual colors used during this time of year.

🎃 There's a handy table showing short meanings right here and then lots of in depth information on each color below. Because this page is packed with information, feel free to bookmark it, pin it or share and visit again.

What Two Colors are Most Associated With Halloween? 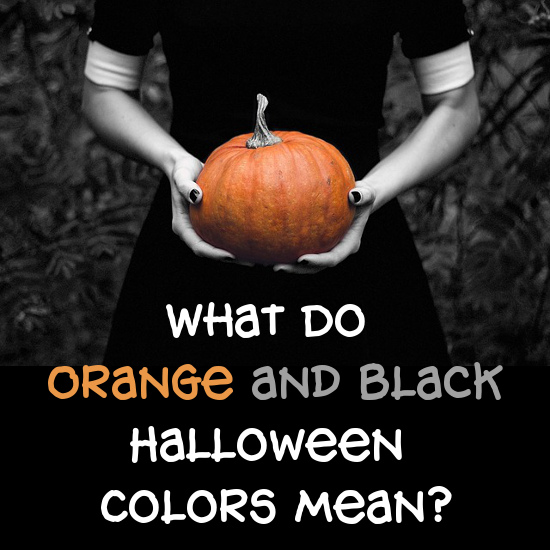 Image Credit: Original image shared by BarbaraALane on Pixabay with a CC License

Orange and black are the two colors most widely used and associated with Halloween. During the Fall season, you'll see these used over and over again with items in stores, decorated homes, costumes, candy and anything that represents October 31st.

Why these colors are used is explained below. They are far from being the only Halloween colors (as you'll soon discover) but they are the main ones. It would be hard to imagine a Halloween without them. Funnily enough they have opposite meanings too.

🎃 Orange and Black Halloween Colors: What do They Represent?

Image Credit: Original image shared by PublicDomainPictures on Pixabay with a CC License

Black is the color associated with death. The link between the theme of death and Halloween has age old links with a very ancient Celtic or Gaelic festival called Samhain.

From a historical point of view, it is widely believed that Halloween first originated from the festival of Samhain which celebrated the end of the harvest season and the beginning of winter.

At this festival, offerings of food and drink were left for the spirits or souls of the dead. Souls of dead family members were even invited to dine at feasts with places being set at tables.

Over time, black was a color that became heavily linked to death so it's not surprising that we now use it as one of the most popular Halloween colors.

On November 2nd which is just a few days after Halloween on October 31st, the Day of the Dead (Dia de Muertos) is celebrated in Mexico.

So there is a very strong link between the color black, the theme of death and this time of the year.

Black is the color of night. Halloween is celebrated at night time which is dark and mysterious. Evening can often feel spooky and scary, especially in the winter months when the nights get darker quicker.

It's not hard to go from this dark shade and its link with death to the fact that black is a color that simply feels rather oppressive, depressing and sometimes even evil. 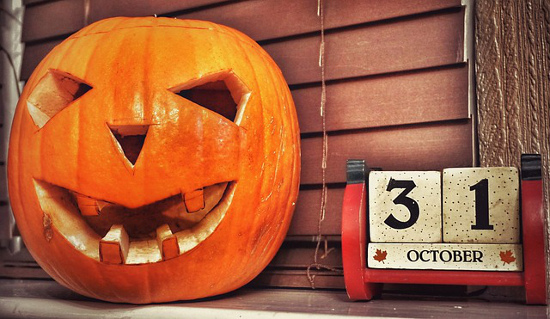 Image Credit: Original image shared by MK1_FIESTA on Pixabay with a CC License

Orange is the color of fire. Fire has long associations with Halloween. Use of fire goes all the way back to the ancient festival of Samhain which is believed to be what Halloween originated from.

At Samhain, bonfires were lit. The bonfires were thought to have powers of protection and were a stark contrast against a dark black, evening sky.

Fires were thought to be like the sun, holding back the darkness and decay to protect people. In this way orange, which represented the color of the flames, became the opposite of black. Orange is warm, protective and a positive color while black is seen as cold, dark and evil.

Fire is used to light up the evening of Halloween with carved pumpkins that have candles inside. These days, flameless candles can be used for safety. 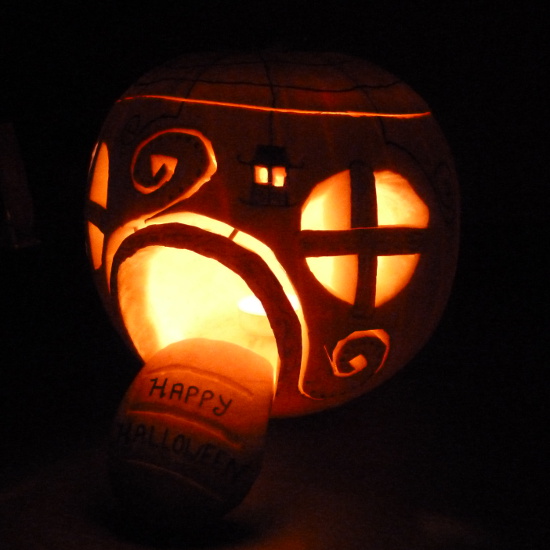 Orange is the color of many Fall motifs and symbols. The Fall season which Halloween occurs in is characterized by tree leaves which turn orange and scatter on the ground.

The Fall season celebrates the harvest bounty before the winter comes. This harvest season also has important links with the origin of Halloween.

Pumpkins which are a huge Halloween motif are bright orange. Before Irish people moved over to the USA, they used to carve turnips and potatoes.

When they got to America, they used pumpkins instead and that is how the tradition of carving pumpkins for Halloween was started. Carved pumpkins are called Jack O' Lanterns.

⭐ Orange means life, warmth, joy, happiness. It is a highly positive color and is associated with success and creativity. It provides the positive balance in contrast to its partner of black.

Other Halloween Colors and What They Mean and Symbolize 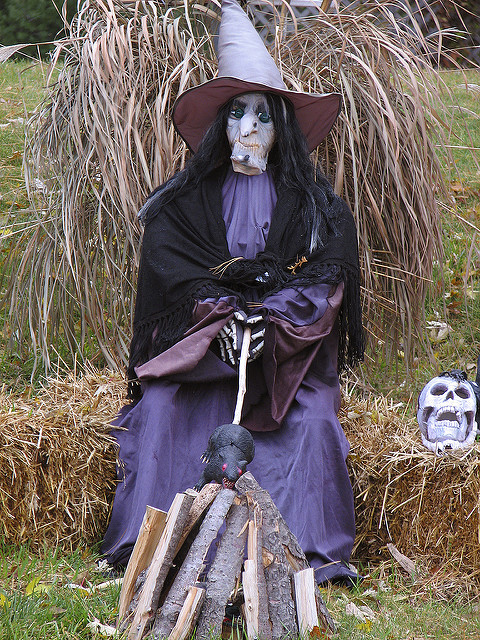 Image Credit: Shared by P J Nelson on Flickr with a CC License

Purple is associated with witches and also wizards. It is a color that has links to all things mystical, supernatural and magical. Evil witches are often depicted dressed in dark purple which is often used along with black and even green.

Purple is a color linked with powerful people. Because purple has been a rare color to find naturally occurring in nature, it was traditionally used to dye clothes for only the most powerful and important people. In Roman times only the Emperor was permitted to dress entirely in purple.

⭐ Purple is a highly mystical color with links to magic and supernatural things. It stands for royalty, power, mystery, creativity and also luxury. 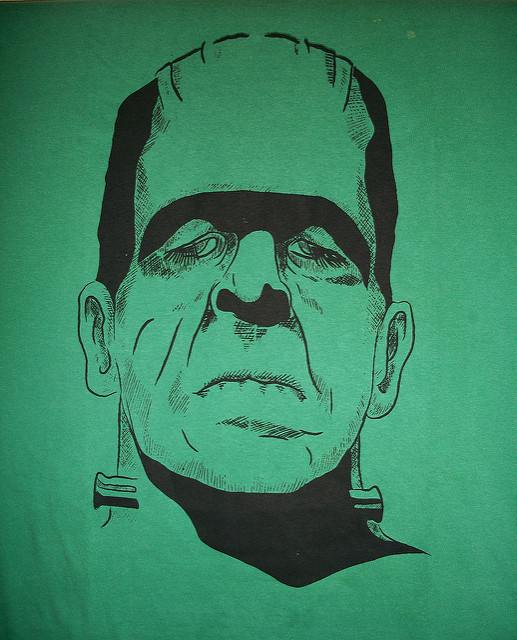 Image Credit: Shared by Luis Baron on Flickr with a CC License

Bright green is a really eerie color.Green is found in nature all the time but bright glowing greens are very unnatural so no wonder these bright, sometimes glow in the dark, shades are used for all things eerie, scary and spooky.

Green is associated with so many Halloween monsters. It is the color often associated with the monster Frankenstein, aliens, zombies, furry monsters, goblins, trolls and evil magical creatures. Evil cats are often shown with bright green eyes as well as demons. 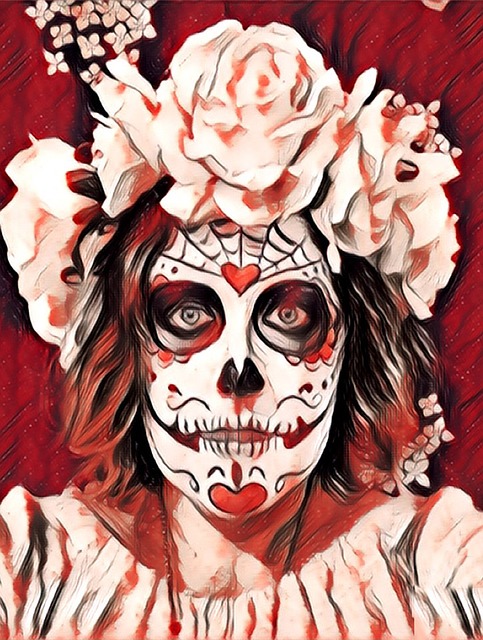 Image Credit: Original image shared by grayartist on Pixabay with a CC License

Red is the color of blood. Blood has long associations with Halloween. There are many links with blood sucking creatures such as vampires and bats as well as devils. Evil witches, wizards and sorcerer's may also use blood in dark spells and potions. 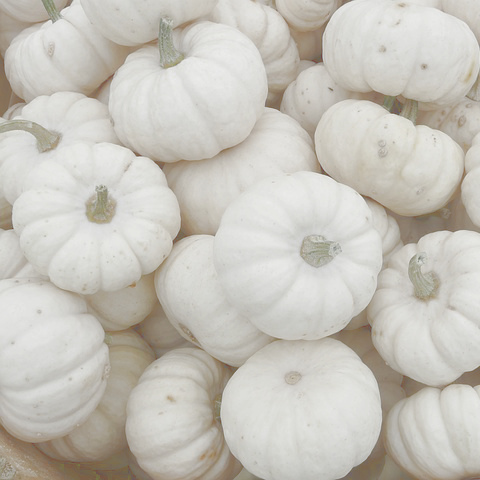 Image Credit: Original image shared by Hans on Pixabay with a CC License

White is the color of ghosts, ghouls and spirits. White is normally a positive color associated with all things pure. For Halloween it has a very eerie quality. White becomes spooky as we associate it with the undead. White is linked with souls who are not at rest and come to haunt us. White spirits who float around at night.

White is the color of skulls, skeletons and bones. Here white is linked with the opposite color, black. They both have connections with death and the dead.

⭐ White is normally a positive color associated with purity and all things clean and good. For Halloween white symbolizes emptiness, coldness, death and mourning and also unfriendliness. It can have a very sterile quality when used too much.

🎃 Specific Shades of Colors That Can Be Used at Halloween 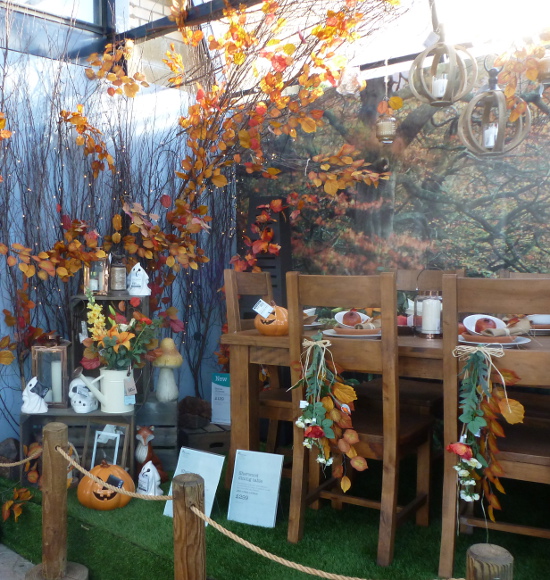 Although I've gone through all the main colors used for this occasion, there are some specific shades that can also be used to good effect. Yellow, for instance, is normally warm, happy and inviting. But a very bright, almost florescent yellow, can work really well and is often used for "Keep Out" signs in relation to Zombies and as danger and health warnings.

Midnight blue is a very mystical color also used in connection with powerful wizards, sorcerers and magicians. This dark shade of blue has many meanings related to that of purple.

Shadow gray and, in fact, any dark gray tones are a fashionable shade that often is teamed up with orange for Halloween. Its a very modern look that you can use in decorations and costumes.

Do pin, bookmark and also share this learning resource so you can get back to it easily again for reference. Come visit my Halloween resource pages listed below.

Plenty of Halloween Facts for Kids and Adults

When Did Trick or Treating Start?