Why Pumpkins Are Used for Halloween

A burning question that many people have this time of year is to know why pumpkins are used for Halloween. What is their significance and why are they associated with the Fall season.

Carving pumpkins to make them into Jack O' Lanterns and displaying them at Halloween is an age old tradition that actually originates from Ireland in Europe.

Discover how the pumpkin tradition started, how it came from Europe over to America and how it evolved into what it is today where pumpkins have a huge significance with the Halloween season. 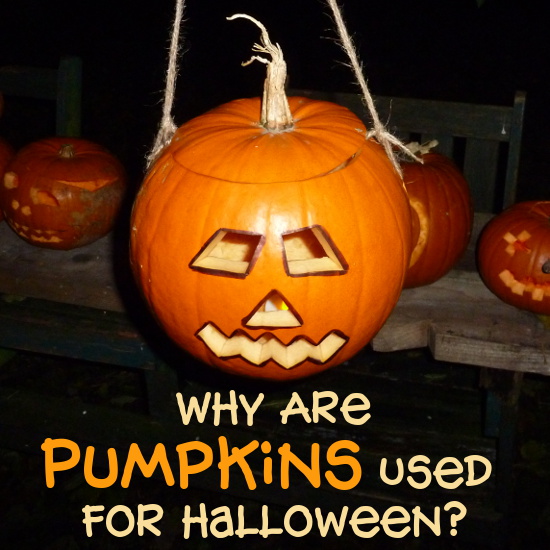 The tradition of carving pumpkins into Jack O' Lanterns is one that started hundreds of years ago in a small place called Ireland. Ireland is a small island just off the west coast of the United Kingdom also known as Great Britain and the UK.

🎃 On a side note, Trick or Treating also started in the UK and is not actually the American tradition that so many people wish to think it is.

Many people believe that carving pumpkins is an American tradition. However, as with many Halloween traditions, they actually started in Europe first. The origins of using pumpkins for Halloween started back in Ireland in the UK.

How Did Carving a Pumpkin Start?

Long before America was colonized by Europe, Irish people were carving scary looking faces into food that was readily grown such as potatoes, turnips and even large beets.

This tradition of carving scary faces into food crops spread. The Irish brought this tradition over to America from as early as the 1600's when they started to settle in the United States.

Turnips, potatoes and beets are much smaller than pumpkins and probably fiddly to carve. Pumpkins were readily available in America and they were soon found to be much better for carving so they were used instead.

What Were the First Jack O' Lanterns Made From? 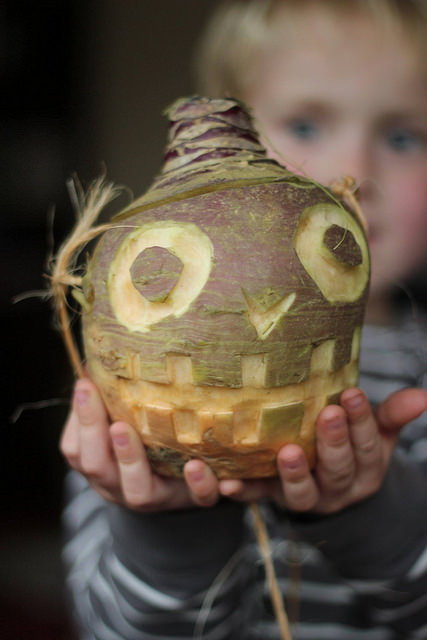 Carved turnip creation for Hop-tu-Naa, 31st October celebration, in the Isle of Man.

Image Credit: Shared by Culture Vannin on Flickr with a CC License

The very first Jack O' Lanterns were made with Fall harvest food that was readily available to the Irish people who started the whole pumpkin tradition.

Turnips, potatoes and large beets were traditionally used to carve scary faces into because that is what they could get hold of easily in Ireland.

These scary face Jack O Lantern's were then hollowed out to make lanterns that would light up the windows and doors. They were used to scare off any evil or bad spirits.

Once Irish people started to colonize America and emigrate there, they found that pumpkins were easy to find and much better to carve being bigger. So gradually pumpkins were used instead.

Pumpkins are a motif that is so tied up with the occasion of Halloween that it is difficult to visualize anything else ever having been used. Adults could test out carving other items like potatoes, turnips, gourds, rutabagas and beets to see which ones work best and get a feel for how this carving originally started.

Why do They Call a Carved Pumpkin a Jack O Lantern? 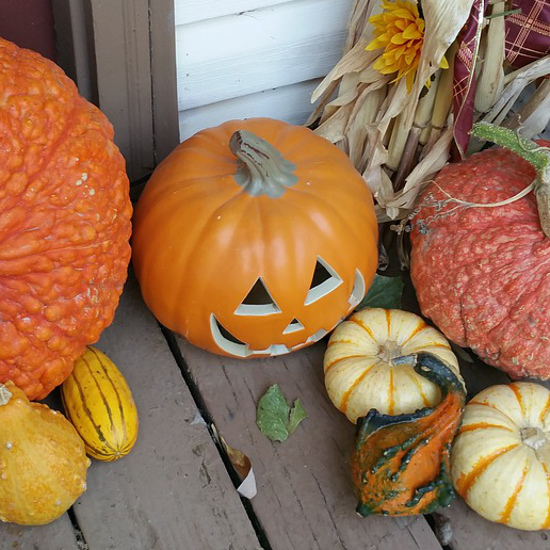 Image Credit: Original image shared by Sooz8 on Pixabay with a CC License

Now we know that pumpkins are used for Halloween because Irish immigrants coming to America brought their tradition of carving scary faces on turnips and used pumpkins instead.

Why on earth is a carved pumpkin called a Jack O' Lantern? This originates from an Irish myth known as the legend of Stingy Jack. There is a whole story about Stingy Jack.

Stingy Jack is a bad spirit that is said to wander the earth with a hollowed out turnip which is lit up to show him the way in the darkness. He was believed to haunt the nights like a ghost.

In order to keep this evil spirit away, Irish people would carve scary faces into turnips, hollow them out to place a light inside and pop them in their windows and around the doors to their homes.

These carved turnips soon became known as Jack of the Lantern which has been shortened to Jack O' Lantern over time. Turnips became pumpkins and the rest is history.

Why Do We Put Pumpkins Out on Halloween

Carving pumpkins originates from the Irish tradition of carving scary faces into turnips. They would hollow these out and light them up inside using burning coals or candles.

🎃 See How to Make a Pumpkin Fairy House

Originally, these scary carved faces were designed to keep evil spirits away by placing them in windows and around the entrance or doors to a home. Specifically in Ireland, they were used to keep the ghost of Stingy Jack away.

These days carved pumpkins are used as decorations. No longer do people use them at Halloween to ward off evil spirits. The tradition of carving scary faces into the flesh of this fruit has evolved into carving any design you like for the Fall season.

Pumpkins are sometimes placed in the window but more often they are placed around the door of a home and near the entrance. Instead of being a warning sign they are now a signal for welcoming Trick or Treaters. If you don't want Trick or Treaters then don't place a lit pumpkin outside.

Ideas on Decorating Pumpkins Without Carving Them

Much More on Pumpkins to Enjoy