Many people think or associate Sting as being the Hobbit Frodo's sword because that's how they still remember it from the classic The Lord of the Rings movies. But actually it belonged to Bilbo Baggins first. You'll discover loads of Sting the Hobbit sword facts on this page.

Bilbo passed this weapon on to his adopted heir and younger cousin, Frodo. They were actually cousins, despite Frodo politely using the term Uncle for his older relative. This weapon helped Frodo on his long journey and quest to Mordor with Samwise Gamgee.

The sword passed from one Hobbit to the other, from Bilbo to Frodo. Like many fans of The Hobbit movies and books by Tolkien, I enjoy learning and discovering trivia and facts on the topic. The weaponry is something that I'm just intrigued by. Learn lots about this iconic sword on this page. 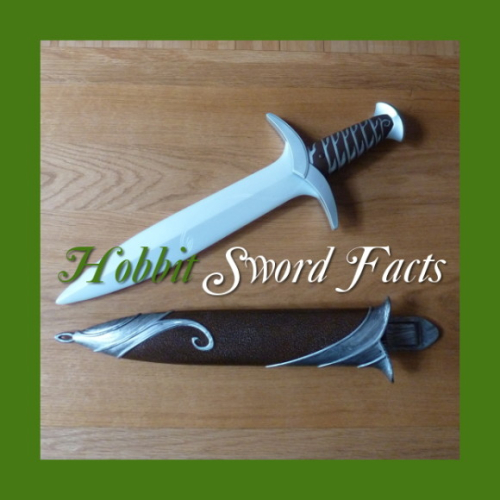 He took from the box a small sword in an old shabby leather scabbard. Then he drew it, and its polished and well-tended blade glittered suddenly, cold and bright. 'This is Sting,' he said, and thrust it with little effort deep into a wooden beam. 'Take it, if you like. I shan't want it again, I expect.' ~ Bilbo Baggins, The Fellowship of the Ring

Learn More on the Weaponry that Bilbo and Frodo Baggins Used

⭐ Fact 1: Sting is not really an actual sword at all. In comparison with the size of a human or Elf, this item was really comparable with a much smaller dagger or knife.

The smaller size of this was pointed out well in the Hobbit movie An Unexpected Journey where Sting is described by the dwarf Balin as a mere letter opener. But for a tiny little halfling character like Bilbo or Frodo Baggins, it made an excellent choice of weapon.

⭐ Fact 2: There is no sword inscription ever described by Tolkien although you see one across the blade in The Lord of the Rings films. This inscription was actually an invention for the movies and was not ever described in the original books.

The official movie replica weapon from The Lord of the Rings has "Maegnas aen estar nín - dagnir in yngyl im" running across the cross guard and blade.

These Elven runes are translated as: Sting is my name, I am the Spider's bane. This inscription is not present on the replica for The Hobbit sword from An Unexpected Journey and that is because Bilbo has not yet given the weapon a name. So that is where the replicas that you can buy really differ: Frodo's has the inscription and Bilbo's doesn't. 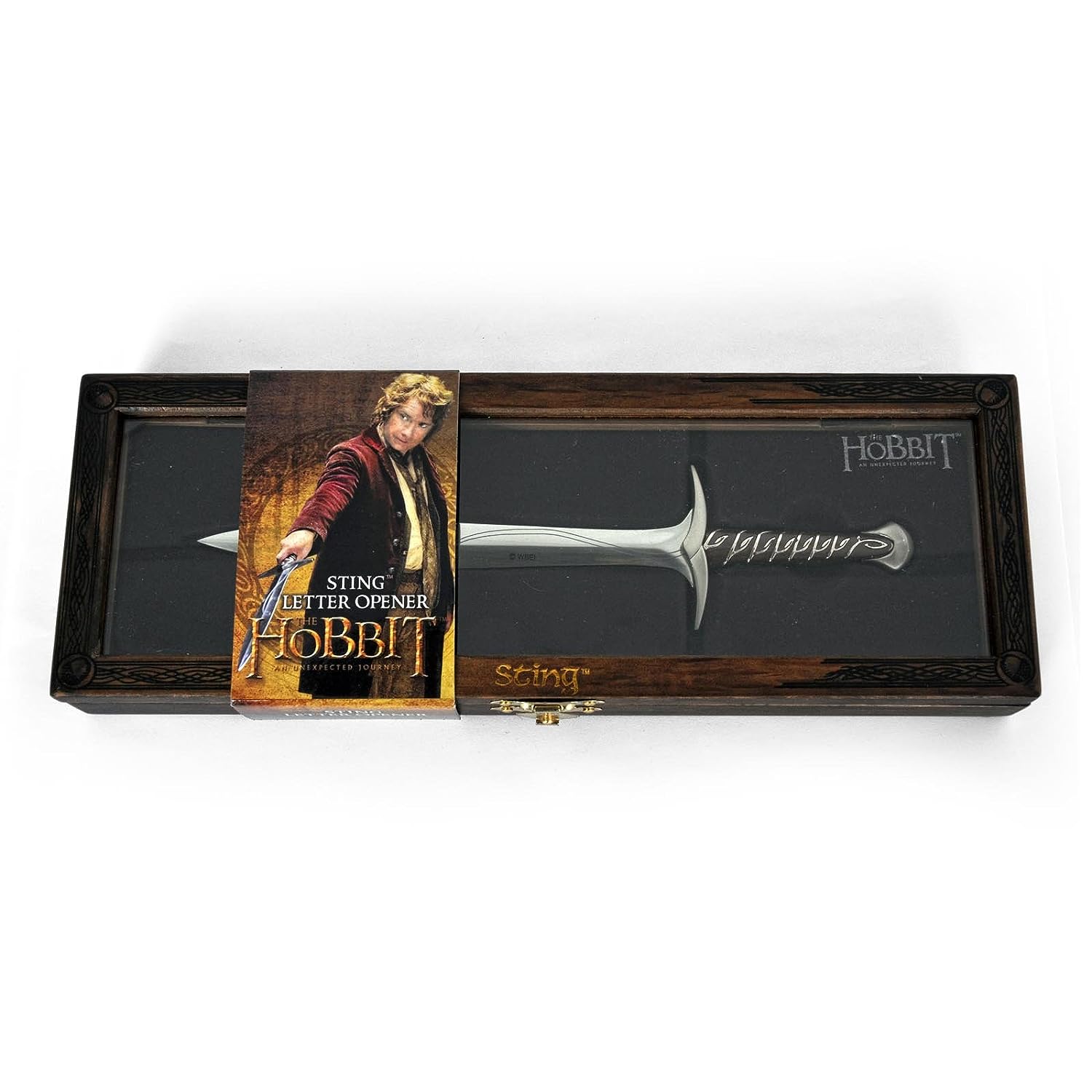 Get a Sting Letter Opener Reproduction from Amazon.com

UK Readers get a Sting Letter Opener from Amazon.co.uk

After Balin the dwarf's joke about Sting being more like a letter opener in An Unexpected Journey, this is even funnier. This should make a great keepsake gift in a wooden presentation box.

⭐ Fact 3: It was forged by Elvish smiths and has magical properties. One of these magical powers is that it glows blue in warning whenever Orcs or Goblins are near; that feature wasn't actually made up by the movie versions.

The beautiful collector version unfortunately doesn't have this particular magical property but you can get a toy Sting sword version which does. I have one and it is a lot of fun. Read on to learn more on this famous weapon.

⭐ Fact 4: Sting was discovered in a Troll's Lair by Gandalf, Thorin and Bilbo on their travels which you see in An Unexpected Journey. Two other famous Tolkien swords were found at exactly the same time.

These swords are Glamdring which Gandalf the wizard takes and Orcrist which is used by the dwarf, Thorin Oakenshield. These two are full sized swords whereas Sting is really just a dagger.

⭐ Fact 5: Bilbo used his blade to slay many Giant Spiders on his trek through the creepy Mirkwood Forest. We see this in The Desolation of Smaug movie. It was only after this point that he choose to christen his sword and attach a name to it.

For heroes of old it was common practice to give a weapon of great deeds a name. Spiders are a common theme in The Lord of the Rings too and the same weapon is used again against the giant spider called Shelob. 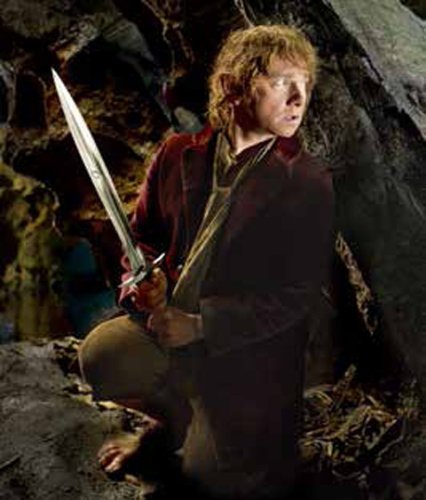 Get the Movie Replica Sword for Bilbo from Amazon.com

UK Readers get a Replica Version of Sting from Amazon.co.uk

Of all the merchandise that I really covet, it's this: Bilbo's replica version of Sting. I'd love one of these to mount on the wall.

Actually I'd like Glamdring and Orcrist as well but that's getting a little too pricey. Bilbo's version does not have an inscription of the Elvish runes. If you want those then you need to opt for Frodo's replica instead.

⭐ Fact 6: The creature Gollum hated Sting, calling it a nassty little sword. He was wary of it, perhaps because it was so ancient and magical, and both Bilbo and Frodo Baggins were afforded some protection from the volatile Gollum because of his fear of it.

⭐ Fact 7: Frodo officially gave Sting to his companion, Samwise Gamgee, on the last leg of their journey to Mordor. This was long after Sam borrowed or took the blade in order to protect his friend and master from the Giant Spider, Shelob.

➡️ Get EVEN MORE Facts and Info on the Hobbit Sword HERE 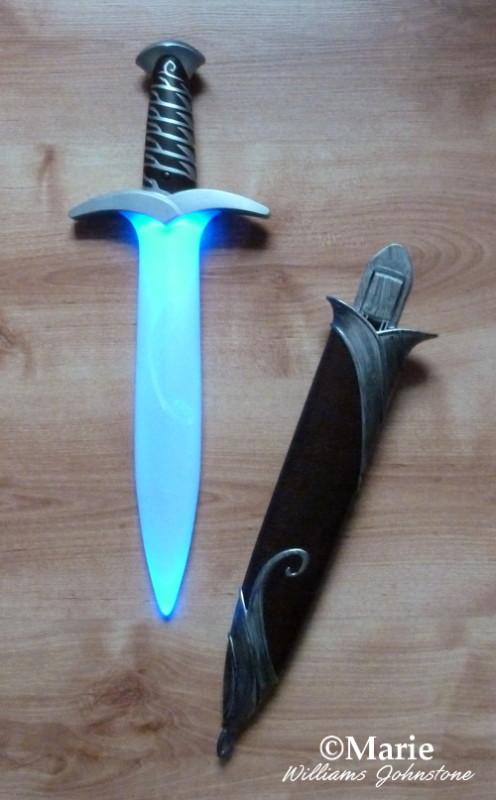 Clash, bang, wallop! This is a fab lights and sounds sword. How do I know? Because I got this for Christmas. My daughter and I both play with it quite a lot. We love the fact that the blade glows blue but even more fun are the battle sounds as you slice this or stab it through the air. It's a great toy and it makes a very useful and affordable costume accessory too.

My husband always tries to buy me something Hobbit related because I'm a big fan. The UK version came with a scabbard which looks good and means that you could wear this on a belt providing you have one that fits. For a costume accessory and dressing as Bilbo or Frodo, having a scabbard is a great idea.

The glowing blue effect on this is accessed by pressing a button. It looks better and clearer in the dark and I'm looking forward to using this come Halloween this year for trick or treating, I know the kids will love it. They'll all want one! But they're not getting mine, it's my preccioussss!

Bilbo's sword, Frodo's, Samwise Gamgee's ... Who does it really belong to? Just like the One Ring in Tolkien's fantasy tales, this item passes through many hands during the course of time. Magical items have a way of finding who they need to belong to at a particular point in history.

This beautiful but deadly artifact started out life being forged as a knife by the Elves of Gondolin. It was lost for a long time before it made its way to a Troll hoard and was rediscovered by Bilbo Baggins and his companions on their quest to take back Erebor, the Lonely Mountain, from the dragon Smaug.