In this Chronicles of Narnia songs facts page, you'll discover the best picks from the soundtracks plus reviews on the Chronicles movie scores. The movie music includes The Lion, The Witch And The Wardrobe, Prince Caspian and The Voyage of The Dawn Treader.

You'll also discover what the missing Narnia songs are on the soundtrack albums. As a bonus, you can listen to one of these right from this page. Immerse yourself in the ethereal and magical wonder world that C.S.Lewis created with his fantasy books.

I love the movies that have been made and also the soundtracks too. Let me give you a great rundown on those to show you what you should be listening to. If you like this magical world, come and visit my other Narnia pages which are listed near the end of the page.


Note: This post contains affiliate links for which I may be compensated.

The Missing Chronicles of Narnia Songs You Should Know About 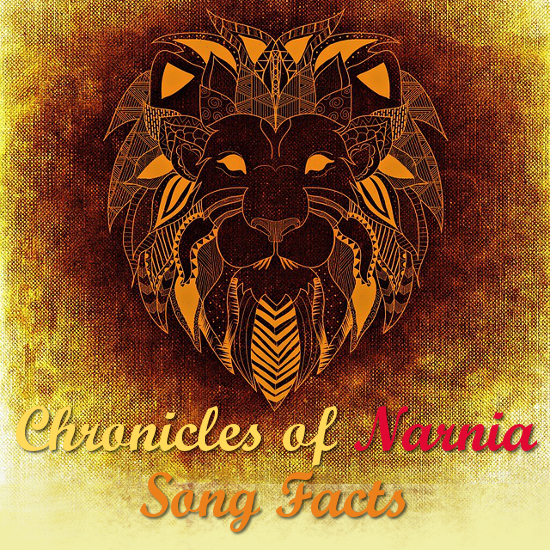 1: The Temptation of Lucy

Another fan called Karl asked me a question about an old jazz song that crops up in the third Narnia movie. There is indeed a song missing from The Voyage of the Dawn Treader soundtrack.

Karl asked: "I believe if there is anybody who can know the title of this lovely song it's you. Its in the The Chronicles of Narnia: The Voyage of the Dawn Treader. The part with Aslan and Lucy in Narnia 3 when she is looking into the mirror and is tempted by beauty. It's an old dance song I think from 40's or 50's era. I would be grateful to know the song title and artist of this dance song.

The missing song is: In the Mood by Glenn Miller.

"I didn't mean to choose all of that, I just wanted to be beautiful like Susan. That's all." - Lucy Pevensie

This is the part where Lucy looks into a mirror while on board the Dawn Treader ship. Lucy longs to be like her older sister, Susan, and is envious of her sister's beauty. She walks through the mirror and changes into Susan.

The scene includes some great Big Band music from the 1940's era. The song is called In the Mood by Glenn Miller and was a number 1 hit in the U.S.

2: Carrie Underwood's: There's a Place for Us

Right at the end of the 3rd Narnia movie, The Voyage of the Dawn Treader, you're treated to a beautiful song written and performed by Carrie Underwood. It's called There's a Place for Us and is sadly missing from the third Movie Soundtrack.

You can watch the video of There's a Place for Us on YouTube. Since it keeps being removed from there for copyright reasons, I won't link to it. But know that you can enjoy it that way at least.

I feel it is pretty scandalous that this was not included in the original soundtrack and I feel that Narnia fans were totally ripped off in buying the album when the main song wasn't even on it.

Narnia 1 Soundtrack: The Lion, The Witch and The Wardrobe

The Lion, The Witch and The Wardrobe soundtrack (2005) was composed by Harry Gregson-Williams who is well known in the film industry for his musical scores.

There are 17 Songs from The Lion, The Witch and The Wardrobe soundtrack and the total running time is 73 minutes.

The Lion, The Witch and The Wardrobe is still my favorite music from the Narnia movies and the album that I listen to the most. Out of the 3 movie soundtracks, this has the best overall selection of songs for me. The musical scores are beautifully enchanting and really encapsulate an aura of Narnia.

In particular To Aslan's Camp is the main track which I associate with the film. And the four vocal tracks are the perfect end to a spell-binding album. Can't Take It In by Imogen Heap is simply breathtaking and leaves you wanting more.

While The Lion, The Witch and The Wardrobe is my favorite of the 3 soundtracks available, Prince Caspian features the two songs which I can't stop listening to. I really love The Call by Regina Spektor and This is Home by Switchfoot.

What's nice about Prince Caspian is that strains of The Lion, The Witch and The Wardrobe music flow through the album which just strengthens the entire sense of magic and wonder.

Just like this second movie, the music is darker than its predecessor and in many ways much more meaningful. There's truly more musical depth for you to plunge into. It is bittersweet, beautiful and haunting. I really enjoy listening to it but I don't tend to listen to it as much as the first one.

Narnia 3 Soundtrack: The Voyage of the Dawn Treader

The Voyage of the Dawn Treader soundtrack (2010) was composed by David Arnold and not Harry Gregson-Williams who had worked his magic on the previous two soundtracks. David Arnold is a highly regarded composer who has scored several James Bond films, Stargate, Independence Day, and the TV series Little Britain.

There are 30 songs from The Voyage of the Dawn Treader soundtrack. This might sound impressive but the tracks are very short. The total running time is 65 minutes which is less than the previous albums.

The album features 30 musical scores by David Arnold. Disappointingly, Carrie Underwood's vocal played in the credits of the film (There's a Place For Us) is not on the soundtrack and can only be purchased via iTunes. As a fan of this franchise, I'm really cross about that.

The track should have been issued along with the album. Typical greed comes into play with making fans have to purchase this Narnia song separately and, worse, restricting it to iTunes too.

For me, The Voyage of the Dawn Treader doesn't have anything as special as the first two Narnia soundtracks. The musical score is good and there are some magical moments but nothing truly memorable. And leaving out Carrie Underwood's track from the official album was a total let-down.

I personally hope that the 4th soundtrack (when/if the movie ever gets made) will return to the magic of Harry Gregson-Williams. It is worth a listen. Some fans actually prefer this to the previous scores. But I'm telling you honestly that I don't.

It is by far my least favorite album from The Chronicles. The tracks, though good, are very short which means that just as you are getting into a piece, it finishes. Only worthwhile getting for real fans.

Of course, this is down to personal preference. If you disagree with these choices, then have your say in the comments section.

More on the Chronicles of Narnia