Learn how you can look like and dress like a zombie in 5 easy steps. In no time at all, you'll have a whole head full of ideas with this complete zombie Halloween costumes for adults guide.

You'll discover what a zombie actually is and what they look like in terms of clothing, hair and make-up. These creepy, creatures are always one of the biggest Halloween outfit choices and are suitable for both men and women to wear.

Don't worry that someone else might look the same as you because there are tons of variations on this theme and the help and inspiration on this page means that you are going to look scarily unique. Learn to dress just for the part of a Walking Dead creature.

Step 1: Zombie Halloween Costumes for Adults: Getting the Right Look

A costume based on this look could actually be anything at all because the outfit is whatever the person was wearing when they turned into a zombie. You can purchase a ready made adult Zombie costume or you can have some real fun learning how to dress like a zombie on this page.

Zombies are regular people, just like you or me. The only difference is, according to popular fiction, that they've come back to life. These Walking Dead characters traditionally rise up in popular media like movies so you'd expect their clothes to look shabby and dirty depending how long they've been underground for.

UK Readers get a Zombie Costume from Amazon.co.uk

Zombies rarely look neat and tidy. They're messy creatures and don't care where they crawl or roam and are likely to be covered in dirt. Here's some quick and dirty ideas on getting the look. Try these techniques on unwanted clothing: 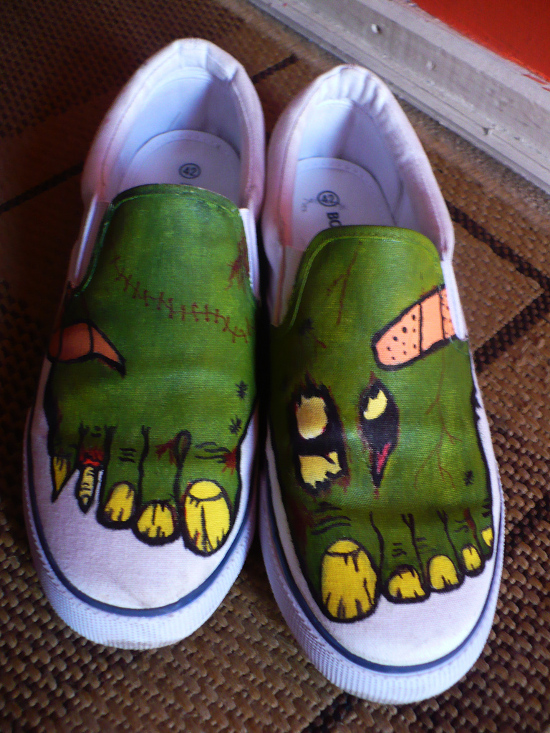 Get creative with marker pens and a pair of white canvas shoes to make your own style of zombie footwear.

Image Credit: Shared by Gonzalo Gallardo on Flickr with a CC License

Zombies would really wear whatever shoes or footwear which they had on when they originally became this way. So they could have bare feet, pumps, stilettos, trainers or even a plaster-cast at the end of their body.

Click Here to See My Page on Zombie Footwear

One idea that I love is having splattered shoes. If you get a pair of inexpensive canvas shoes then you can draw on red spatters using a permanent ink pen or splatter over thick red acrylic paint and leave to dry. You can also do this with t-shirts and other clothes which you're not going to worry about messing up.

Please don't add your own red splatters to any clothes or items which don't belong to you, like 'borrowing' something from mom or pop's wardrobe.

These creatures don't normally have neat hair. Hair is often shown as being grey and unkempt. Remember that these creatures might have been laying in the dirt so their hair isn't going to look all nice and slick and heavily styled.

Clumps of the hair might be falling out and it might have bits of mud stuck in it or other, less savory, things. If your own hair isn't going to fit the look, then a wig comes in really handy.

Choose a wig which really looks like the character has been rolling around in their grave. It should looks like an undead bed head. You could get a similar 'bed head' look with your own hair by adding a little styling product like gel and messing your hair up with your hands or doing a back comb on parts of your head. For the make-up styling, I'd recommend looking at YouTube and I've enclosed a video below for you.

As these fictional creatures are actually just regular people, you don't really need a special zombie costume for Halloween. This creature would simply wear the clothes it was wearing when it became that way which explains why you get doctors, brides and even ninjas in this theme.

So if you don't want to plump for getting a whole new costume, then don't. A mask, however, is a great idea and especially if you don't fancy playing around or taking the time to apply lots of fancy makeup techniques so you look just like the character.

UK Readers get a Zombie Mask from Amazon.co.uk

Latex masks should be aired out after purchasing because they can have a strong and unpleasant smell which you want to get rid of before you put it on. Be aware that some people are allergic to latex and, if in doubt, consult a medical professional about how to patch test for a potential latex allergy.

Step 5: Zombie Make Up and Cosmetics

Depending on what state your zombie character is in, it might have dirty looking skin and clothes that are torn and hanging off. Nails might be colored in blue or black for which nail polish comes in handy.

Get Some Walking Dead Zombie Eyes

You wouldn't expect these fictional characters to have nice, healthy looking skin. Their flesh might be paler than your normal skin tone and is often shown as gray. The skin around the eyes often looks sunken and hollow and this look can be made using gray, black and purple skin paints or eye shadow around the eyes, but don't overdo it or you'll look like a panda.

More on Zombies for Halloween